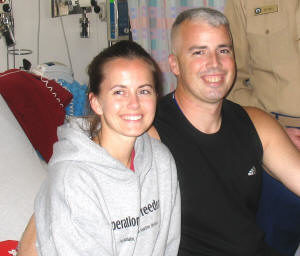 Sgt. Andrew J. Blackburn tried not to cringe as he lifted his frame further up on his 5th floor bed. Pain meds made that sniper wound easier to manage; still he tried to get the stress out before his wife Jennifer caught sight of his pain. She saw it anyway.

“I could exhale,” Sgt. Blackburn said of the moments after arriving at the National Naval Medical Center in Bethesda, MD on March 20 – the moment he knew Jennifer would continue to be taken care of by Marines throughout his stay there.

Whatever she needs, whenever she needs it. A ride to the airport, for instance. A cup of coffee. A ride back to the Navy Lodge because it’s late and she’s been at the hospital for the last 16 hours – not that she’d ask, she likes the walk. But if she wants it, Sgt. Blackburn knows he doesn’t have to figure it out.

By the time he arrived from Andrews AFB with lights and sirens on the ambulance, Jennifer had been flown in from their home in Kalamazoo, Michigan hours earlier. “You cannot say enough,” she said smiling at her Marine.

Many a Marine would rather face insurgents in Fallujah – badly outnumbered and low on ammo – than comfort a heartbroken father or confused child of Marine fighting for his life. Here, where the most seriously wounded find themselves, it is just such awful circumstances these Marine liaisons navigate others through. Day in and day out. For weeks on end. For healing, or not.

They’re not coming to it green, most definitely. Liaison Marines have volunteered and vied for these slots, because they’ve often been combat wounded themselves.