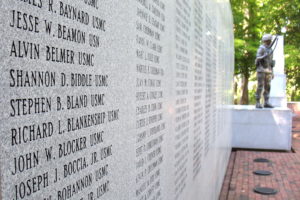 Eleven Years Ago CorpsStories Was Borne. Eleven Reasons We Remain.

1.   Great Marines, great unsung Marines, keep coming. Keep being brave and selfless and kind and happily willing to die for us.

2.      Selfless loved ones, selfless supporters keep coming. Keep giving and helping and understanding and fighting and speaking up for our Marines.

3.      Freedom of Religion allows us to write about the faith of Marines, in whatever form they live it, they share it, they act on it. We serve to honor their heart for God, and will not force their forms of faith into any religion or other manner of order.

4.      Freedom of the Press coupled with the Internet has made their stories available almost anywhere on the face of this earth. No need for a printing company, publishing house, paper, postage, waiting for the mail.

5.      That same Freedom allows that we write about Marines. There is greatness in Americans of many notable and honorable titles, yet we do not, and will not, broaden our literary scope.

6.      That same Freedom allows that how these Marines influence this editor’s feelings, opinions and actions for the better is worthy of publication. They have improved her and she will say so.

7.      Freedom of Speech allowed this reporter to become this editor. The Marine is the story, his or her efforts the lead and the end. No higher governmental organization directs our mission.

8.      That same Freedom has allowed that CorpsStories be highly biased – biased in favor of the Marine’s actions for good. We serve to inspire via factual storytelling, period.

9.      That same Freedom allows that never a passing thought is given to publishing the poor actions of Marines. We never have. We never will.

10.  CorpsStories will not live forever. Until her end though, she is sailing under the winds of less than a dozen Marines who’ve not allowed her mission and destiny to be abandoned.

11.  Those eleven Marines, especially one, know who they are.