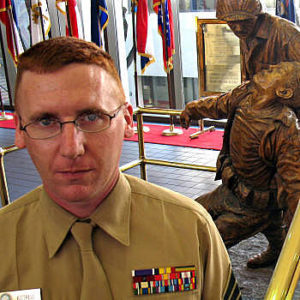 “Quite simply, Sgt Kittrell is the type of Marine Sergeant that Marines look up to regardless of rank. Juniors look up to him for being the prototype Marine NCO who is always either teaching about combat or leading Marines in combat. They confidently follow Marine Sergeants like him into battle. Seniors look up to him for his confidence and his loyalty to his Marines. I was privileged to have fought next to him, shoulder to shoulder, against those that wish us our nation harm. He has the heart of a Lion and the type of Marine NCO that legends are made of. He will remain in my strongest prayers.” (click here for CorpsStories exclusive interview with LtCol Khan on that mission.)

Sgt. Kittrel stayed in the fight with 1/6 returning after being medevac’d out of the Afghan mountains due to an ambush that he and others fought ferociously through. He fought on when later in Iraq he was exposed to upward of a dozen IED explosions. Symptoms of traumatic brain injuries surfaced upon his return to Camp Lejeune last year.

“Now that Iï¿½m almost on the other side of [his own medical treatment], it is how much goes into care for each service member. When one arrives everything goes into high gear. Itï¿½s a way to still be there for them.”

His Marine passion and fortitude floats right to the surface. “Things happen for a reason sometimes. The bottom line is Iï¿½m still taking care of Marines.”