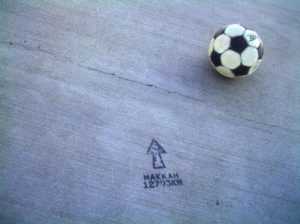 More of the Same

(Photo: A recreation area and a painted directional arrow to Mecca in Camp Delta, GTMO. Photo by John S. Pappas)

Editor’s Note: John S. Pappas is the editor of CapitalNewsServices.net and was a guest of Corps Stories on a media visit to Guantanamo Bay, Cuba in January 2006. He specializes in socio-political commentary. We are

very grateful for his astute thoughts in this piece.

The terrorist detainees at Guantanamo Bay Cuba and their lawyers are playing the United Nations these days like an old banjo ï¿½ and the media appears to be only too happy to dance to the tune.

Earlier this month the United Nations released yet another call for the closure of GITMO, claiming that the facility is a violation of international law and a scar on the United States’ image as a defender of rights and freedom. The thrust of the UN argument for closing GITMO is that detainees are not being charged. The subsequent demand for GITMO closure is made despite the knowledge that the detainees would have been charged but for awaited Supreme Court rulings, which preclude the U.S. from doing so.

The media, ever faithful to the ideal of slighting the administration of George W. Bush has reported the UN appeal as if it were news, and not a re-assertion of their oft-stated viewpoint.

The detainees since they arrived at GITMO have abused the U.S. forces tasked with guarding them, used lawyers highly sympathetic to their plight to claim torture, and then staged actions the detainees know will be reported by the press. This strategy of claiming torture that has not occurred is taken directly from an al Qaeda field manual captured from an al Qaeda cell in Manchester England.

ï¿½At the beginning of the trial … the brothers must insist on proving that torture was inflicted on them by state security before the judge. Complain of mistreatment while in prison.ï¿½

And while the U.S. commanders at Guantanamo Bay continue to reference this to the media who visit, it is surprisingly absent in most stories regarding the detainees and their actions. What happens instead is the type of coverage we have been subjected to this past week, such as the following excerpt from Carol J. Williams in the Los Angeles Times:

ï¿½Anguish among the detainees – all but 10 held without charges for as long as four years – was apparent Thursday when four detainees attempted suicide and detainees in the least restrictive facility attacked guards when they attempted to rescue a man trying to hang himself.ï¿½

The Times would have us believe that the detainees were in anguish to the point of attacking the guards who sought to save the life of their fellow detainee. What the Times fail to tell us is the calculated manner in which this incident occurred. Prior to the so-called suicide attempt the detainees smeared the floor with feces and urine which caused the guards who responded to the attempt to slip and fall upon entry. The detainees, who had weapons fashioned out of things like fan blades, attacked the guards immediately. These actions demonstrate a planned calculated operation and took longer to orchestrate than a few moments after one of their companions decided to commit suicide.

The Times readily reports that four such suicide attempts have occurred of late, but will tell us as an afterthought only that none of these attempts succeeded. In fact no detainee has managed to die while in U.S. custody in GITMO.

Detainees act out on dates of significance and important religious holidays and during periods of high news coverage of GITMO. One needs only to look to a calendar and news reports in order to accurately predict detainee behavior in Cuba.

This past Christmas season we were treated to reports of detainee hunger strikes in GITMO. The media likewise reported on the force-feeding of detainees. The UN picked up quickly on this and denounced the inhumane treatment of the hunger-strikers by the U.S. – which itself became a centerpiece of the last UN call for GITMO closure. When the season and news-cycle had passed nearly every participating detainee abandoned the strike.

Since the detainees arrived at GITMO we have been subjected to false claims and actions by detainees and misleading reporting by the press. Lawyersï¿½ claims of torture have consistently proved baseless ï¿½ despite full and thorough investigations. Media reports of abuse of the Holy Quran were subsequently retracted ï¿½ the truth being that it was individual detainees themselves who abused the Quran.

While the press is quick to report these things they never seem to follow-up when the allegations are proven false, the hunger strike ends, or the suicide attempt turns out to be staged. We arenï¿½t told how guards are continually assaulted with feces and urine and violence and yet do not respond in kind. They fail to tell us that detainee actions appear to be cyclical and calculated. They donï¿½t seem to mention that in visiting GITMO (hundreds of reporters have done so since President Bush invited them en mass in 2005) the detainees appear healthy and well fed. They still include pictures of Camp X-Ray with their stories ï¿½ pictures that show detainees kneeling on gravel in orange jumpsuits ï¿½ never mentioning that the camp was open only two and one-half months in 2002 and was never meant to be permanent housing. They hardly report that the U.S. believes it has disrupted attacks domestically and abroad based on detainee information and that when the London subway bombings occurred – detainee information was instrumental in discovering those responsible.

We never hear of the special meals detainees receive in order to keep them healthy, or of the priority medical care the detainees receive (even over that of U.S. forces). Nor are we told much about the call to prayer the U.S. supplies in Arabic along with an arrow in every room pointing towards Mecca to assist in their prayers.

Instead we are treated to more of the same.