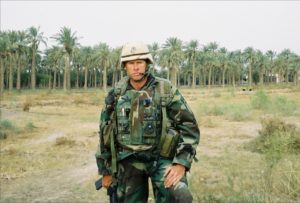 Iï¿½ve learned Extreme results demand extreme thinking and training. As part of a six man recon team, you are expected to infiltrate into the enemyï¿½s territory observe him, and exfiltrate without getting caught. This demands an attention to detail mindset, physical endurance, and specialized schooling. The responsibility on a recon team leaderï¿½s shoulders are much more than on his counterpart in a more conventional setting.

The rewards are greater too, specialized pay, and independent spirit, and knowing that you are one of the few reconnaissance types who can do this for a living and not live the drudgery of a more conventional Marine Corps life.

In turn though, other Marines sometimes misunderstand you. They think you are extreme, and they mistake your confidence for cockiness. They will always look for a way to justify their selves for not being a reconnaissance type, and remind you that they are just a much a Marine as you (which is true.) While they are worried about doing a physical fitness test, you are getting ready for your quarterly 12 mile 50 pound ruck run. While a group of 180 Marines are checking their rifles, night vision goggles and gear prior to a night attack, your five men are checking HF, UHF radios, digital cameraï¿½s, digital terminals, crypto, and making sure that your nautical charts are good to go prior to an amphibious swim into a 4-day mission without an Officer or senior Staff NCO present. Parachuting, diving, demolitions, and close quarters combat are all part of the training, day and night. More fun, more responsibility, more rewards, more satisfaction. This may mean going to Ranger school, and taking a chance and ruining your reputation, losing weight, and sleep. This may mean going to Combatant dive course, where you have to do a 6.2 nautical mile swim, and countless night navigation swims in cold water. This may mean that you must patrol many square kilometers of terrain wearing a 60-pound ruck, in frigid cold, or hot energy sucking weather. All this so you can be part of an elite group.

So it is with living the life of faith. The effective life of faith demands that you live a life of freedom from what other Christians would normally put up with. Sickness, disease, lack of power in prayer, failure in business, lack of finances, and other things are not to be the normal routine for you.

This means extreme thinking, and doing will become your lifestyle. Itï¿½s not really extreme, but to some ï¿½Christianï¿½ friends, and family it is. Running with boots, running with a back pack, swimming in the ocean in February, doing an hour of calisthenics, and being fiercely loyal to your unit, are all extreme to some people but serve to build the heart of the warrior, and make you a more effective one.

Examples of extreme Christianity are as follows: Making sure that the words that come out of your mouth align with the scripture, tithing, giving money to missions, buying a homeless guy a chicken dinner, and then eating with him, pleading the blood over each member of your family at night and in the morning, believing and praying for a healing, listening to preaching CDï¿½s on the way to work every day, listening to praise music, reading your Bible on an airplane, taking communion in your home, taking dominion over a bad circumstance, building prayer checklistï¿½s and building victory notebooks. Your religious friends, family, fellow Marines and the world will say your extreme. Are you really? If you are debt free, free of sickness, your prayers get answered, and favor always surrounds you, and when a storm approaches you donï¿½t talk scared, then you are a testament to the fact that Jesus is alive today.

It pays to be an extreme Christian who lives by faith. Iï¿½ll never buy into dead religion. It has come too late for me. My children, and family will be victorious, prosperous, healed, mighty men and women of valor, who will set this world on fire for Christ no matter what the nay-sayers may say. The world will have what they say and believe, and my family will have what they say and believe as long as it is based on the word. A free man is always envied. Being an elite soldier is just like the life of faith. It is a way of life that infiltrates everything you do, and affects your whole outlook. Iï¿½ll never again be conformed to the world, religion, or the join the masses that live in bondage to the things that the Bible says you donï¿½t have to. This way I can effectively advertise Jesus Christ.

When choosing between ineffective religion, and any belief that overplays Godï¿½s sovereignty, or choosing to live the exciting faith filled life that really helps others, and correctly advertises Jesus Christ, the choice is obvious for me!

As a father, you want the best for your children, but also want them to succeed and value your word. God is our Father, and heï¿½s no different. As for me and my house, we will serve the Lord in this way.