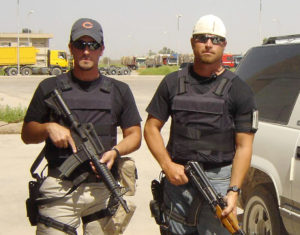 Editors note: Phil Otto wrote the cover story in December’s Soldier of Fortune magazine about his Iraqi experience. He generously contributed this piece for CorpsStories readers.

I was asked to place my experiences and emotions about my best friend down on paper.  It without a doubt is the hardest thing I have taken on to date.  I mean, how am I supposed to reduce a man whom I admired, and shared the best and worst times of my life with, to paper?  This is how.

I remember meeting Bobby for the first time at VMGR 252 in Cherry Point, NC.   I was the new guy to the shop, but not “Boot” as some Marines with the slightest bit of salt would say.  I had served four years in the Infantry with Combat Instructor Company at Quantico, VA. and 2Bn  2nd Marines 2nd Marine Division at Camp Lejeune, NC. I was also assigned to 22nd MEU (SOC).

When it came time to re-enlist, I fell into a job that would have me sleep in a bed every night, and not in a sleeping bag, and not have to be wet and cold for days on end.  I had found that subtle tenderness while working on KC-130 aircraft as a Safety and Survival Mechanic.   The work center I was assigned to had a man in charge of it with almost the exact experience in the Corps as I had. As soon as we exchanged subtleties we hit it off.  Just out of coincidence both of us were MOS 0311(rifleman) and then reenlisted into the some occupation and ended up in the same unit.  It seems like small, insignificant coincidences, but for military occupational specialty with about 75 members, total it was unique.

In order to speed up the story and to keep you (the reader) involved, I will summarize our relationship the best I know how.  Bobby was close to me.  I knew his wife and his son.  I had even watched his son on occasion and he had watched my son.  My wife and I went to cookouts and gatherings at his place etc. While we were both separated from our wives at the same time we shared our thoughts and a beer or six talking about how good it was to be free, but at the same time wishing we were not.

At one point Bobby and I formed a team to compete in a 60-mile multi event endurance race at Ft Bragg, NC.  About three months preceding the race we took every lunch hour to run, canoe and/or hike with 40 lbs in our packs and then do it again after work leading to total exhaustion and collapse as soon as we got home.  We competed in the race that cold November day just to say we could and we did.  We finished the race after twenty-two long, grueling hours just to have something to talk about afterwards.

I remember the time we were chewed out by our SgtMaj for trying to go to SERE school via a black market, ‘know someone’ kind of deal.  The aircrew required to attend always tried to skirt the course because it caused hunger or something, and here we were getting our asses chewed out because we wanted to go.  I guess the grunt was still in us even though we were maintenance monkeys now.  We kept a good relationship with the SgtMaj after that, I think he may have thought well of us, too.

Well, in December of 2002 Bobby left the Marine Corps and moved to Newport News, VA, working for the TSA at Newport News International Airport.  I left the Corps in January 2003 and worked for a police department in North Carolina.  I also happened to join the National Guard as an Intel Analyst and Bobby joined the Army Reserve as a Military Policeman and deployed to Iraq for a year in 2003.

One day Bobby called up and had another hair-brained plan.  The one thing anyone knew about us two is that when we got together we came up with outlandish goals and ideas.

One time we were going to get a mail order helicopter kit, build it and then fly it.  Now why would we do something like that?

Anyway, Bobby called me one day while I was in Arizona and said “ Dude, we are going to Iraq” I had to hear the rest of this.  He went on saying we will join a company providing security as civilians and have the best of both worlds.  We will carry a gun and get shot at, without the military rules of getting haircuts and shaving, it will be a blast.  Of course I said, “when are we leaving?”

It was exhaustingly hot, the air felt like a blow drier burning the skin on my cheeks, it was one hundred and twenty six degrees on the thermometer of the Suburban.   I was in the back seat with Bam Bam (call sign) and Bobby was in the front passenger seat.  Everyone was quiet, the radio was playing our favorite rock music and we had our weapons trained to the outside world from our vehicle.  It was an eerie contrast of tranquility and calm compared to what the environment was capable of unleashing to kill us.  Iraq can be hell and it can be not quite heaven, but just another place on the map.  One second is warm, calm and quite, the next it can be dust, debris, charred bodies, blood, fire, searing metal and chaos.

Our team was on another mission escorting cargo trucks that were aiding in the reconstruction effort of Iraq.  We had been on many of these, some were easy money and others we were lucky to enjoy a beer at the end of the day.  On one particular mission we were ambushed by automatic weapons (AK47’s) and one Rocket Propelled Grenade launcher. To make it short and sweet if it was not for Bobby and Cuda (call sign) putting accurate fire on a few evildoers, I would not be here typing this story.   We loved our job, it was excitement and danger without military haircuts.

Bobby and I had planned from day one getting into Iraq that if we made it back we would take our sons to Disney World for a week, and then be in a partial drunken stupor for the next week.

August 1, 2004 started out like any other for us.  We went over our mission for the next two days, again escorting trucks up near the Syrian border and back again taking us through the infamous Sunni Triangle and other less than glamorous areas of Iraq.

We put on our body armor and load bearing vests, loaded our weapons and jumped in the trucks and headed off.  The trip started out like all the others, white knuckled hoping your vehicle would not disintegrate from a roadside bomb and hoping the same for the rest of your team.

We had a couple trucks break down as usual and Bobby’s truck had run out of gas.  Bobby had his driver calmly pull into a random Iraqi gas station North of Tikrit, pump gas, and Bobby then cool as ice walked in with his weapon and body armor and paid for the gas with five American dollars.  He said the owner tried to give them the gas for free, but Bobby could be pretty persistent to do the right thing.  That was the last time I would hear Bob’s voice on the radio.

Not long after that, Bobby was leading our convoy from the front and we were about 90 kilometers South of Mosul.  Bobby’s vehicle was hit by a roadside bomb (IED) and it instantly killed his driver, and the cargo truck driver and passenger behind them Bobby was mortally wounded and two other Americans were injured as well.

Unfortunately Bobby did not make it to the medical facility, which took us an hour to get to.  The other two made it, one of them had serious but non-life-threatening injuries, and one made it with about two minutes to spare, thank God.  Bobby in his cool surfer guy fashion did muster enough strength after being mortally wounded to place himself in a vehicle, adjust the air conditioning vent and remove his sunglasses, and then passed away.

I find it hard to place this man on paper and what he meant to me; only Bobby and I will know that.  But what I can do is give people a taste of that.

Bobby was one of the greatest men I have ever known.  He lived everyday like it was his last and also like it was his first.  He was a courageous warrior matched with a kind heart.  He had an alluring personality and was an excellent father.

I have learned a lot from him and have a better grip on who I need to be because of who he was.  The only thing I question myself about is if he would have thought the same of me.

To Bobby; if you get this, guard Heaven’s streets and I will see you on the next mission, rest in peace brother, I love you.