More Than A News Story – A Journalism Project

The problem with spending time with Cpl. Kenny Kalish, USMC, 23, is that one must remind themselves he has lost his legs and left arm.

His personality, intelligence, consideration of others and sense of humor so consume one’s attention that his physical differences become invisible.

Such circumstances are exactly what CMO’s founders want to occur. They want us to see Marines like Cpl. Kalish the way they do: as the able, capable, selfless Marines they are.

Near an outdoor market in Afghanistan on April 7, 2011 the corporal, while on patrol with his bomb-detecting canine, Fynn, stepped on a 10-pound IED pressure plate.

Since then he’s had many surgeries and thousands of hours of rehab.

​She’s a proud mama. Doris Kalish, the corporal’s stepmother, speaks in a soft Texas accent. Quickly determining friend from foe, she welcomes newcomers to her stepson’s world with a warm hug. She looked at him and shared how tall he was, and will be again soon with his prostheses. Six-foot two, she said with a happy, gentle confidence.

She’s been staying near BAMC for the 11 months since Cpl. Kalish, “got blown up,” his words. Doris and Cpl. Kalish’s father, Michael Kalish live in Tomball, where the corporal spent much of his childhood. He also lived in Hutchinson, KS, where he graduated from high school.

Her eyes lit up for his departure with CMO, jubilant for his opportunity to get away. Upon his return she’d be helping him move away from the barracks into his own apartment.

No ordinary request would allow him his own apartment. It required a need. A need borne of a miraculous turn of events.

A Marine will cry over the loss of his dog long before the loss of anyone else. In Cpl. Kalish’s case, any tears would only be those of joy.
Cpl. Kalish’s sensitivity toward children and animals was ever-present on this CMO hunt.

His heart this way is not new. It was such that kept his working dog companion, Fynn (right) from injury that day.

Fynn had spotted six IEDs which the corporal removed throughout a long day. Cpl. Kalish decided Fynn needed to rest, then put him in the vehicle. Less than five minutes later the corporal was horrifically injured. That was the last time he saw Fynn.

Any day now, in the Spring of 2012, almost exactly a year away, Cpl. Kalish will reunite with Fynn. Permanently. 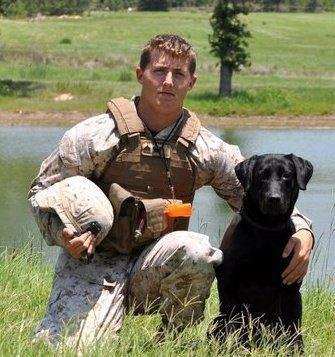 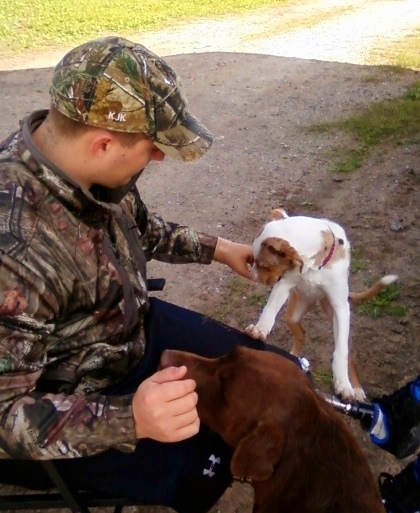 A kennel in North Carolina contacted Doris Kalish through a Facebook page supporting the corporal, saying they believed a Black Labrador in their care was Fynn.

Fynn had continued working for the Corps after that April 2011 day, but had been retired and was now amongst his own at this kennel.

Verified by a tattoo matching him to the corporal’s Fynn, wheels started turning. Very soon now the apartment Cpl. Kalish occupies will be for him and Fynn.

Fynn will be retrained as a working companion to his Marine.

One must be ready to play hardball when entering into playful banter with this Marine.

“Shenanigans” is inked atop his right bicep and no other word would better describe the verbal needling he can deliver. Funny, yes. Restrained with good taste, no.

He is a kidder, will pull no punches when seeking to engage any comer with merciless teasing. Long hours spent travelling between BAMC and GKR one might opt for other means of torture than this corporal’s relentless joking.

He does know when to stop, but will have the last word – so don’t even bother trying. 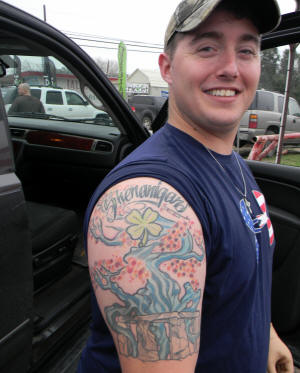 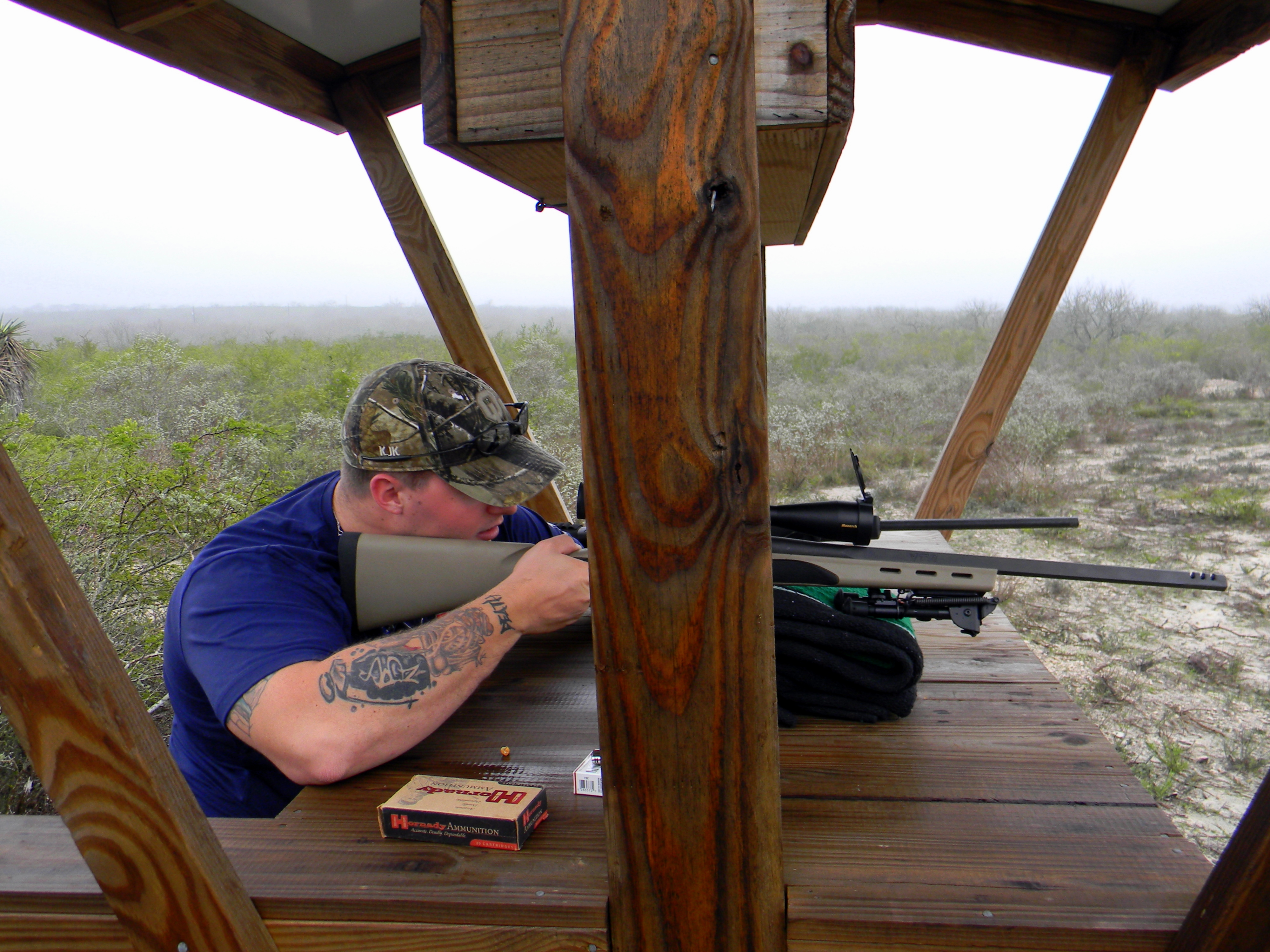 The first order of business was target shooting. Cpl. Kalish brought a .308 which served him well, an understatement.

Along rolling hills of Mesquite brush, cactus and sand – and after hours on the road, the corporal hit a one-inch fluorescent orange dot nicely. Twice.

Prostheses have had no negative impact on this Marine’s marksmanship.

Cpl. Kalish is a complicated man.

A look into his eyes one finds a tremendous amount of what appears to be grief. His actions don’t betray him, nothing he says or does indicates emotion. But his eyes tell.

He’s been dealt a new hand of cards. He’s sorting them out. And it appears consideration for others is his ace to recovery. Likely this has been a life-long method.

He shared with pride all his father sacrificed to raise a family as a single parent. He is glad that of the six Marines wounded that day, his wounds were the most severe.

He is a corporal of Marines – an important rank, which he earned in just 32 months. He is a leader; happy to carry the burden and to have taken the brunt.

Make no mistake, he’s still a young man. Pictures of pretty, curvy blondes smiling while sitting on his wheelchair-bound lap circulated well. Yet those pictures kept their place: unlike everyone else, Cpl. Kalish never once brought his phone out on the hunt.

And the, “are you mad at me?” texts that long awaited his return to the ranch house raised a happy chuckle.

Because of the height of this blind, Cpl. Kalish, accompanied by Collard, took a back-hoe elevator (right) up to the platform, where Doc awaited. 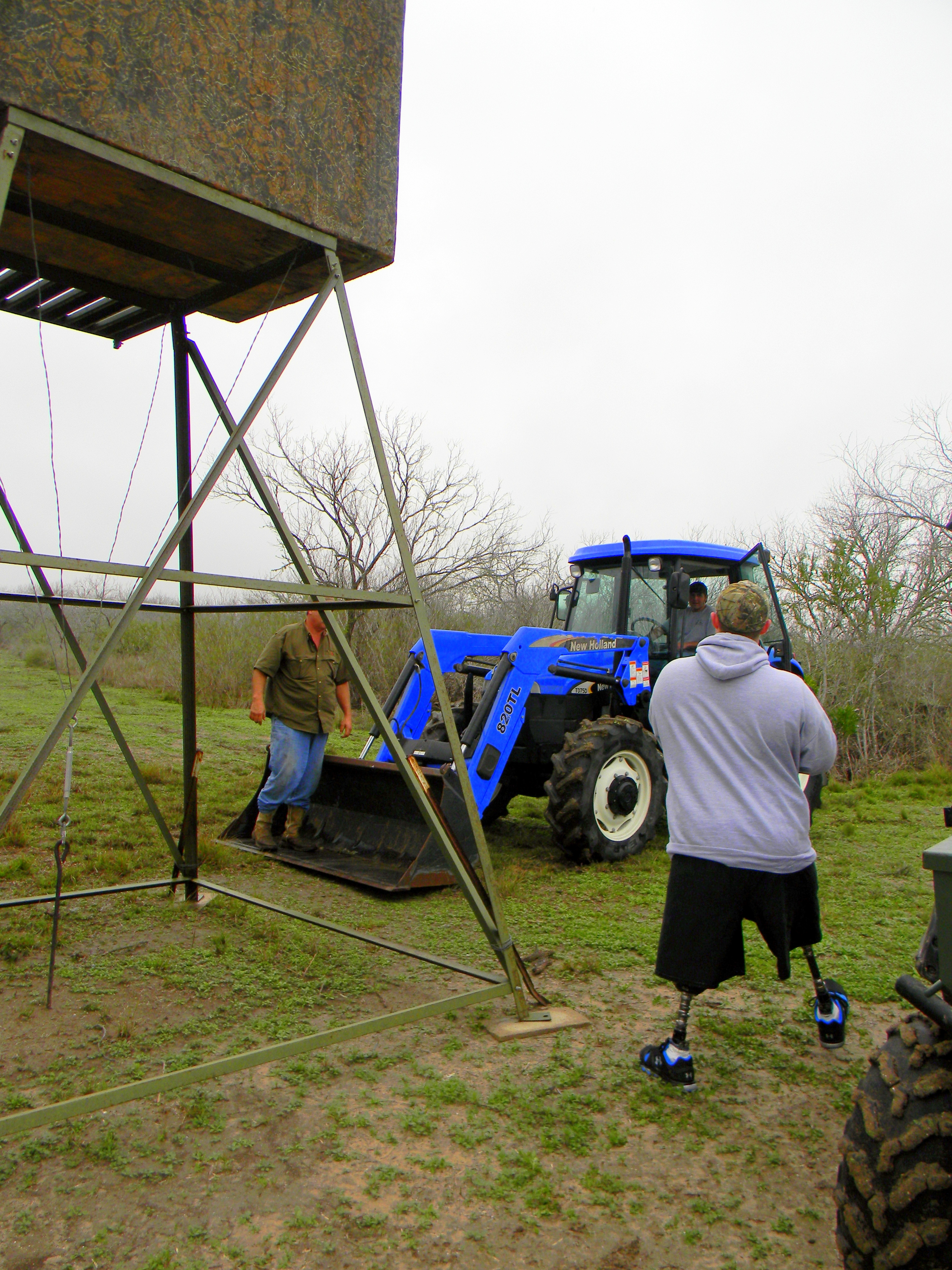 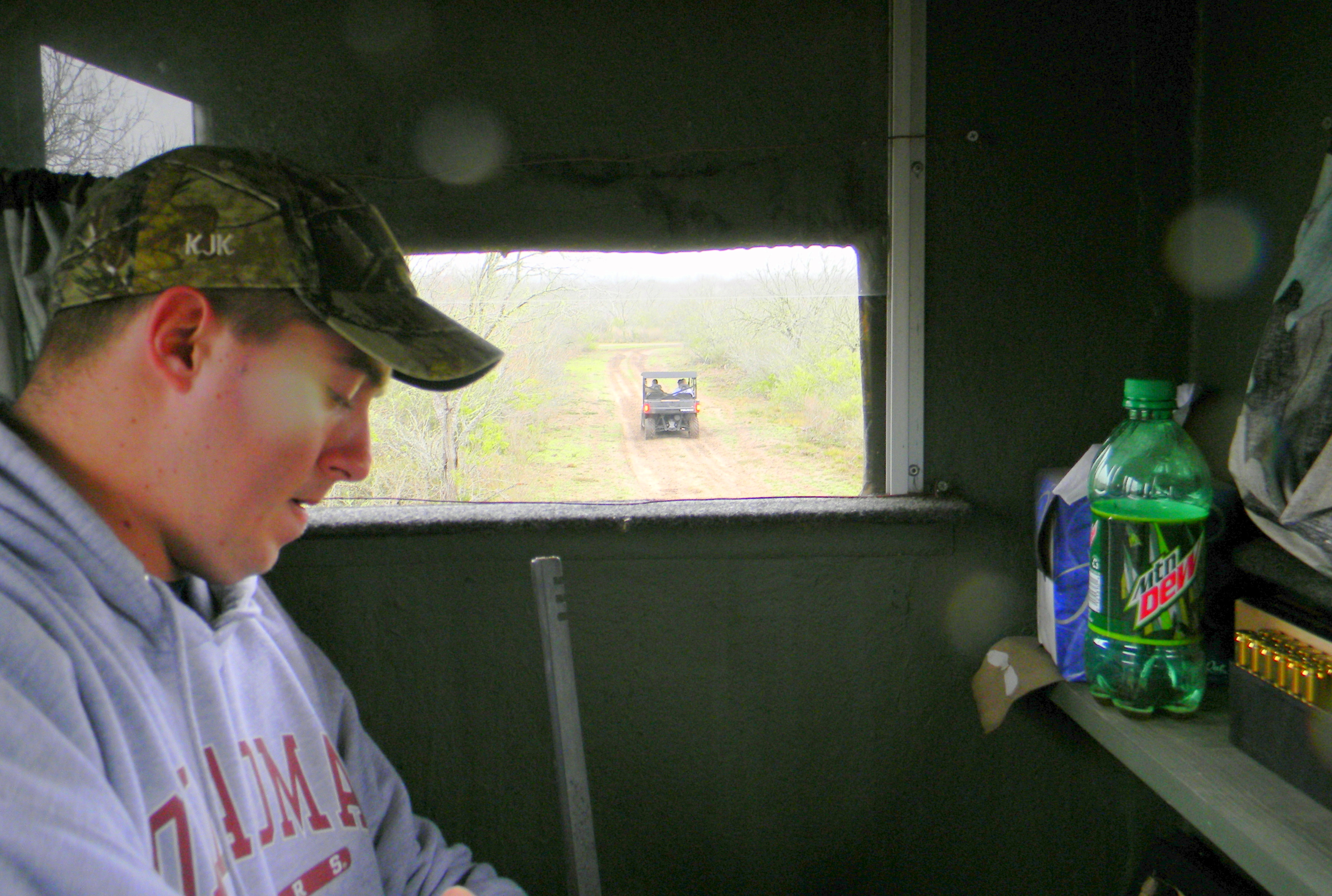 A change settled upon Cpl. Kalish each time he entered the blind.

He went from one persona to another. Subtly and suddenly. The way one changes from asleep to awake.

This warrior went from easy-going, humorous and focused on others – to silent, cool and piercingly alert.

A quietness came over his entirety; his body, his mind, his spirit became as silent and absorbing as a panther awaiting his launch.

Later it was clear he had heard and seen every movement of every creature above and below, to the left, to the right, to the front and to the rear. He also withheld reaction to those whose novice movements scared off a buck or two.

This change didn’t reverse itself until after he left the blind.

It is said that when a hunter looses the adrenalin rush that occurs immediately after a kill, he should stop hunting because the thrill is gone.

This doesn’t apply to Marines.

His movements were so steady and calm that he removed the safety in nearly the same moment as he pulled the trigger – he needed no time to relax and realign.

Each of the three kills he made were flawless. Through and through. In the lung. A couple leaps, then collapse. 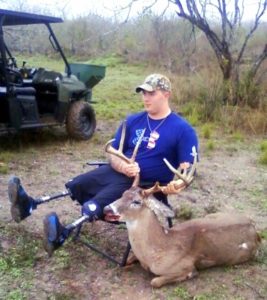 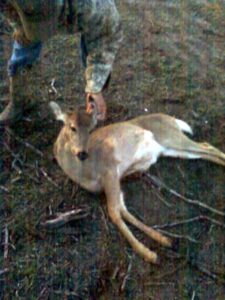 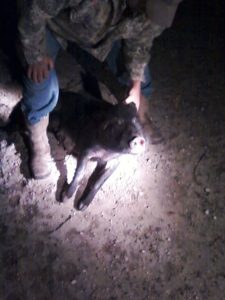 Bosworth, left, exhausted by the haul from the brush, may be one of hunting’s hardest working hands. Still, the others couldn’t resist teasing him.

The comradary created by hunting or fishing expeditions is unlike any other. CMO was organized, and has grown exponentially, to bring this type of healing forward.

Judging by Doc and Cpl. Kalish’s experience at GKR, theirs is a mission long, long overdue in the wounded military community. 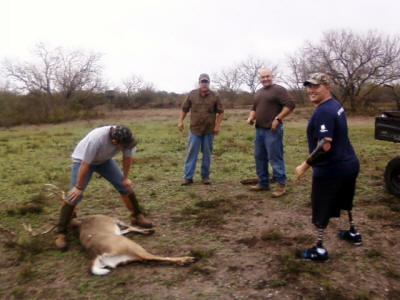 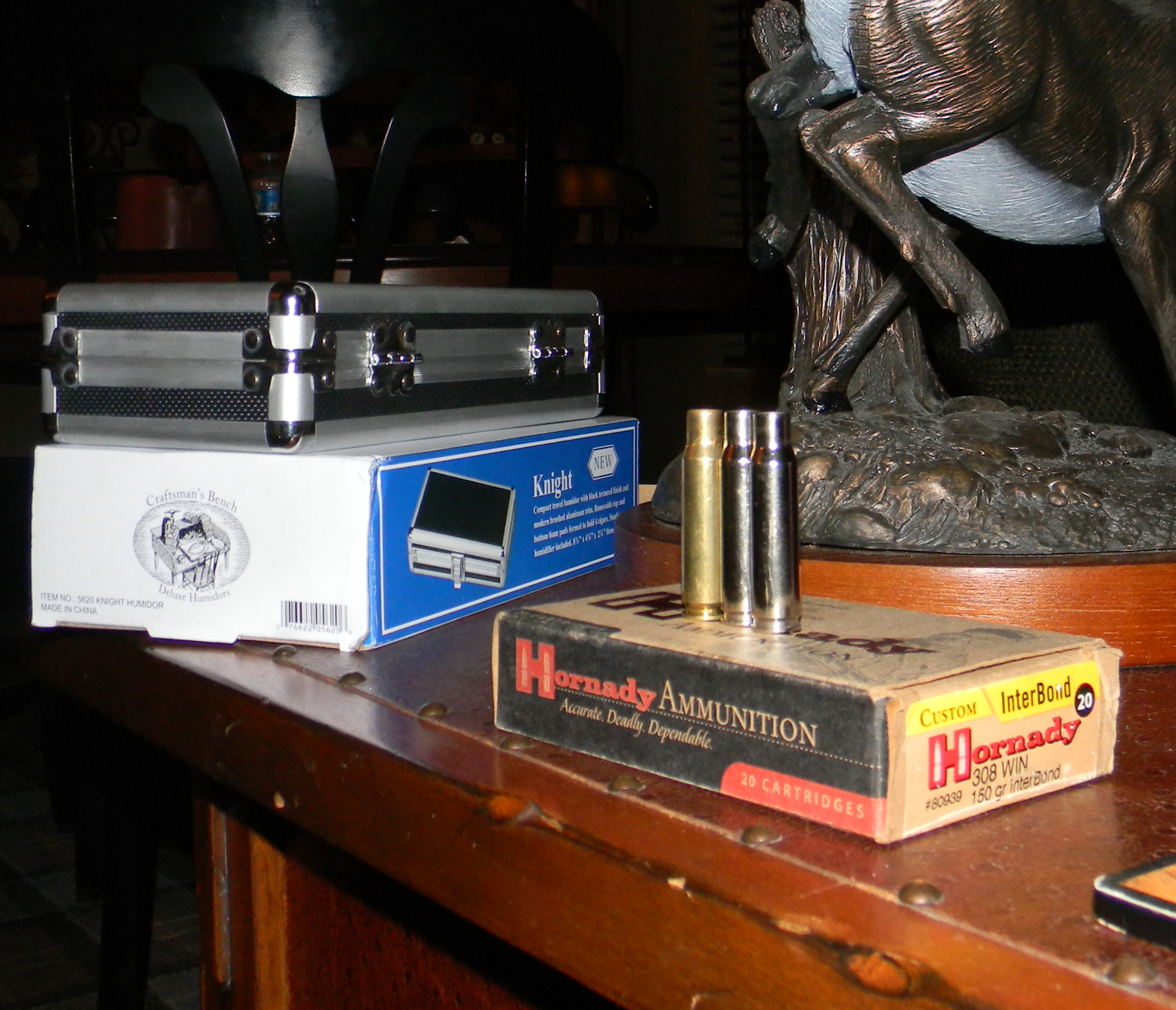 When Cpl. Kalish stepped on that IED, he was 28 days out from ending his deployment. By that time he had collected 15 cartridges. He had repressed fire he was receiving.  But those cartridges didn’t come home with his things.

These three cartridges and their accompanying mounts may have been the best reward of his CMO experience. Perhaps the portable humidor and expensive cigars he also received were a close second.