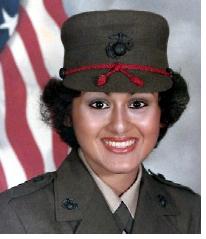 I’m proud to have reached the rank of Sergeant in the U.S.M.C. I joined in 1979 to see the world but instead saw four years of Camp Pendleton, California. Since that time, the Department of Veterans Affairs has looked out for my health and my education.       And I now am proud to serve my patients as I travel the country as a registered nurse. I owe much of my success as a nurse to the training and discipline I received first in boot camp in Paris Island, then as a legal services specialist while stationed Camp Pendleton.

That is why I am always interested in news developments about the military in general and about Marines in particular. In a stunning poll conducted by Bill O’Reilly, Fox News Analyst, regarding whether or not to prosecute the Marine Lance Corporal that shot an unarmed insurgent in Iraq, 98% voted AGAINST prosecuting the Marine.

Here at home, Republicans and Democrats, Christians and non Christians, men and women are banning together to stick up for front-line Marines protecting our way of life and helping to spread democracy throughout the world.

I have briefly lived in Mexico and recently vacationed in the British Isles. And as most Americans who have ever experienced life in other countries know, there is no greater country than the United States of America!

First, we enjoy the most modern conveniences of any country: Cell phones, faxes, personal computers, great automobiles and well maintained roads, and clean public restroom facilities that are free of charge. The list is almost infinite. What does it say about America that one of our most prominent societal problems is obesity? It says we enjoy an abundance of great food.

Many non-Americans, and unfortunately some Americans, view our culture as selfish, elitist, arrogant, and downright evil. I wondered, while sitting on the British bus as I toured the United Kingdom, why there appeared to be so much anti-American sentiment across the world? Why, for example, did I see graffiti in Ireland that said “F” Bush? Why did my British tour guide have such harsh words about our American private health system? Why do some American celebrities appear to have such disdain for the country that gave them the opportunity to reach a type of success that they most likely would have never enjoyed in any other country? Why does it appear that some of the mainstream media in our own country and abroad, refer to the U.S. as being the most self-serving, elitist, egocentric country in the world?

The reality for those people is that the United States is the most generous country in the world.       Our citizens’ tax dollars contribute more aid to third-world countries than all other nations in the world COMBINED! As a government, through private organizations, and even through corporate America, the people of our country are the first to deliver aid to countries in crisis.

The U.S.A is comprised of the most compassionate, freedom-loving, justice-seeking individuals on earth. Some fringe dwellers wrongly argue that it is our own fault that the twin towers were attacked; that Americans ignore the needs of many; that the U.S. should be tolerant and understand what the enemy is trying to tell us. I think the message from the enemy is very clear: stop loving freedom — or die.

So as I see it, in order to change the hearts and minds of those that question American motives on the war on terror, we must bring freedom and democracy to places that have never experienced it. I believe that once they get a taste of freedom, like us, they will become captivated by the enormous human potential of individuals bound by a common love and respect for self and others; a human potential that is stifled by evil people but that must be reclaimed as the God-given gift it is. This is not a war about oil or money or power as some would have us believe. It’s a war about good and evil. We are the good; and those who wish to kill us for being free are evil.

During my long-awaited overseas travels, I wondered to myself: what if we could channel all the positive energy I saw from every country I visited into one super-country? What if it would be possible to create a country that is composed of humans with one common goal? What if that common goal was freedom?

Five centuries ago Christopher Columbus discovered America. It had to have taken a great deal of guts and gonads to go against the flat-world thinking of that time to keep sailing into the horizon until either hitting land or falling off the end of the world. And since that time, America has represented an ideology of freedom, excitement, and glory to those who seek to make this their home. The pilgrims came here to escape religious tyranny. The founding fathers devised a brilliant government with checks and balances that to this day is superior to any in the world. Only the strongest and most persevering made it across the oceans from Europe, Africa, and Asia. South of the U.S. Border is Mexico, land of my ancestors. In the 50’s my father and others came across the Rio Grande to the U.S. to work hard, send money back home, and make this their new home for their offspring. Thus, I know there is a large sector of modern America that is composed of brown people that dared to take risks to make a better life for themselves and their offspring.

I’ve always been proud to be an American, but never more so than when I went overseas.       I was able to see America for a split moment from the outside looking in. At first I was uncomfortable hearing and seeing cheap shots taken at my country and at my president.       But then it dawned on me that perhaps these negative feelings are fueled by a lack of understanding about our culture. And often it’s the loud mouths that get the attention.       It’s become sort of a sport to insult Americans. But a need to insult tells more about the person doing the insulting than it does about the one being insulted.

Just like our country was founded by the most courageous of peoples from all over the world, the U.S.M.C. is comprised of the leanest meanest fighting machines of our time. It wasn’t for nothin’ that the tough German soldiers of World War I nicknamed the Marines “Devil Dogs.”

It took centuries for our country to become one nation under God with liberty and justice for all. And because of the type of people that settled into our country our U.S.A. has evolved on many levels – sometimes ahead of our time. But because of our success people from around the world will either wish us well and jump on our bandwagon; or stand by idly only to criticize; or worse – to try to harm us.

There is always room for improvement in any setting – in our personal lives, in our communities, in our nation’s policies, in world affairs.

But during this holiday season, as a Marine Vet myself, I wish to thank the United States Marine Corps for serving two important missions: protecting our way of life at home and bringing a taste of our freedom to countries that have suffered the cruelest of oppression for centuries!

Please know that the vast majority of Americans support our troops. Please come home safely knowing that by volunteering to serve you did the most honorable, selfless, heroic act to preserve our way of life for our children, our grandchildren, and to come to the rescue of parts of the world that I believe in time will come to fully appreciate your sacrifice.