More Than A News Story – A Journalism Project

Go to one of the nation’s best VA hospitals.

Get a severely wounded Marine.

Drive him far away from people.

Give him a big gun and plenty of ammo.

Then watch him heal.

Over the course of a long weekend at Gist-Kinsman Ranch (GKR) in George West, TX, HM1 Dwayne Friday (right) did what he was tasked to do: escort Marine Corporal Kenny Kalish on a hunt arranged by CMO and generously donated by the owners of this trophy deer hunting ranch.

The isolation from civilization and the mission to seek prey and harvest it, are an ancient ritual aiding survival.

Clearly it aids survival today as much as it ever has.

At the end of the weekend the traditional CMO ceremony culminated in the delivery of a K-bar and plaque. That particular knife being sharp enough to split a hair. A Marine wouldn’t deliver it any other way.

It is a symbol, perhaps. A symbol that a Marine is a deadly protector. No matter where life takes him.

Cpl. Kalish and Doc Friday are just such Spartan Warriors. 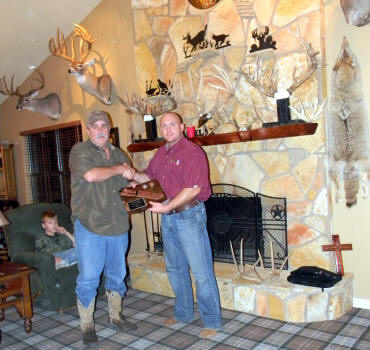 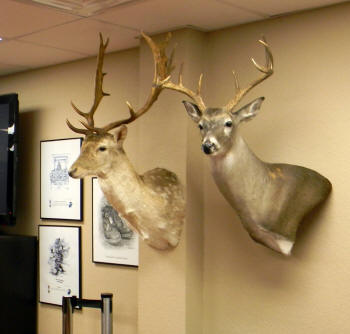 The Marine Annex at Brooke Army Medical Center (BAMC) in San Antonio is staffed by a unit of the Corps’s Wounded Warrior Regiment (WWR)  all of whom are wounded themselves.

Those not injured just are unable to assess, nor anticipate, nor address the needs of these Marines and Corpsmen.

The annex is the home away from home for CMO trophy mounts. Many Marines prefer to be reminded of their hunt than send the mount to their family, who are usually many miles, if not many states, away.

The regiment gives them a place to display these gorgeous creatures by finding wall space.

So many have been collected, that some mounts have not yet found their temporary homes.

Yet CMO is proudly represented by mount, by pictures and by logo. Marines new to annex make the connection between the wall art and the nonprofit (CMO is a 501(c)3 federally approved organization) – in a hurry. 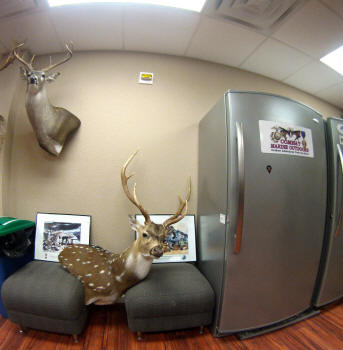 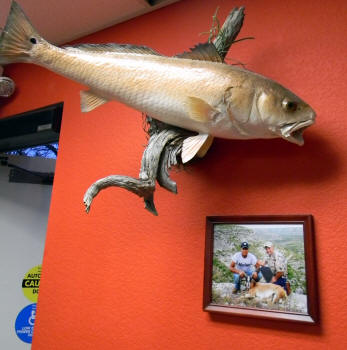 Trophy angling is just as rewarding as trophy hunting – and CMO has provided first-class off-shore and river fishing expeditions with the same gusto as the hunts.

As CMO has grown, the number of hunts and expeditions has increased exponentially, requiring splitting the staff of Marine generals, colonels, senior-level sergeants and civilians up to manage the onslaught of generosity Texas ranches have offered.

Cpl. Kalish couldn’t hide his psyched state-of-mind in the moments leading up to departing for GKR Ranch. Fellow wounded Marines floated around the annex lounge at the time, doing what off-duty Marines do. Playing video games on the high-tech gear, cutting up about whatever was coming in on their iPhones and general downtime chatter.

He tried to play it down, not wanting to rub his CMO hunt good fortune in their faces. Instead he batted his blue eyes, long eyelashes and dimples at the only female in the room, striking a smile to melt – smiles which seem to be handed out only at Marine Corps boot camp graduations.

His buddies know such exercises well and lauded him with silent support.

Cpl. Kalish was good to go. 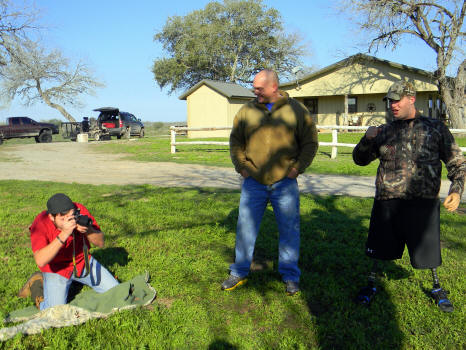 By the time for hunt portraits arrived, the vehicle was nearly packed and bonds formed were in high intensity, eking out those last moments of the kind of comradery which can only come for great times outdoors.

CMO was created to loosen up just that kind of boyish antic.  Because it heals Marines. It heals those who help Marines. It relieves them of stress and creates a muscle memory of humor.

Legs or not, pity the person Cpl. Kalish sees as even slightly crossing a child. Days of good relations could be slammed shut with a deafening silent treatment for a minor correction from anyone other than mom or dad.

The corporal sensed the emotions of Cody and Caden when few were even noticing them – all weekend long.

Picking up his prosthetic forearm/hand, he’d glance their way and push the button to make the hand rotate 360 degrees.

Caden (second from left) would slither to the floor dissolving in giggles. Older Cody (far right) better hid his emotions but his grin pushed his ears apart. 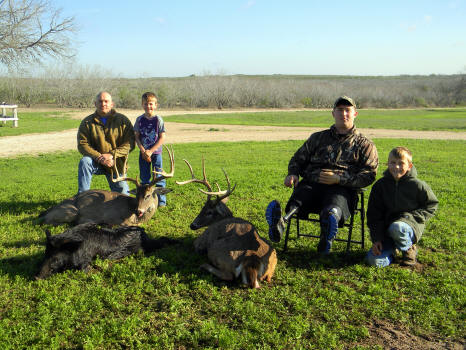 Editor’s Note:
Special thanks to Agostino Von Hassell for his sponsorship of this amazing project.
Special thanks to a retired Navy SEAL and SEAL Sniper school director for his generous weapons training in preparation for this project.