“There is so much freedom to do anything else.” Phil Irizarry said as he leaned forward in a quiet cantina not far from Marine Corps headquarters.

Then, with his eyes planted, Irizarry forced his point in a quiet and gentle voice. “And they go to the scariest places on the planet.”

That is what he admires in the veterans he assists via Operation First Response, a nonprofit that brings financial and other support to wounded warriors from all branches. Irizarry has been with OFR since 2007, and is currently on several boards, including as a director.

“There is so much entitlement.”

In what is now one of our nation’s longest wars, and easily the longest war with an all-volunteer military, a young person’s willingness to step away from a fast fun life is nothing but sacrifice. “Its my time at bat,” is how they explain their decision to Irizarry.

Twenty years into a career in law enforcement, this former Marine sniper lives at the top of a mountain on the east coast, with two beautiful children and a lovely wife. A request for pictures wasn’t even out of mouth before he was deep in his back pocket pulling them from his wallet.

With a hard-earned comfortable life, he should be relaxing. But that’s a dog that won’t hunt. He can’t not help OFR. “I talk about OFR all day. I’d talk about all night if I could,” he admits.

A year earlier this reporter met Irizarry while checking in at Soldiers Sailors Airmen & Marines Club in upper Manhattan. A tuxedo bag over his shoulder gave away his ticket to the best event in town that night, the New York City 2010 Mess Night, hosted by former Marine and celebrity chef Agostino Von Hassell at the New York Athletic Club.

In the cab ride over, Irizarry spoke about OFR’s filling the financial gaps that can make or break a loved one’s ability to support a critically wounded Marine, for instance. Before VA funds kick in, mortgage or rent payments continue, cell and heat bills pile up, and a young Marine’s fiancï¿½ has put her life on hold – for months at time – to live near the hospital where he comes to grips with a whole new and difficult future.

Describing our mission and our project publishing news specifically regarding trauma, this reporter watched Irizarry’s gaze fade. He slowly faced away and onto NYC traffic. His eyes followed up a tall building to the sky. Quiet.

Soon we were on the ninth floor and after having the pleasure to formally introduce Irizarry to Von Hassell, this reporter was dumped.

He wrapped his arm across Irizarry’s shoulder and marched him away. When the host of an event, that would easily raise money in seven figures over the following few hours, wanted Irizarry’s undivided attention, his mission must be good.

Dinner conversation that Mess Night promised an interview. A little more than a year later it happened. He’s a busy man.

So right out of the gate, trauma was the subject and Irizarry was pinned down. He didn’t cower. He didn’t quiet down. He dove right in.

“We should not expect that in a year or two everything will be fine,” he said of Marines who are well aware that their trauma illnesses don’t have a quick fix. They refuse to be put in a one-size-fits-all box, he said.

“And if we go into it with a similar perspective, we can affect a lot of support. It’s also important to have many different approaches,” to deal with PTSD and it’s related illnesses and symptoms.

It isn’t easy for anyone to talk to someone traumatized about being traumatized. Even if that person is offering essential help, as OFR staff like Irizarry does. It’s painful. It’s extremely painful. And for some, it’s simply too painful. Not everyone survives.

Who does survive? “The people who survive tend to have one characteristic. They are selfless.”

So maybe Irizarry offers another kind of essential help. Maybe he’s an example of selflessness.

No maybe about it.

Apart from our face time, Irizarry shared in writing:

“What has impacted me the most is seeing the valor with which not only the wounded cope with their injuries, but their continued devotion to their comrades who remain on the battlefield.  The wounded always ask me how can I help them get back to the battlefield as quickly as possible.  Or if they know that their injuries will prevent them from returning they ask me how I can help them find a job which will be of continued service to their brothers and sisters still fighting the enemy.

“I have been equally impressed and humbled by the courage and determination of the families, moms and dads, young wives and girlfriends, who stand by their beloved warriors who have suffered in some cases unimaginable trauma both mental and physical.

“Many of them have to quit their jobs and move to close proximity of a VA trauma or burn center where their loved ones are being cared for.  They end up taking in some cases service jobs or what ever they can find, so they can get an apartment and be close to the wounded Marine, Sailor or Soldier.

“The traumatic injuries we are seeing in some cases require the service member to be in recovery from one year to two in some cases even more.  This means that a young wife or mother in the case of a warrior who is not married, has to move from say Oregon to Washington D.C. because their loved one is at Bethesda or Walter Reed.  They have no friends or family on the East Coast .  It can be daunting.

“That’s where we come in.  Operation First Response fills the gap during this time when VA benefits are being processed.  This can in some cases take one year.  Add to that that a mother or fiancï¿½’ will have no benefits to assist them apart from what the serviceman is entitled to if they have a power of attorney to manage those funds.  OFR can and does help these people make ends meet, making rental payments even buying groceries.  We have paid for plane tickets and even cell phone bills which stack up when a family is displaced, and friends and family remain cross country.OFR also stays with the wounded through the whole process.

“Indeed we have veterans who then join our cause once they are better and help us raise funds and speak at our gatherings.” 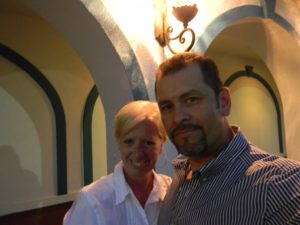 On a Wednesday evening at a Mexican restaurant south of Quantico, I sat in a booth with former Marine sniper and current law-enforcement officer Phil Irizarry.

Sitting there with him, (more)