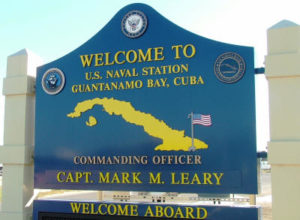 With headlines sourced from Washington to Hong Kong, what happens at the Naval Station at Guantanamo Bay must be very interesting:

Headlines such as these have filled Internet search engine databases. There as so many that 56 pages of Google searching only goes back three months. Interestingly, news is not what this editor found on a trip there in January.

So why write anything? That was my thought until a certain Marine Lieutenant Colonel or two suggested that I put the story to rest, by putting it online, so here we are, nine and a half weeks later.

The command staff of the Joint Task Force – Guantanamo Bay, the people who oversee the detainee camps and the press visits among other things, have a very organized arrangement for press visits. It appeared that the JTF staff sincerely want to receive the press. While the tasks of taking reporters to and fro throughout the base, eating, conversing, recreating with them – while remaining gracious and accommodating may seem unchallenging, it really can’t be very easy. Considering the many different angles and expectations that journalists from all over the globe arrive with, just getting the mission accomplished is a feat in itself.

For instance, Corps Stories mission was to determine the well-being of the Marines stationed on GTMO. The first misconception realized was that Marines, by and large, don’t handle detainees. There are a few Marines who do, and what they do is extremely important, as they deliver and inform detainees of the Administrative Review Board and its results. It is the work of thousands of Navy Master-of-Arms which insures the well-being of detainees on a daily basis.

Marines man the fence between the Naval base and the rest of the country of Cuba (remember GTMO is not on American soil, in any form). Good ground relations with the Cubans are no accident – and from the Base Commander to the Lance Corporal, every effort is made to avoid miscommunication and misunderstanding – on an hourly basis.

Also under the JTF Marines assist in giving press tours. They introduce visitors to places with historical significance, such as the North East gate, where once Marines and Cuban military personnel had quite lively non-combat interactions.

Marines also join the JTF in managing base logistics; making sure that the bases’ geographical isolation doesn’t interfere with getting food on the table, so to speak. Just receiving perishable items in a timely manner may be a bigger job than onlookers might realize. Were the massive salad bars at the several chow halls not so attractive, the press would surely note it.

Corps Stories happily reports that Marines there seem well-adjusted and as hard-working as ever.

Yet in wanting to speak to these Marines, from Colonels to Corporals, Corps Stories was operating way out of the planned press itinerary. At every turn, the PAO staff accommodated – noteworthy and also worthy of a letter to SouthCom’s Commander, which he received.

Possibly our readers have visited the National Parks of the Gettysburg or Bull Run battlefields. Once there, many, many visitors have a rather supernatural experience: they sense in subjective terms, the chilling events of thousands of lives lost, mournful wounding and tortuous battle. This is mentioned as precursor to very unexpected experience this journalist had at GTMO.

The Caribbean climate is completely disarming, especially to a mid-Atlantic resident visiting in January. But approaching the gate at Camp Delta, nearly 24 hours after a pleasant arrival, a shocking anger arose in me. Despite the balmy breezes, the professional conversations and activities, suddenly, I felt a presence not unlike I had felt visiting Gettysburg. That I was now just yards away from people who would and may kill my Marines in an instant. The presence of people who adore the destruction of September 11. The presence of people that our very young Constitution-defenders, must treat well despite the likelihood that they are cowardly, un-uniformed murderers.

As I rode in the press bus, I was very surprised at this emotion coming seemingly from nowhere. I used prayer quickly to restrain my thoughts and to grasp the reality of whom I was in the presence of.

The next day we went inside the Camp, visiting the Administrative Review Board building and staff. When leaving, as I wanted to interview another Marine, the PAO split us up, me going with 1stSgt. Sheila Tunney, and the rest with other PAO staff. Their bus delayed our exit through the sally port momentarily. As we sat there, an open-cover Jeep pulled up and stopped just feet in front of 1stSgt. Tunney’s truck. In it were three Sailors, two facing forward, one facing back. Aside the rear-facing Sailor was a detainee. He looked at me, and I at him for what seemed like entirely too long. I will never forget the look in his eyes. The arrogance of his countenance, the slight grin on his mouth, the ambition in his eyes, it was enraging. I knew I was safe, but I realized then one thing.

The three-hundred-odd detainees, screened out of nearly 74,000 first captured, are not our friends no matter how liberal a mind considers it.

Reporters will continue to visit and pace and wait patiently for their moment, their story of witnessing something they imagine occurs at GTMO.

Possibly the story of who really suffers at GTMO, those peacefully handing some of the most dangerous on this planet, is right in front of them.