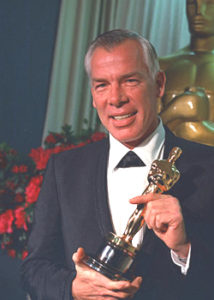 Lee Marvin was born on February 19, 1924, he served with the Marine Corps during World War II in the Pacific and was awarded a Purple Heart for a wound that he received there.

On his return, he became a movie actor and starred in a number of motion pictures until his death in Arizona on August 29, 1987.

He is buried in Section 7-A of Arlington National Cemetery, not far from the Memorial Amphitheater and the Tomb of the Unknowns.

We  can’t say for sure whether actor Lee Marvin ever related something like the story described to Johnny Carson on the Tonight Show (Marvin was a guest on the show seven times during Carson’s tenure as host), but the details of the anecdote are undeniably false.

Lee Marvin did enlist in the U.S. Marines, saw action as Private First Class in the Pacific during World War II, and was wounded (in the buttocks) by fire which severed his sciatic nerve. However, this injury occurred during the battle for Saipan in June 1944, not the battle for Iwo Jima, which took place several months later, in February 1945. (Marvin also did receive a Purple Heart, and he is indeed buried at Arlington National Cemetery.)