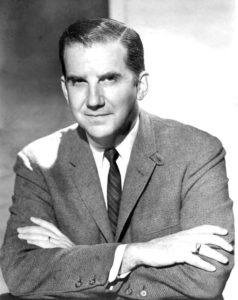 This hefty, hearty American TV personality had a booming voice and a resounding laugh that secured him a role as Johnny Carson’s announcer, on-air longtime companion and “human laugh track” on NBC’s long-running “The Tonight Show”.

Born in Detroit but raised by his grandparents in Lowell, Massachusetts, Ed McMahon began his career as a teenage carnival barker. After enrolling at Boston College, he made his professional on-air debut at Lowell radio station WLLH and perhaps would have become a noted personality in New England if not for the outbreak of World War II. Enlisting in the US Marines, McMahon earned his wings at the Pensacola Naval Base and later trained fighter pilots. After the war, he returned to school, this time as a speech and drama major at Catholic University. Following his 1949 graduation, he settled in Philadelphia and found work as a writer, producer and host of various local programs, including a cooking show and an early morning series. In 1950, McMahon made his national debut as a clown on CBS’ “The Big Top”. When the Korean Conflict erupted, he re-enlisted and flew some 85 combat missions, eventually achieving the rank of colonel.

McMahon landed his big break in 1958 when he as tapped to be the announcer/sidekick on the ABC audience participation show “Who Do You Trust?”, hosted by Johnny Carson. The pair enjoyed a nice screen chemistry and honed their routines (Carson teasing him about his weight or his propensity for drink) over the next three-plus years. When NBC was looking for someone to assume the reins of “The Tonight Show”, the network tapped Carson, who brought along his “right-hand man” McMahon. Over the next thirty years (1962-92), the pair enjoyed a long and fruitful teaming, with McMahon’s nightly trademark introduction “Heeeeere’s Johnny!” becoming an institution. The success of the partnership lay in McMahon’s understanding that he was there to be straight man for Carson’s quips. In the process, he also found fame. NBC frequently tapped him to host game shows (e.g., “Missing Links” 1963-64, “Snap Judgment” 1967) and specials (i.e., “Television’s Greatest Commercials” 1982-83). McMahon was also visible on American TV screens as the brisk and genial host of the syndicated variety program “Ed McMahon’s Star Search”, ushering in the parade of entertainment hopefuls as they strut their stuff before a panel of celebrity judges. Among the many notables to emerge from that series were Rosie O’Donnell, Drew Carey, Jenny Jones, Linda Eder, Sam Harris and Ray Romano. Additionally, he served as co-host (with Dick Clark) for “TV’s Bloopers and Practical Jokes” (1983-88) and “Super Bloopers and New Practical Jokes” (1988-92). In between tapings, McMahon kept busy doing TV commercials for products from Alpo Dog Food to Budweiser beer to American Family Publishers’ sweepstakes.

Besides his numerous TV appearances, McMahon has had a fitful career as a stage actor (on Broadway in “The Impossible Years”) and as a film actor. He debuted in the intense 1967 drama “The Incident”, about two teenagers who terrorize NYC subway passengers and subsequently appeared in “Slaughter’s Big Rip-Off” (1973), “Fun With Dick and Jane” (1976) and the camp classic “Butterfly” (1981). He appeared as himself in the Warren Beatty-Annette Bening remake “Love Affair” (1994).

Once Johnny Carson retired from “The Tonight Show” in 1992, McMahon generated some positive critical spin for his supporting role as a morning chat show host in the sitcom “The Tom Show” (The WB, 1997-98), starring Tom Arnold, and as a grandfather in the ABC/Disney movie “Safety Patrol” (1998). In 2000, he teamed with Victory Entertainment and Microsoft to launch the Internet talent competition “Ed McMahon’s Next Big Star” (www.nextbigstar.com). Viewers would log on, watch competitors in various categories (e.g., male vocalist, musical group) and vote for the winners, functioning as a 21st-century version of “Star Search”. By the fall of 2001, PAX TV committed to 26 original hours of “Ed McMahon’s Next Big Thing” and the host would travel on a cross-country tour auditioning potential candidates.