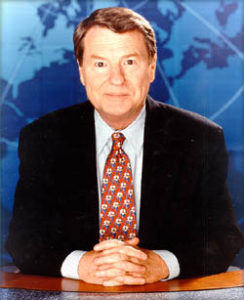 Jim Lehrer was born in Wichita, Kansas, in 1934. He is a graduate of Victoria College in Texas and the University of Missouri. After three years as an infantry officer in the Marine Corps, he worked for ten years in Dallas as a newspaperman and then as the host of a local experimental news program on public television.

He came to Washington with PBS in 1972, teaming with Robert MacNeil in 1973 to cover the Senate Watergate hearings. They began in 1975 what became The MacNeil/Lehrer Report, and, in 1983, The MacNeil/Lehrer NewsHour, the first 60-minute evening news program on television. When MacNeil retired in 1995, the program was renamed The NewsHour with Jim Lehrer.

Lehrer has been honored with numerous awards for journalism, including a presidential National Humanities Medal in 1999. In the last four presidential elections, he moderated nine of the nationally televised candidate debates.

“No Certain Rest” is Lehrer’s thirteenth novel; his fourteenth, “Flying Crows”, will be published in June 2004. He has also written two memoirs and three plays. He and his novelist wife Kate have three daughters and six grandchildren.