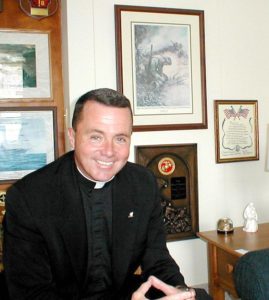 O nly the loss of Father Dennis Rocheford, and the seemingly shocking manner of his death could draw me out enough to write – an editorial in his honor.

Trauma survivors need the world to stop in order to heal. Then there are Marines who endure trauma – and volunteer for more – to comfort and assist others.

One of his many duties was the sacred confession. Listening to the admissions of Man and Marine has to be one of the most selfless acts performed in humanity. Hearing heartache and sin, one against another – without judgment – had to just pile the traumas of those upon his own. Not that he would have it any other way.

Maybe it takes one to know one. But I would guess at some point this amazing Marine knew that the trauma would get the better of him – and he was willing to let it win if he could bring many a Marine to God beforehand.

He rests happily with the Almighty without question. No one who has served Marines deserves it more.