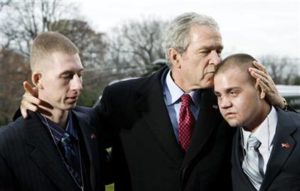 A s President George Bush leaves office in the next few days I cannot sit by, even with good reason, without giving him the praise and honor he deserves – in writing and archived.

Throughout his presidency Corps Stories has run a parallel course to his service of our country. He has led and touched and sought out and comforted and raised up and honored Marines. And their loved ones. And their supporters, so his focus on them has surfaced incalculable times for us.

He, in countless news stories and photos, has tried to let the press and public see what we readers and writers of news about Marines see: Marines are not normally ordinary. They are better than, more sacrificing than, more brave than, more willing than, the rest of us.

When he arrived in Baghdad on Thanksgiving 03, I found myself stomping my feet and swinging my fists in the air in unrestrained victory; take that you experts on his intent. Take that you who predicted his arrogance. Take that you who found him insensitive. Take that, you who know not how self-centered you are.

Stabbed in the back by former staffers, he dismissed their antics and honored Marines. Not just Marines, but this editor hones in on those, because so few ‘get’ their service. The Wall Street Journal, the LA Times, and a few other commercial reads have noted his focus.

We at CorpsStories though, a small alternative new source, are very grateful to you, Mr. President. Semper Fi, dear Sir.