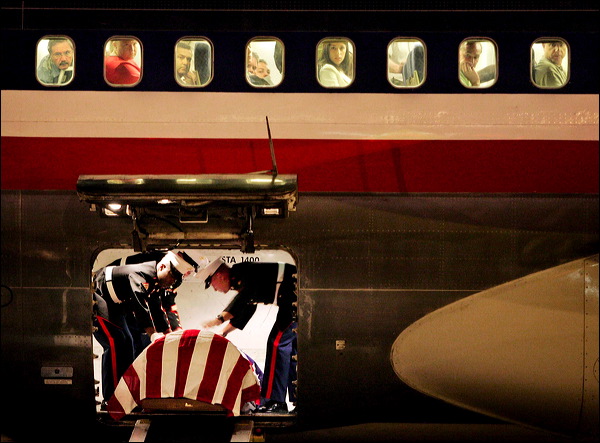 BEST IN SHOW: Todd Heisler, Rocky Mountain News. When 2nd Lt. James Cathey’s body arrived at the Reno Airport, Marines climbed into the cargo hold of the plane and draped the flag over his casket as passengers watched the family gather on the tarmac. Click here for the 2005 Atlanta Photojournalism Seminar Award for Heisler’s work with the Cathey funeral.
CorpsStories Winter 2006 Editorial

Rarely does a picture make me cry. But twice in less than as many months, I have sat in bed with my laptop on my legs, felt my chest involuntarily fill with air, and had uncontrollable sobs rip through me like thunder from the sky.

When I saw Heisler’s photo of 2ndLt Cathey’s pregnant, devoted wife camp next to his casket so that she could spend a last night with him.

When I saw Heisler’s photo of an eagle’s feather tucked between the folded hands of the corpse of Cpl. Brett Lundstrom.

I’ve seen hundreds, if not thousands of outstanding photos from America’s newspaper’s photo departments. Many, most in fact, are far better than they are ever given credit for.

But Heisler is unique: his photos each paint across a vast canvas. They are stories. They each could stand alone, and any viewer would be moved, would understand that he has used discretion, and excellent judgment, and yet revealed something intimate and extremely personal that most of us, God willing, will never experience in our lifetimes.

So when collected, when one reviews the Cathey gallery published in Time Magazine, or the Lundstrom gallery published by Heisler’s own Rocky Mountain News, the experience is riveting, and inspiring and life changing.

Life changing because we see why these fallen Marines are among the greatest Americans who ever lived. Because only Marines, and their devotion to each other and insistence that each be laid to rest with precision honor – only Marines truly know what that fallen Marine has given us. Heisler’s galleries bring ordinary Americans though closer to that understanding, by the glorious art he creates and the strength he captures.

I had the honor of speaking to him momentarily recently. I asked him for an interview. He was very gracious and said he’d call, but hasn’t, for which I completely understand. The whole world wants his attention and rightly so.

But I was able to tell him what was in my heart: that he had revealed to me that he had taken the time and courage to build a trusting relationship with the Marine Corps, one which gave him the access for the Cathey photos.

He is a very brave man, and clearly one with strong ethics and convictions. And through that, and that alone, he is revealing the Corps, like no other photojournalist in civilian media today.