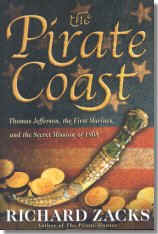 (Interview conducted via the Internet, June 2005)

Zacks: Hi Meriwether (and Jeffery): Thanks for the interest…

CorpsStories: First, your research regarding those apparently humble early Marines, was clearly quite exhaustive. Tell about those experiences of research.

Zacks: My approach to research is above all to try to find memoirs and letters from the people involved in the events. (I want to avoid generalizing historians, with big theories on this or that big trend.) So the goldmine for my research on the early Marines was a memoir written by a very unhappy Marine named William Ray. This unbelievably rare book is called “Horrors of Slavery, or The American Tars in Tripoli” (1808).  Ray was a 5′ 4-1/2″, 34 years old, when he enlisted. He was so down on his luck… he had closed his general store, had failed as a schoolteacher and had missed a chance to become a newspaper editor cause he fell ill traveling to the job. Ray got drunk and walked down to the river near Philadelphia to drown himself and there he saw a flag waving and an officer recruiting Marines. William Ray had to decide between suicide and the Marines. He found it a tough decision. Ultimately he enlisted and never was a man less suited to following orders.

His memoir paints a picture of the daily life of the Marines in 1803… receiving $6 a month pay and basically acting as a glorified guards to protect the captain from the rowdy crew. Ray hated his Navy captain, William Bainbridge who rarely hesitated to flog or chain a man. Bainbridge allowed the men four consecutive hours of sleep and when one of the Marines was caught sleeping on duty for a second time, Bainbridge ordered him chained in the coal locker. It’s those kind of details that make a book come alive.

The Marine band was started very early on… and the people of entertainment-starved Washington loved to hear it play. But Thomas Jefferson thought the music a bit crude and he personally imported an Italian band. At some government functions, after each patriotic toast a band would play a flourish of music. At some D.C. events, the Marine band played for one toast and then Jefferson’s Italian band played the next.

In 1800, the Marines were clearly the least respected of the three divisions of service, lowest paid and attracting riff raff, but that would change and part of the reason it changed were the events in my book… how William Eaton, a captain court-martialed out of the ARMY, a failed diplomat, led eight Marines on a secret mission to overthrow the ruler of Tripoli.

You asked about research. I was at the Corps Museum in D.C., the Library of Congress but my most enjoyable place to research was Woodford Reserve Bourbon distillery near Lexington, Kentucky. Lt. Presley O’Bannon, who planted the flag on the walls of the fort in Derne, later in his life helped his brother-in-law Elijah Pepper to make Old Pepper Kentucky bourbon. I felt it my responsibility to visit the plant, sample the wares. I learned that the smell of aging bourbon spreading into the air from the oak barrels is called “The Angel’s Share”. And I can vouch that that is one accurate _expression. It is a heavenly aroma. Where was I? The best research find was William Ray’s memoir and I also used background information in Allan Millet’s fine book, “Semper Fidelis: The History of the United States Marine Corps”.

CorpsStories: Secondly, throughout your book, we get to know many fine Marines, to lesser or greater degrees. What brought you to recognize the importance of this horrific and heroic series of events in our history, and to write so compassionately about those who sacrificed so without any significant recognition (prior to this work)?

Zacks: Everyone sings “From the Halls of Montezuma to the Shores of Tripoli” but few realize that it wasn’t some amphibious landing in the surf off Libya but rather this was a small covert op by a rogue agent who defied his president. As soon as I began to realize how exciting and dramatic the mission was… I wanted to follow up all the details. The flawed hero is clearly Jefferson’s secret agent, William Eaton but the largely unsung heroes are the EIGHT Marines who accompanied him on that near-miraculous mission. Let’s record their names: Lt. Presley N. O’Bannon, Sgt. Arthur Campbell, Privates: Bernard O’Brian, David Thomas (Wounded), James Owens, John Wilton (Killed in Action), Edward Steward (Died of Wounds). One name is still lost.

There were various attempts in Congress to reward the survivors with free land in Missouri and swords, etc. but those rewards were always attached to William Eaton and he fell deeply out of favor with Jefferson’s administration for criticizing the peace treaty and revealing that the president had withdrawn supplies, money and troops from the mission.

I wish I had more details about the individual eight Marines. O’Bannon is the only one we know much about. He was fun-loving, fiddle-playing, courageous sort of officer but he got so disgusted with lack of promotion in the Marines that after the war, he joined the Army, before going on to distill whiskey, make a fortune in real estate and eventually get elected to office in Kentucky.

CorpsStories: Finally, you are truly a writer’s writer. The pages flew by despite the great detail and extensive vocabulary you used. How were you able to keep such depth of history light yet deeply compelling?

Zacks: I’m glad you felt that way about the writing because I try very very hard to keep the story moving along. I hate most biographies that spend like 700 pages on Warren Harding’s wife, Florence.

My method is to make a single-spaced time line of every single event in the main characters’ lives. August 26, 1803, August 27, 1803, etc. and then to take that clarity of timing and structure the events into a dramatic telling. I do not change one fact or detail but I allow myself to choose when to reveal something and how to pace from one event to the next. Frankly, I also like the human details and I don’t shy away from sex or violence. They happened. I write them. It all adds flesh and blood to history.

Thanks again, for spotlighting “The Pirate Coast”… anyone interested will get a taste of the early Marines and also of America’s first covert op “to the shores of Tripoli.”

Editor’s Note: Special thanks to Jeffery Anderson of FSB Associates for his invaluable contribution to this story.