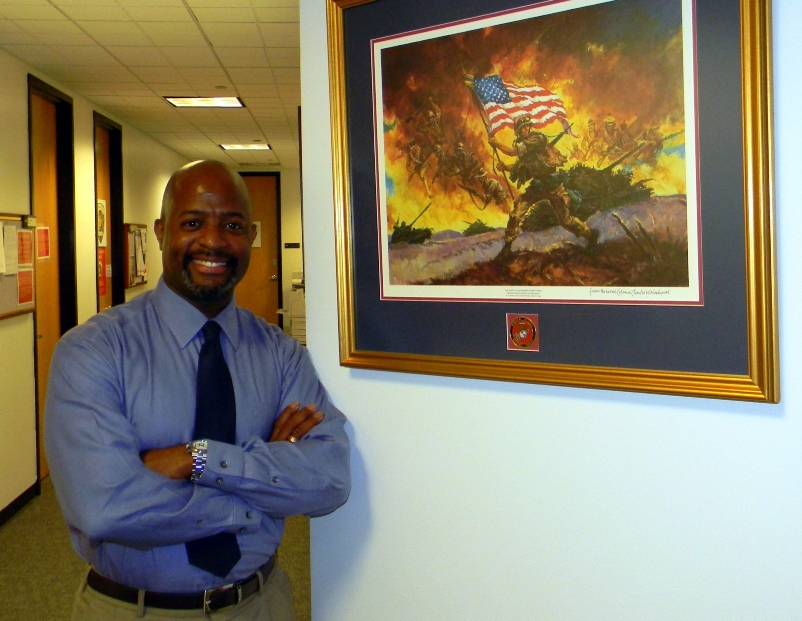 Holding the receiver against his cheek, Mike Brinkley leaned back in his ergonomic chair practically to laying. He pressed his other hand to his clenched lips and his eyes went from animated to concerned. He rocked gently and stared at the computer screen, then at the wall. He had a sick Marine on the line.

In his cramped cubicle in a tall building, Mr. Brinkley is a Department of Labor employee assigned to Wounded Warrior Regiment (WWR) Headquarters at Marine Corps Base Quantico. Renewed on a yearly basis, his assignment suits him. Having been raised in Norfolk, VA, and an Army veteran himself, he’s been surrounded by a military community his entire life. That coupled with his passion for customer service, he’s a trusted civilian; a rare item amongst Marines. On that, his third call of the morning, his focus was impenetrable.

Maybe for the first time in its history, the Corps has the support of the civilian side of federal agencies specifically in dealing with the demanding intricacies of troops working with combat trauma. The Labor Department’s Office of Disability Employment Policy has developed an extremely well-researched organization for those Warriors returning with PTSD and TBI: America’s Heroes at Work program (AHW). AHW addresses the employment challenges of returning Service Members living with Traumatic Brain Injury (TBI) and/or Post-Traumatic Stress Disorder (PTSD).

Those who are actually disabled are the small fraction who have been diagnosed with a trauma illness. This small fraction is upward of 20 percent of combat-exposed Marines. Then there are those Marines who would easily be diagnosed, were they willing to seek help. That could increase the group half again.

Trauma illnesses are now getting some of the respect they deserve for their ability to cripple not just individuals, but our military in general.

AHW’s site makes the subject of working with trauma so transparent one wonders how the subject was ever so blanketed. Employers for decades have been perplexed by returning veterans; who offer leadership skills and a work ethic they rarely find in civilians. Yet they have needs that often can’t even be discussed. That’s changing.

Planned uninterrupted work time? Done. Increased natural lighting? No problem. Avoid scheduling more difficult tasks for the end of the day when fatigue is a likely factor? Easy. Provide notebooks and calendars for easier information retrieval? Absolutely. Assign a mentor for when the employee has questions? Certainly.

These are a few of the dozens of workplace accommodations the program resolves; accommodations which would have been too much to ask – yet priceless to the disabled – before now. Not that every Marine with a trauma illness needs an accommodation, but should they – at any time for their entire working lives – it’s available through WWR and AHW.

On this particular call a young warrior is still processing out. Diagnosed with PTSD, Brinkley first spotted him at a job fair several weeks earlier, where he seemed a little out-of-place and uncomfortable. Still this Marine was anxious to work, a character trait Brinkley said he sees very often, even if they are clearly too sick to perform at the moment.

In this case, the Marine is just a few months out from his combat injury. He’s toying with the idea of working for a relative, who likely wants to ensure the Marine is out of harm’s way while still earning a paycheck. Still, he’s applied online to two military manufacturers who not only love having Marines work for them, they have a great relationship with Brinkley.

So with each of his thousands of clients and contacts, Brinkley feels out the well-being of each at that particular moment in time. When to hold their job-pursuing feet to the fire. When to take it easy on them while they find their way. Every call is a dance of judgment, discretion and instinct.

The whole process of receiving this help is a finely honed machine. First a call comes into a 24-hour call center set up by the Regiment. The Sergeant Merlin German Call Center, located in Dumfries, VA, receives calls for not only employment issues, but for benefits and entitlement, psychological health concerns, GI Bill, financial planning and counseling support on many issues.

But the beauty of the WWR program lies in its two-pronged system of support. First, Marines nationwide have signed on to knock on the door of any Marine needing to discuss occupational strategies or issues in person. Secondly, government employment experts nationwide are trained to help in every other way.

For Marines, taking care of each other is tantamount to their survival over the last 235 years, as best iconisized by the phrase, “Once a Marine, Always a Marine!” Marine For Life (M4L) is a mentoring and opportunity program designed by the Corps to connect any former Marine – with a currently serving local reservist Marine, called a ‘Hometown Link’. M4L’s attachment to WWR is a significant aspect of their service – and a huge resource for Brinkley. These Hometown Links will go right to the door of a Marine in need and help them like no one else can.

For the second part, once Marines are referred to Brinkley, he develops a relationship with them, and gets Regimental support from a non-medical case worker from one of the several Wounded Warrior Battalion detachments. Constant contact and assurance of administration problem resolution is their mission. They create a support stream including local veteran�s employment representatives(LVER’s) at state unemployment offices. Also at those locations Marines can get assigned a disabled veterans occupational specialist (DVOP’s).

And if all that doesn’t provide enough choice, then there is federal program for recovering Marines interested in employment with the federal government or within the intelligence community: the Operaton Warfighter program. They can participate in an internship for up to 3-months, and as little as 20 hours per week, working around their medical appointments. During which they may recieve an expedited top-secret security clearance in less than 60 days.

Finally, Brinkley is just as adept with employers as he is with Marines. In constant contact with military contractors and other civilian organizations looking to hire Marines, he knows this piece is very important. The more an employer appreciates Marine staff, the happier and more efficient the Marine will perform. That happy cycle is Brinkley’s goal.

Brinkley will talk to the Marine in call number three again the next week. And he’ll be thinking about him every day in between.