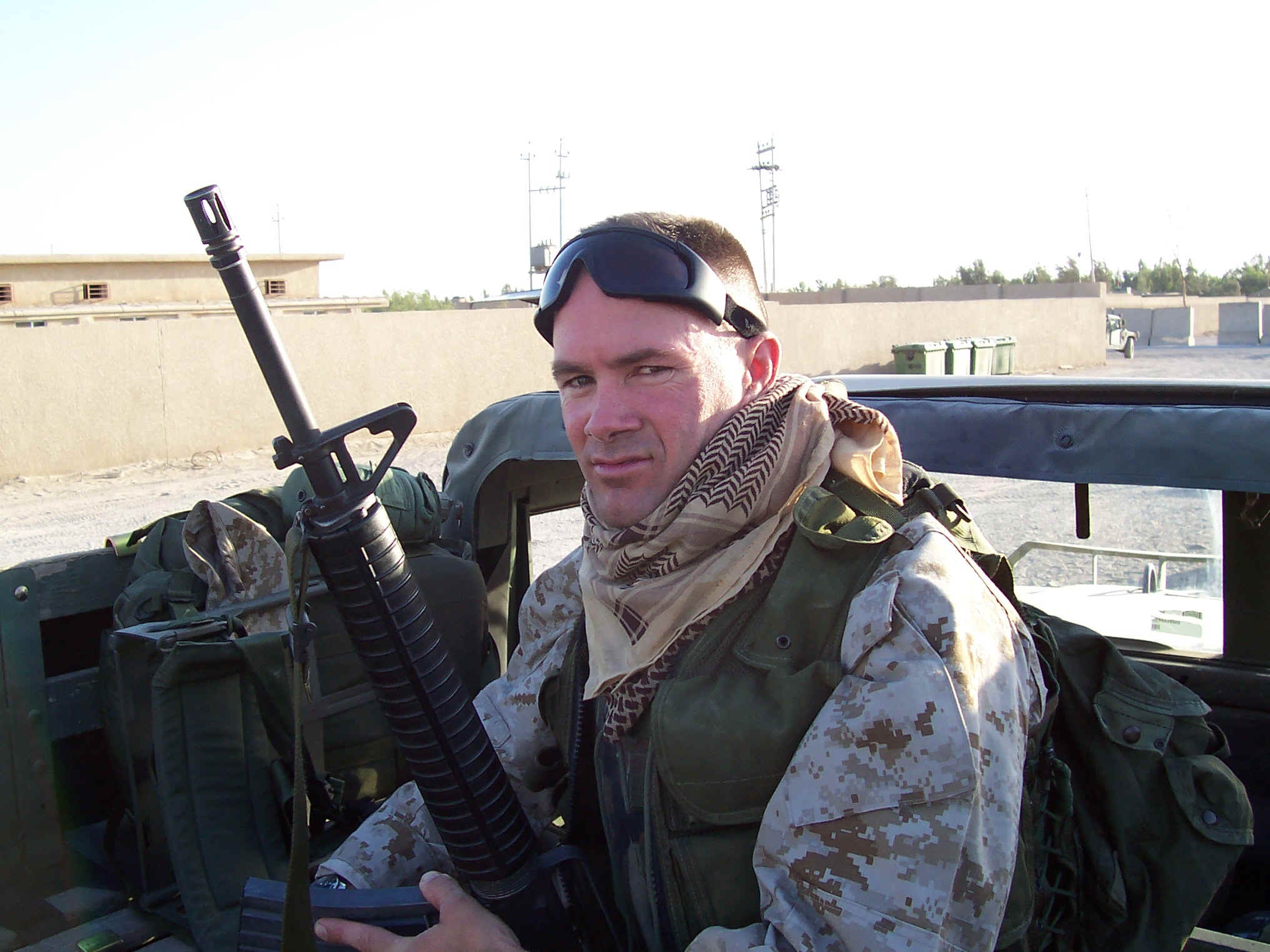 There was no way that young man on a dirt bike was my interview. I was there to talk to a senior Marine officer about the trials and tribulations of warfare.

It was a beautiful autumn day in Gettysburg. Just a few miles off a state highway, Dunk had directed me past centuries-old farms to”Bell Arrivo”.

Ok, so heaven and earth had moved: that was retired Marine officer and retired police chief Tom Moore on a four-wheeler slinging gravel and hurrying to hop off as if he’d been patiently awaiting my arrival.

Sorry, Tom, Gregg’s youth secures his quick turnaround. Before I had parked, properly greeted retired Marine Major Gene Duncan and collected my briefcase, Gregg was off the bike, to and from the house, and changed into interview-appropriate apparel.

Soon the two Marine authors, who spent the weekend with Gregg while on a speaking engagement trip from their Midwest homes, were off to see local sites, and Gregg was open to discussion.

“I was just a fly on the wall,” he said, meaning his humble objectivity was crucial to his report stateside: what was going right and going wrong in the real-life experience of urban warfare.

“The Marine Corps has reacted very quickly to make it so [the training] is much more like what actually happens,” he said.

One night on the main supply route from Fallujah to Ramadi, Gregg participated on a patrol. Soon after his patrol passed, an improvised explosive device detonated. The next day Marines returned to inspect the site only to experience the horror of two other detonations, this time causing the death of more Marines and the loss of a young Marine’s eyesight.

About that time in the interview, amongst family furnishings and a portrait of his grandfather, Gregg became somewhat emotional, and definitely animated. He stood up from the antique wing chair, and demonstrated an Iraqi father’s flippant reaction to a horrific event.

“Their reaction to their own children dying is, ‘it’s God’s will. It’s not my son, it’s just a daughter.'” The rage and outrage in Gregg’s eyes and gestures was heartbreaking. As a father of two young girls, it hit Gregg a little close to home.

Last year he had accepted orders to combat drug operations off the Florida Keys. Matters of the heart would pull himaway, but Gregg appears attracted to the high-conflict, action-packed, ‘hot’ dutystations.

On a chilly, rainy autumn day Gregg sat in the last booth of an old coffee shop in the tiny town of Quantico. The well-worn red naugahide had aged well and the mosaic tiled floors were patched with linoleum. Still, the mood was warm – even as Gregg hung on to summer drinking iced tea.

The difficulties of life in Washington D.C. during the 1960’s and 70’s took their toll on Gregg. On a downward spiral during high school, often in trouble, his family stepped in to right Gregg’s course.

It was then that he turned to boxing from street fighting, and to succeeding with education. As well as his victories in the ring, he’s since finished a Master’s program.

But Captain Emory Smith,Gregg’s mother’s father – would have a strong influence on Gregg’s values and determination.

He himself was one to endure. He started serving his country on the Cavalry. The 1930’s saw the Captain riding the border with Mexico upholding the law in the Texas National Guard Cavalry.

During the Second War he joined the US Navy, where he was gunner on a torpedo bomber.

It was after the war that Captain Smith had further noteworthy career achievements: he assisted Gen. Douglas MacArthur’s staff in prosecuting Japanese war criminals, including the Prime Minister,with 43 convictions and hangings.

The Captain retired, then put his efforts into his farm in Pennsylvania.

But Gregg recalls how heal ways made time for him and his brother, just one year apart, Eric. Eric joined the Corps with Gregg, and served six years before starting a career in the financial business sector. Eric and Gregg are very close, as they have always been.

Gregg quietly reflects on the Captain’s last days. Last year, when he became aware his grandfather was dying, Gregg opted out of the Key West post, and brought his family back to Quantico. He thought his grandfather had about a year, instead, it was a few days. Gregg was just in time to say good-bye.

Fate had a similar plan when Gregg lost his grandmother. He was stationed at Okinawa, Japan when she was near death. When notified, he traveled 24 hours to her bedside. She died moments later.

“I couldn’t believe he stuck up for me when he didn’t even know me,” Gregg said that fall morning, referring to his first, and serendipitous, contact with Maj. Gene Duncan.

Who is now one of his closest friends and advisors, Duncan read an officer candidate the riot act when he wrote to Duncan complaining that his platoon commander was too hard on him. “He’s there to judge your character, you’re not there to judge his,” Duncan had replied.

A couple years later,Duncan recalled that story during a speaking engagement where Gregg was an audience member. Although the two had not yet met, after the meeting Gregg overheard Duncan report who the candidate was. Gregg then realized that he himself was the offending party. He then happily plead guilty as antagonist; and he and Duncan have been close for the more than dozen years since.

Dunk’s somewhat deteriorating health caused Gregg to offer him a respite at Bell Arrivo. “He told me I could live there the rest of my life,” Duncan said, terribly humbled, “but of course I wouldn’t take him up on it.”

Captain Tom Moore’s observation of Gregg over the years closely resembles that of Dunk’s: “He is really a nice guy.” Tom recalls seeing Gregg at a speaking engagement in Florida, soon after Gregg had crushed three vertebrae in a parachuting accident. “Those senior NCO’s thought he was incredible,” Tom said, referring to Gregg’s recovery from being paralyzed at the time of the accident.

Meanwhile Gregg is astonished at Dunk’s powerful influence over young Marines, even today. He reports that they’re inspired after one of Duncan and Captain Moore’s speeches. “They’re so amazing, aren’t they?” he smiles.

The Cause for War

I recently wrote Gregg that yet another delay in the first draft of this story was due to posting another nine fallen Marine’s hometown news stories. I confided that sometimes I have no ability to retain the tears. His heartfelt response was print-worthy:

I can’t tell you how sad it is to go to these funerals for these young guys.

I went to one in Tampa where the guy was valedictorian of his senior class had a full scholarship to FSU but after 9/11 joined the Marine Corps and dumped the full scholarship. (LCpl.Andrew J. Aviles In Memoriam page)

He came back from boot camp and got orders to go to Iraq 4 days later. His best friend went with him. Before they left they went to each other’s houses and each guy promised their friend’s mother they would look out for each other and make sure nothing would happen to their friend.

In Iraq they were in a convoy of amtracks under attack, the one friend watched a mortar land right on his buddy and kill him. The kid who lived escorted the body home from Iraq.

His Dad was a former Marine and gave an incredible speech at the funeral. He talked about how close his son and Aviles were and about how much fun they had in those 4 days before they left. He said they put a lifetime of fun into those 4 days because that was his lifetime.

Then the kid’s JROTC instructor came up to the podium. He was an impressive prior Marine, Sgt. Maj. with 30 yrs in the Corps and then retired and came to the high school as a NJROTC instructor. The Sgt. Maj. talked this kid into being a Marine when the kid was in 10th grade. This Sgt. Maj. was his idol. you cannot imagine how this Sgt. Maj. felt speaking at the funeral with those poor heart broken parents staring him in the eyes when he was the man responsible for compelling this kid to become a Marine. He rose to the tough occasion and gave an incredible testimony and ended it by saying ” LCpl. Aviles is not gone, he merely got Permanent Change of Duty orders, he is now assigned as a Marine Guard at the gates of heaven” The way he said it with his drill instructor voice and tone was so inspirational there was not a dry eye in the place.

Then his older sister came up. She talked about her relationship with her little brother and how much she loved to talk to him when she came home every night and share what had happened that day and how they used to trust each other with their innermost thoughts and now how she would miss that so much. I don’t know how she kept her composure, as she spoke the father was sobbing with his head in his hands in the front row of the church.

I will forever remember that site and how bad I felt for that poor father at the most terrible time of his entire life.

All I thought then was we have to kill every one of these guys,every one.

Every Marine in Tampa showed up for that funeral including many retired Marines and the Marine Corps league.At the end each of us walked up to the casket and saluted.

It was a great tribute but also a reminder of how special each Marine is and how much impact it causes when a life is gone. To see all his high school classmates crying was also terrible.

Imagine how many times this same scenario has occurred since Sept 11. I just hope we stay in this fight until we destroy all the threat, otherwise these lives are lost for nothing.

Don’t feel bad for sobbing, some things are worth sobbing for.I just wish other people understood how important this is and how we need to finish what we started or this killing will be right here in the USA.

(Editor’s note: Special thanks to Capt. Tom Moore and Maj. Gene Duncan for their invaluable contribution to this story.)