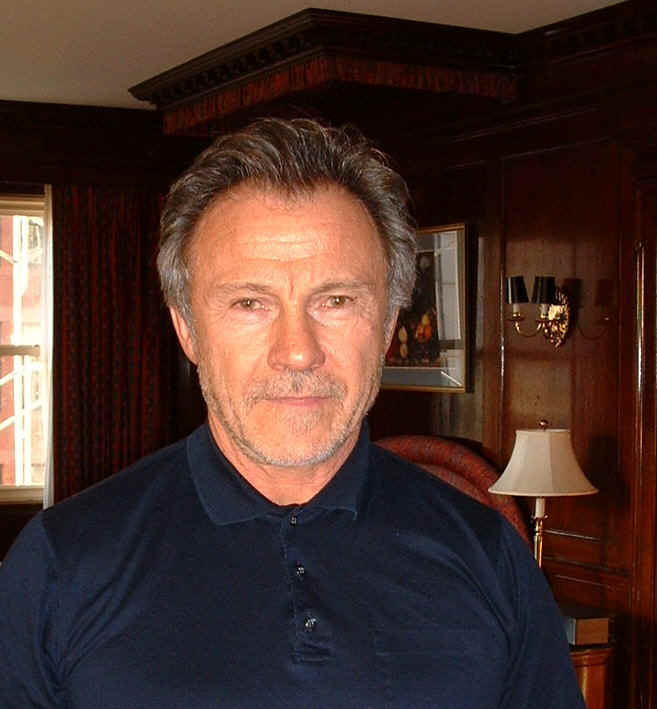 BOSTON – The voice on the line is calm, quiet, and that of SSgt. Kitsakos. “Want a mission?” Somehow not to be resisted. Deliver famous actor and former Marine Harvey Keitel a Marine Corps or flag lapel pin and get an interview. Now. At his hotel in Boston. On a Friday. During rush hour. Thirty miles away. Mission accepted.

Enter Lt. Col. John Monahan. Rendezvous for the pins: no problem. Problem. The uniform shop has everything but. Buy everything they have. Thanks, Colonel, for the military ID – and the time.

Chaos in Boston, as usual. Valet is very accommodating, so is the desk clerk. “Go on up. Room 423. He’s been waiting for you.” At the entrance to a private hall of three suites waits twenty-something Megan. She’s waiting for his drinks – and running interference.

Immediately Mr. Keitel pads out of the furthest door, comfortably barefoot on the luxury carpet. Under a brass chandelier he’s smiling. “Meriwether? CorpsStories? Welcome, I’ll be just a few more minutes. Go to the bar. Or hang out with Megan. Great to see you.” A typical Marine grip handshake and he’s gone.

Megan is keeping him on time for the pre-premier party. In forty-five minutes he and movie director Tim Blake Nelson will be on the second floor meeting the press, an hour before The Grey Zone premieres at the Boston Film Festival. Megan makes a call – only 80 seats left. Keitel rarely gives interviews, but someone did something right because the Metro West Daily News is wrapping up. Megan politely interrupts. One reporter out, one in.

They’re all waiting and smiling. Feels like meeting with four-star General Pete Pace.

Nelson is very relaxed and happy. He’s in his thirties. Nelson and Keitel are both Jewish. “I thing it’s important we do this,” Keitel says to Nelson, possibly referring to working on the first night of Rosh Hashanah.

Whatever crime against God is surely forgiven by the work. The movie is a very unique one – and the source of the phrase: truth is stranger than fiction. It tells the story of the only armed uprising at Auschwitz. To extend their lives a few months, Jews worked the incinerators, killing their own. One young girl miraculously survives the gassing and the workers seek to see her survive.

Keitel is smiling, anxious, “did you bring me something?!” Fishing the little gray bag out of the briefcase. Keitel sits close on a loveseat, like an old friend. He sorts out the items on the coffee table. No Marine Corps lapel pin. Flag pin, flag and POW flag pin, uniform insignia, and cufflinks, stickers. He’s disappointed. And trying to hide it. “I’ll take these things back with me. It’s OK. It’s OK.”

Keitel confides he’d like to see all serving and former Marines wear the pin when not in uniform.

He puts them in his bag and returns to sitting inches away. He’s so warm. And his eyes are so gentle – and very focused. “Ask me that question about the Marine Corps.” Keitel served from 1956-59, and won a medal for his service as a fire team leader in Lebanon in 1958.

“I learned one of my life lessons in the Marine Corps. I was on a night combat course. You couldn’t see your hand in front of your face. I was scared. The instructor was standing on a platform and said, ‘we’re all afraid of the dark, but I’m going to teach you to live in the nighttime.

“Anytime I felt anything difficult, I felt darkness – and I could survive in it. For me the Marine Corps was a spiritual journey. It’s not about war. It only because the spirit has been so deeply manifested that Marines have been so successful.

“Our duty is to protect those who do not have the means to protect themselves and that we were there is the sum of doing what is right.”

Keitel implies that he’d like more time, but he knows he’s prioritized his thoughts and comments.

Time to get to the party. Megan graciously insists on providing a seat at the premiere. Pictures taken and briefcase packed; last reporter out.

A call from behind and another warm Keitel smile. “Meriwether, Semper Fi. And tell the Colonel, ‘thank you’.”

Editors Note: Special thanks to SSgt. Alex Kitsakos (NYPD) and Lt. Col. Monahan for their invaluable contributions to this story.