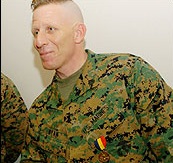 DEVENS, MA – Staff Sergeant Tom Ryan is looking down the barrel of retirement – and his independence and intensity promise a challenging future. This via skills and strategies he earned with pleasure, courtesy; his Corps.

SSgt. Ryan was raised in Boston, Massachusetts and joined the military, but not the Marine Corps. In 1980 he began a six-year contract with the Army. After three years of active duty, SSgt. Ryan decided he’d join the Corps when his 3 years of reserve duty were completed. At the time he was living in Colorado Springs, Colorado.

And sacrifice he did. He was a tanker in the Army and an E-5. He could have received another tanker occupational specialty in the Corps, but he’d have to wait another six months to enlist. “I accepted infantry as my MOS, I don’t regret it, I love it,” SSgt Ryan explains.

Instead he headed to Marine Corps Recruit Depot, San Diego, California, enlisting as a Private. “It’s just that Marines were more disciplined,” he says. Regarding the humility of having to face drill instructors, “I knew I had to go through it again if I really wanted to be a Marine. I just dealt with it.”

His first duty station was at Camp Pendleton, California. There started a series of posts involving security and policing, a natural occupation for the Staff Sergeant. In Concord, California he performed Barracks Duty i.e. security for vulnerable assets, with the Security Force Battalion.

For six months after the war, the Staff Sergeant was attached to the Security Battalion, managing Marines brought back to Quantico after going UA (unauthorized absence). As a Troop Handler of the Casual Platoon, he fed, clothed and escorted Marines staying at the barracks and processing through legal matters.

Two particular detainees included a Vietnam-era Marine whom went UA while the whole time owning a huge business in Florida. The other was an unfortunate citizen whose identity had been stolen by someone who then joined the Corps and then went UA, “I thought, ‘why doesn’t he know how to put his uniform on right’.” SSgt. Ryan reports that the mistake was quickly identified and corrected.

From 1991 to 1993, SSgt. Ryan was an enlisted aid and driver for the then Assistant Commandant of the Marine Corps. From his Washington, D. C. post, he traveled everywhere with the four-star General and was on-call 24 hours a day. General Boomer had been the Commander of Marine forces during the Gulf War.

But getting there was a surprise for the Staff Sergeant. The Colonel of the Security Battalion had recommended him, after which he went through a two-week selection and interview process. The surprise was in the SSgt. Ryan’s slightly tarnished past. He received a Non-Judicial Punishment for a lapse in good sense by returning to base a few hours late while stationed in Concord. But overcoming his past is part of his success, “I never let that NJP slow me down.”

“I got to meet all kinds of people. You get to see things from [the General’s] side. They make a lot of money but they deserve it, they work hard,” the Staff Sergeant explains. He reports that while the Assistant Commandant had a lot of support in his home and office, his schedule was extremely demanding. SSgt. Ryan reports that the General would have to change clothes several times a day to accommodate the various types of events that his extraordinary schedule required. “Everyone wanted to speak to him,” the Staff Sergeant recalls.

Part of SSgt. Ryan’s responsibilities were to make sure the General had everything he needed for his next engagement. And the larger part was to drive the Assistant Commandant everywhere. The hardest part of his job, he recalls, was having to be nice all the time. “You have a lot on your mind. You have to have three different routes to get everywhere. And you have security issues on your mind. You were constantly thinking.”

The following four years SSgt. Ryan was assigned to the 3rd Surveillance, Reconnaissance and Intelligence Group, specifically he was part of the Sensor Control and Management Platoon. With this outfit he traveled from Okinawa, Japan to Arizona and Texas repeatedly assisting in alien and drug interdiction.

The years from 1997 to 2000 were the most challenging, demanding and exciting times in the Marine career of SSgt. Ryan. From his station in Naples, Italy he and his platoon of 50 Marines awaited instruction.

As part of the 2nd Fleet Anti-Terrorism Security Team, his unit covered the embassies and Naval installations in Europe and eastern Africa, they augmented security. They trained all over the world and with allied militaries. “As a unit we were very independent.”

“It was the best job I’ve had in the Marine Corps. My Marines were well trained and disciplined. We traveled all over the world and trained with the best, from the Northern Ireland Training Center in England to shooting houses (in training) in Israel.”

His leadership training and personal independence were to be tested. When Al Quaida bombed the American Embassy in Tanzania, killing 12 people, it was SSgt. Ryan’s team who responded. They had 48 hours to arrive, secure the scene, secure the Ambassador and set up an interim embassy. “The challenge is great,” he recalls.

The 50-man platoon arrive on a C130, which landed on the closest thing to an airstrip, in that case a dirt road. The plane is loaded with pallets of security equipment including razor wire and communications gear. It was up to the Staff Sergeant to track down logistical needs, contracting food & water, for instance.

In Tanzania, all of the buildings on the block were destroyed. An American-owned building five miles away was converted to the temporary embassy. So the Staff Sergeant’s team secured the two sites and assisted the hundreds of FBI and CIA agents in their taking over the security. His team was on site for 36 days, the first four of which were so intense the Staff Sergeant had no opportunity to sleep.

Government contractors delivered 55-gallon drums, sand and railroad ties – the components of an initial perimeter. “We (his Marines and locals) filled 15, 000 sand bags,” he reports. “We hotwired the blown up vehicles from the embassy lot for transportation. It wasn’t a pretty ride but it was a ride”

“You take a soft target and make it a hard target,” says SSgt. Ryan. “I used to tell the Marines, it’s like Custard’s last stand…you can either set it up well, or else. There is no back-up plan, nobody’s coming to save us.”

After he left FAST, SSgt. Ryan strategically acquired an Inspector Instructor assignment, which are active duty Marines who train reservists. This was due to motivation of the heart – an adorable blue-eyed blonde, Karlie Ryan. His daughter was born in 1999 and lives in Boston. He was offered an I&I post in Alabama, but considered leaving the Corps if he couldn’t get the I&I battalion in Massachusetts. He got the assignment and now spends his spare time entertaining the love of his life.

He still approaches his assignments with great intensity, reports I&I Sergeant Major, Kip Carpenter. “Staff Sergeant Ryan believes in the Marine Corps and he believes in taking care of his Marines and doing his best in getting any task done that he’s assigned to.

“He’s the type of Marine you can depend upon. You can give him a set of instructions and you don’t have to check on it. Weather he’s familiar with a task or not, he does the research necessary to get it done, anything you give him – he can make it happen.

During last Christmas’s Toys For Tots campaign, SSgt. Ryan again got little sleep. “Of all the times I’ve helped people I’ve been somewhere else. It’s nice to do it in your own backyard,” he says of his efforts.

Eighteen months from now the Staff Sergeant is up for retirement. That could come sooner should he use extensive leave he’s earned.

And his years serving his country couldn’t be more appreciated. “I’ve definitely been rewarded for my efforts. I can’t say the Corps hasn’t recognized me, I’m not in it for the awards but it’s nice to be recognized.” SSgt. Ryan concludes, “After all this time in the Marine Corps it pretty much sets you up for any challenge you’ll meet in the future.”