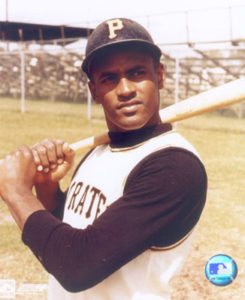 Editor’s Note: Mr. Clemente’s service can be verified by the National Museum of the United States Marine Corps, where he was inducted into their Hall of Fame in 2003.

Born in Barrio San Anton in Carolina, Puerto Rico, on August 18, 1934, Roberto Clemente was the youngest of four children. Early on he excelled in track and field, winning medals in the javelin throw and short distance races. However, Roberto’s real love was baseball.

In 1954, the Pittsburgh Pirates drafted him away from the Dodgers. Clemente joined the Pirates in 1955, where he played his entire 18-year Major League Baseball career. Roberto played in two World Series, batting .310 in 1960 and .414 in 1971. He was the National League Batting Champion four times, was awarded 12 Gold Gloves, selected National League MVP in 1966 and was chosen as the MVP in the 1971 World Series.

On September 30, 1972, Roberto Clemente hit a double to earn his 3,000th Major League hit, placing him in an elite group of baseball greats. No one knew it at the time, but that two-bagger would represent the last regular season hit for Roberto Clemente. That New Year’s Eve, Roberto and four others boarded a plane to deliver relief supplies to earthquake-striken Nicaragua. Shortly after takeoff the plane exploded and crashed in the Atlantic Ocean. There were no survivors.

Clemente’s death shocked the world. The Baseball Writers Association of America held a special election and the mandatory five year waiting period for the Hall of Fame was waived. On August 6, 1973, Clemente, who had a lifetime .317 average with 240 homers and 1,305 RBI, was posthumously inducted into the Cooperstown Hall of Fame. He became the first Hispanic player ever elected to the shrine.

It has been just over 28 years since his untimely death and still today Roberto is remembered as one of the greatest athletes and humanitarians of all time. One of Roberto’s dreams, the Roberto Clemente Sports City, is just part of the legacy he left behind. Visitors to Carolina, Puerto Rico are greeted by a 12-foot statue as they enter into a 304 acre sports complex. Roberto Clemente’s legacy is perpetuated by his wife Vera, and sons Roberto Jr., Luis Roberto and Roberto Enrique, who have been instrumental in continuing Roberto’s dream.