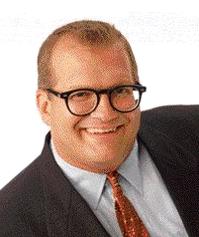 Drew Alison Carey (born May 23, 1958 in Cleveland, Ohio, USA) is an actor and comedian famous for his black-rimmed glasses. A former United States Marine reservist, he adopted his trademark crew cut during his time in the service.After a period spent performing stand-up comedy and supporting roles on a number of television shows, he was given his own sitcom on ABC, The Drew Carey Show (1995-2004), in which he played the assistant director of personnel at a department store in Cleveland, Ohio. Carey also hosted the United States version of the improvisational comedy show, Whose Line Is It Anyway?

In 1997, Carey published his autobiography, entitled Dirty Jokes and Beer: Stories of the Unrefined, where he shared memories of his early childhood, how his father died when Drew was eight years old, his revelation that he was once sexually molested, his bouts with depression, his failed attempts at suicide, his college fraternity years while attending Kent State University, and his professional career up to that time.

In 2000, he received an honorary Ph.D. degree from Cleveland State University.

Carey was the first TV star (as opposed to wrestler or athlete) to ever enter the World Wrestling Federation’s 30-man “Royal Rumble” battle royal match in 2001; he was promoting an improv comedy pay per view at the time. He appeared in a few backstage segments before his brief participation in the match; he eliminated himself by offering a bribe and then fleeing the ring when Kane came out.

Drew Carey is also unusual in Hollywood because he is not a liberal or a conservative but is in fact a libertarian and has expressed support for the Libertarian Party. The Drew Carey Show often supported a libertarian critique of political correctness, government regulations, racism and sexism and anti-gay bias with Carey’s cross-dressing brother, Drew dating a bisexual woman (played by Illeana Douglas) for two episodes, an ongoing storyline that was critical of the Boy Scouts of America exclusionary policy against gay men, and supportive of same-sex marriage.

For The WB’s 2004-2005 prime time schedule, Carey co-produced and starred in Drew Carey’s Green Screen Show, a spin-off of Whose Line Is It Anyway. It was cancelled by the WB, but picked up shortly afterward by Comedy Central.

Carey is also known for being a devoted Cleveland Browns, Indians and US Soccer fan. When he promoted The Drew Carey Show in 1995, at the same time the Indians were making a miraculous run at the World Series, he poked fun at the rest of baseball by saying, “Finally, it’s your team that sucks!”

Comedy Central ranked him number 84 on its 100 Greatest Standups of All Time list.