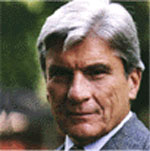 JOHN WILLIAM WARNER, Republican from Virginia, was first elected to the United States Senate on November 7, 1978. On November 5, 1996, he was reelected to serve his fourth six-year term.

A historical note: the Senate of the United States was established by the Constitutional Convention in 1787 and convened for the first time in 1789. Since that eventful day in history, Virginia, as one of the first 13 states, has had a larger number of senators serving in comparison to other states later admitted. A total of 50 persons have served the Commonwealth in the U.S. Senate. Virginians, however, have re-elected only four of the 50 to represent them for as many as four consecutive terms – Senator Warner is grateful to be one!

Senator Warner has had the good fortune – the privilege – to have been a public servant in seven different positions, with cumulative service of over thirty five years. His first opportunity began during World War II when in January, 1945, at age 17, he enlisted in the U.S. Navy. He served on active duty until the summer of 1946 and was honorably discharged as Petty Officer 3rd Class, electronic technician’s mate.

He then attended Washington and Lee University, from which his father graduated in 1903. He was awarded a B.S. degree in basic engineering sciences in 1949. Warner then entered the University of Virginia Law School.

At the outbreak of the Korean War in the summer of 1950, Warner interrupted his studies and commenced a second tour of active military duty, beginning in October 1950, this time in the United States Marine Corps. A year later, October 1951, as a first lieutenant in communications, he volunteered for duty in Korea and served as a ground officer with the First Marine Air Wing. Following Korean active service he remained in the Marine Corps Reserve for 10 years and was promoted to rank of Captain. Upon his return from Korea, Senator Warner finished his law degree at the University of Virginia.

The Senator has always acknowledged his gratefulness for the opportunity to serve with, and work on behalf of, the men and women of the armed forces. He owes his college and law education to a grateful nation that provided G.I. Bill opportunities to millions of veterans during that period.

In 1953, he was appointed a law clerk to the late Chief Judge E. Barrett Prettyman of the U.S. Circuit Court of Appeals, an opportunity sought by many of his class as a challenging way to start their legal careers. In 1956, he was appointed an assistant U.S. attorney and served four years in the trial and appellate divisions. He entered private law practice in 1960.

Senator Warner’s next public service began as the U.S. Senate confirmed his presidential appointment to be Under Secretary of Navy in February 1969. During a critical, intense period of the war in Vietnam, he served in the Department of Defense for over 5 years, completing his service as the Secretary of Navy in 1974.

During that period he also had special assignments in the field of diplomacy. Two being the representative for the Secretary of Defense to the Law of the Sea Talks in Geneva (1969-73), and subsequently; later he was principal negotiator and signatory for the United States of the “Incidents at Sea Executive Agreement” between the United States and the former Soviet Union (1970-72). This Executive Agreement is still in effect today and has been used as a model for similar agreements between other nations covering the operational directives for naval ships and aircraft in international sea lanes throughout the world.

Following his work in the Navy Department, Senator Warner was confirmed by the U.S. Senate to a position representing the Executive Branch in a wide range of bicentennial programs and activities in the 50 states during 1974-76.

Senator Warner’s public service continued with his election in 1978 to the U.S. Senate. In 1998, he was selected as Chairman, Senate Armed Services Committee. He is also the second most senior Republican member of the Environment and Public Works Committee and a member (former Chairman) of the Senate Committee on Rules and Administration.

For eight years, 1987-1995, Senator Warner served on the Senate Intelligence Committee. The last two years, from 1993 to 1995, he was Vice Chairman of the Committee.

He was a trustee, from 1967 to 1972, of the Protestant Episcopal Cathedral of Mount St. Albans in Washington, D.C., and from 1968 to 1979 he was a member of the Board of Trustees of Washington and Lee University. Senator Warner is a member of the Virginia chapter of Veterans of Foreign Wars, and the American Legion. .

Senator Warner was born February 18, 1927. He is the grandson of John W. and Mary Tinsley Warner of Amherst County, Virginia, and the son of the late Martha Budd Warner and the late Dr. John W. Warner, a physician and surgeon.