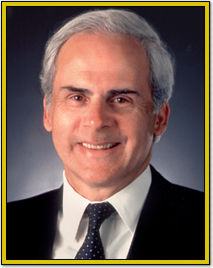 Frederick W. Smith was born in Memphis, Tennessee. The Smiths were a well-to-do family, but Frederick’s father died when he was only four, and the growing boy had to rely on his mother and uncles for guidance.

While attending Yale University, Fred Smith wrote a paper on the need for reliable overnight delivery in a computerized information age. His professor found the premise improbable and, to the best of Smith’s recollection, he only received a grade of C for this effort, but the idea remained with him.

After graduation, Smith enlisted in the Marine Corps and served two tours of duty in Vietnam. As the Yale-educated son of an affluent family, Lt. Smith had some adjustments to make to the realities of war, but he cherished the advice given him by a veteran Marine sergeant: “There’s only three things you gotta remember: shoot, move, and communicate.”

While in the military, the young lieutenant observed military procurement and delivery procedures carefully, with an eye toward someday realizing his dream of a vast network dedicated to overnight commercial delivery. Smith got his chance when he left the service and started his express transport business in 1971. “I wanted to do something productive after blowing so many things up,” he told an interviewer.

The young entrepreneur raised $80 million to launch Federal Express, informally known as FedEx. The delivery service began modestly with small packages and documents. On the first night of operations, a fleet of 14 jets took off with 186 packages. In the first two years, the venture lost $27 million. In a short time, the company was on the verge of bankruptcy. It appeared that Smith had lost all of his investors’ money, including the capital of his own brothers and sisters. But Smith succeeded in renegotiating his bank loans and was able to keep the company afloat.

Unlike many entrepreneurs, Fred Smith is also a hands-on manager, who directs every facet of corporate strategy. He determined at the outset that FedEx was in the information business — that knowledge about origin, present whereabouts, destination, estimated time of arrival, price, and shipment cost of his cargo was as important as its prompt delivery.

Another principle Smith applied at FedEx was to make sure every employee felt they could share in the success of the company. FedEx managers are carefully trained to ensure respect for all employees, and their performance is monitored. mangers are evaluated annually by both bosses and workers to ensure good relations between all levels of the company. Smith believes that fair treatment instills company loyalty, and that company loyalty always pays off. By 1997, the company was worth $16 billion, with 170,000 employees flying a fleet of 584 planes and 38,500 trucks to deliver 2.8 million packages daily to 212 countries.

In 1997, Smith acquired the $2.7 billion Caliber System, whose trucking subsidiary RPS ranked second in ground shipments, exceeded only by UPS, the United parcel Service. The RPS fleet of 13,500 trucks increased FedEx’s profit margin, because ground fleets are cheaper to operate than airplanes. It also gave FedEx the extra muscle it needed to step into the breach when FedEx competitor UPS was immobilized by a strike later that year.

Fred Smith’s effort to instill company loyalty bore fruit. During the UPS strike, when FedEx was swamped with 800,000 extra packages a day, thousands of employees, many of whom had already worked a full day, voluntarily poured into the hubs a little before midnight to sort the mountain of extra packages. Smith publicly thanked them in 11 full-page newspaper ads; he also ordered special bonuses.

When the strike was over and the smoke cleared, FedEx had pulled roughly two percentage points of market share away from UPS, increasing its share of the express transportation market to more than 43%. While UPS faces additional labor unrest among its pilots, FedEx pilots are among the best-compensated and most contented in the industry. The stock market responded to FedEx’s gains. Over the course of the year, the company’s share price rose by nearly 70%, to about $76.

Fred Smith does not allow FedEx to rest on its laurels. Continuous improvement is one of his fundamental management principles. The company has installed computer terminals in the offices of 100,000 customers and given proprietary software to another 650,000, so today shippers label 60% of their own packages. FedEx receives electronic notification to pick up the cargo, then ships and delivers. Competitors in the express delivery business are still rushing to catch up with FedEx’s technological advances.

Fred Smith has compiled a fortune estimated at $700 million by enabling the world of business to deliver its goods quickly, anywhere in the world. Businesses seeking to reduce to reduce the costs of maintaining large inventory are increasingly adopting “just in time” delivery practices, increasing the demand for express services like FedEx. The rise of Internet commerce and the growth of the global economy are also contributing to the growth of FedEx. With new facilities in the Philippines and Taiwan, exclusive cargo-routes into and out of China, and proprietary software for Internet catalogue service, FedEx is capitalizing on both of these trends.

It appears that the world is continuing to develop along the lines undergraduate Fred Smith predicted in his term paper over 30 years ago.