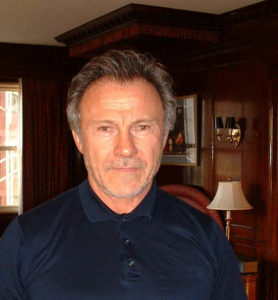 Best known for his edgy, intense and sometimes unnerving psychotics, degenerates and killers, Harvey Keitel has also essayed his share of surly husbands, benign cops, intrepid detectives and embattled regular guys in a prolific, but slow-to-ignite career which saw him turn to Europe for sustenance when his star was on the wane in Hollywood. An ex-Marine, Keitel overcame a childhood stuttering problem, training at the Actors Studio, studying under Frank Corsaro, Lee Strasberg and Stella Adler, and toiling primarily in summer stock, repertory, and the fringes of off-off Broadway and community theater before finally coming to prominence in the early films of Martin Scorsese. He had made his off-Broadway debut in Sam Shepard’s “Up to Thursday” in 1965 when he answered an ad placed by the then-NYU student director. After appearing in “Who’s That Knocking at My Door?” (1967), which evolved over time from a student short to Scorsese’s feature debut, Keitel enjoyed his breakout role as the director’s alter ego in “Mean Streets” (1973), though his more introspective character suffered by proximity to Robert De Niro’s explosive, out-of-control Johnny Boy.

Playing the first of his many violent, abusive parts in Scorsese’s “Alice Doesn’t Live Here Anymore” (1974), Keitel reportedly terrified co-star Ellen Burstyn with his verisimilitude. He continued his collaboration with the director, turning in an unforgettable performance as Jodie Foster’s long-haired, lover-pimp in “Taxi Driver” (1976), the sheer brilliance of his portrayal lost amidst the kudos for De Niro’s tour de force Travis Bickle. While De Niro would be Scorsese’s actor of choice for “New York, New York” (1977), “Raging Bull” (1980) and “King of Comedy” (1983), Keitel would not act again for Scorsese until 1988’s “The Last Temptation of Christ”, spending much of the interim performing well in mediocre and/or little-seen films. After landing the leading role in “Apocalypse Now” (1979), the actor had a falling out with director Francis Ford Coppola and was replaced on location in the Philippines by Martin Sheen. Instead of starring in one of the most publicized films of its day, he instead acted in Ridley Scott’s considerably more modest (and commercially unsuccessful) adaptation of Joseph Conrad, “The Duellists” (1977).

Keitel was outstanding as the street-smart, aspiring concert pianist who collects debts for his domineering father in James Toback’s feature directing debut, “Fingers” (1978), zooming in on women and danger with a self-destructive fervor. He also delivered a strong performance that year as an auto worker up against his corrupt union in Paul Schrader’s underrated directing debut, “Blue Collar”, but should have avoided the dubious British oater “Eagle’s Wing” (also 1978), directed by Anthony Harvey. Thus began his European phase, during which he acted for such international directors as Bertrand Tavernier (“Deathwatch” 1980), Tony Richardson (“The Border” 1982), Ettore Scola (“La Nuit de Varennes” 1982, portraying Thomas Paine) and Lina Wertmuller (“Un Compicato Intrigo di Donne, Vicoli e Deliitti” 1985), among others. There were two reteamings with Toback (“Exposed” 1983, “The Pick-Up Artist” 1987) and Brian De Palma’s unsuccessful stab at black comedy, “Wise Guys” (1986), but it was his portrait of a tortured, ambivalent Judas Iscariot in “The Last Temptation of Christ” that brought the actor back into the eye of the general public.

Though his appearance in three bombs (“The January Man” 1989; “The Two Jakes” and “Two Evil Eyes” both 1990) threatened to start the unhappy cycle all over again, his meaty roles in three successful 1991 films (“Mortal Thoughts”, “Thelma & Louise”, “Bugsy”) reinstated him on the industry’s A-list, with his forcefully-drawn performance as Jewish mobster Mickey Cohen in “Bugsy” earning him his first Academy Award nomination as Best Supporting Actor. A quarter century after his first feature film, Keitel found himself with the freedom and bankability to do the work he wanted and went about becoming a significant figure in 90s independent filmmaking. He proved a godsend to first-time writer-director Quentin Tarantino when he agreed to star in and co-produce “Reservoir Dogs” (1992), enabling the project’s budget to soar from $35,000 to $400,000 and attract other major talents as well. His no-holds-barred performance as the corrupt, substance-abusing anti-hero of Abel Ferrara’s “Bad Lieutenant” (1992) also brought critical kudos and helped boost the reputation of that previously “B-plus” indie filmmaker.

Keitel credits Jane Campion, writer-director of “The Piano” (1993), for helping him alter his tough-guy persona with his surprisingly romantic portrayal of Holly Hunter’s lover in that film, although his more typical, cool machismo was back on display in Tarantino’s galvanizing “Pulp Fiction” (1994). Perhaps never better than in his subtle, low-key performance as Auggie Wren, the proprietor of a Brooklyn cigar shop in Wayne Wang’s popular art house movie “Smoke” and its companion piece, “Blue in the Face” (both 1995), an improvised story shot on the same set immediately after the completion of “Smoke”, Keitel was also prominent in more mainstream fare like Spike Lee’s “Clockers”, Tarantino and Robert Rodriguez’s “From Dusk Till Dawn” (1996) and James Mangold’s “Cop Land” (1997). Still, non-studio fare remain close to his heart, and his involvement as executive producer of Tony Bui’s “Three Seasons” (1999), as well as playing its ex-Marine in search of redemption, helped propel that film to its unprecedented winning of both the Grand Jury Prize and Audience Award at Sundance. He also reteamed that year with Campion on “Holy Smoke”, playing a cult exit counselor who goes astray deprogramming Kate Winslet. Returning to his military background, Keitel was part of the all-star ensemble of the WWII subMarine tale “U-571” before lending his talents as Satan in the Adam Sandler comedy “Little Nicky” (both 2000).

Together with his partner Peggy Gormley, Keitel has his own New York-based film production company, The Goatsingers, which has produced independent films such as “The Grey Zone” “Henry and the Second Gunman,” “It’s Me the Hero” and “Dreaming of Julia;” Keitel also acted in each of the films. In 2002 the actor also made a return to mainstream commercial fare by appearing in “Red Dragon,” third in the series of films featuring Anthony Hopkins as Dr. Hannibal Lecter.

In 2002, Keitel executive produced and co-starred in the Nazi drama “Grey Zone.”