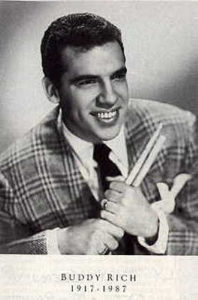 Bernard “Buddy” Rich took big band drumming to new heights, propelling ensembles with a stunning amalgam of endurance, velocity and speed. Yet Rich played with balletic precision and elegance that belied his long-time claim of never practicing. Born in Brooklyn, N.Y., on Sept. 30, 1917, Rich made his show business debut at 18-months with his parents’ vaudeville act, billed as “Traps, The Drum Wonder.” He danced on Broadway by age 4, toured Australia at 6 and led his own band when he was 11. A consummate player, Rich’s prowess ranged from light-as-a-feather sensitivity behind piano trios to a G-force sound in big bands.

But it was the latter ensembles that won him recognition. Rich began his big band work with Joe Marsala in 1937, followed by gigs with Bunny Berigan, Harry James, Artie Shaw and Benny Carter. In 1939, he joined Tommy Dorsey’s band, where he cemented his reputation as a big band artist and roomed with singer Frank Sinatra. The two — boasting equal doses of talent and ego — often clashed but maintained a mutual friendship and respect throughout their careers.

Following a brief stint in the U.S. Marines, Rich rejoined Dorsey’s band in 1944, and was featured in several successful Hollywood movies. In 1945, when big bands were going the way of dinosaurs, Rich bucked the odds and formed his own with $50,000 from Sinatra. The group played for two years until Rich finally ran out of money. From 1951 to 1966, Rich played with a variety of groups, including his own, Harry James, Les Brown, Charlie Ventura’s Big Four and Norman Granz’s Jazz at the Philharmonic. In 1966, Rich again formed a big band — while the British rock invasion swept America — and won international acclaim with such masterworks as a 10-minute “West Side Story” medley. The band eventually became a farm system for young up and coming players, and earned Rich guest time on the Tonight Show with pal Johnny Carson (himself a drummer).

Rich was regaled as much for his legendary (and sometimes cruel) temper, but nevertheless, won accolades from musicians and fans alike. Rich suffered from a heart condition and, following surgery for a malignant brain tumor, died from heart failure in Los Angeles on April 2, 1987. Sinatra gave the eulogy at the funeral. Rich’s Slingerland drums are on display at the Down Beat Hall of Fame. In 1974, Rich was elected by the Readers into the Down Beat Hall of Fame.