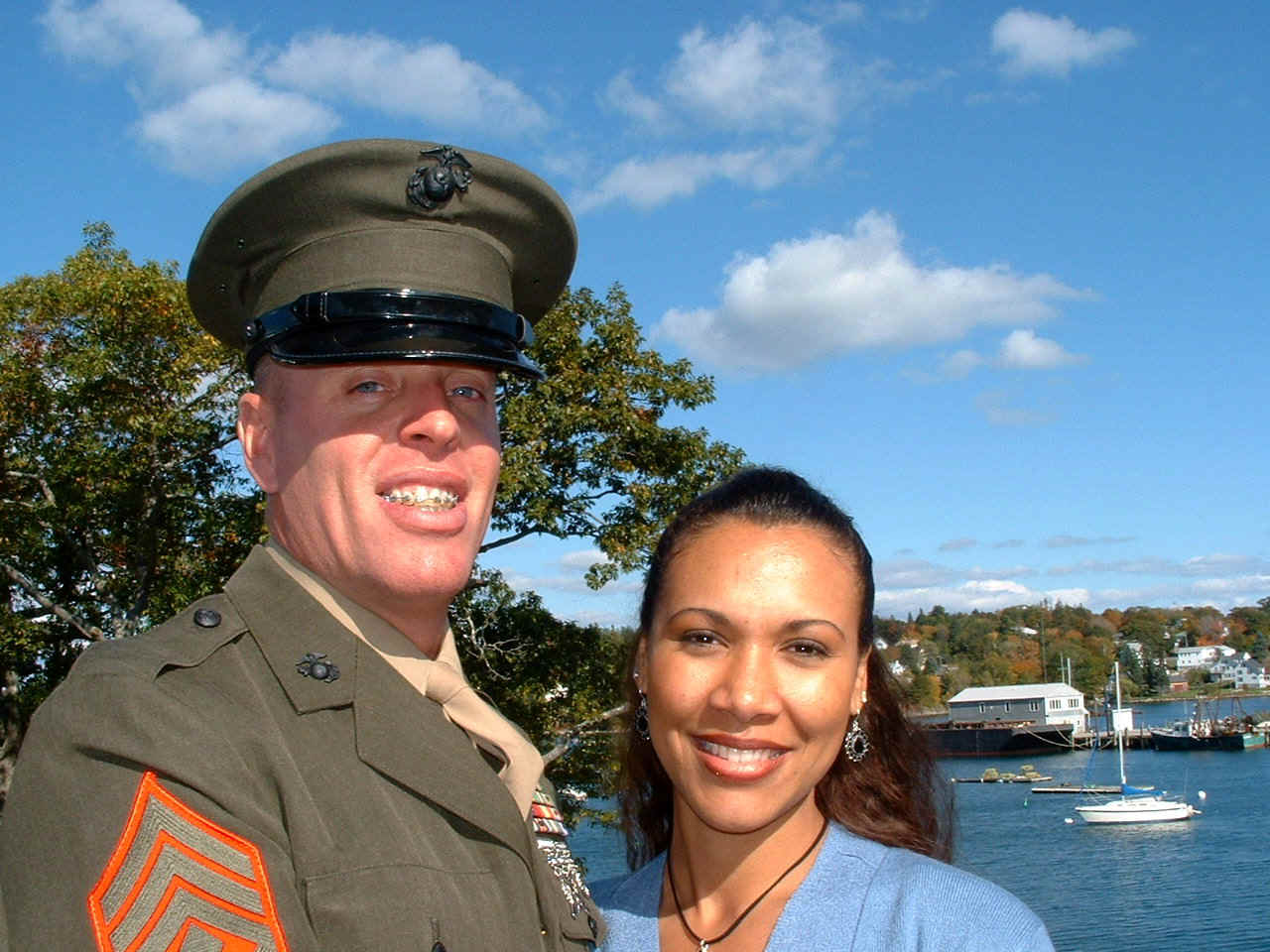 TOPSHAM – The calm of southern Maine has provided a content prelude to the retirement of First Sergeant D. Ellis Cozine, USMC. He arrived with his wife Cleopatra, in May 2001 to his Inspector Instructor post at Topsham with Alpha Company, 1st Battalion, 25th Marines.

Cozine, 38, will officially retire after 20 years on New Years Eve this year, however with accrued leave – he departed Maine in early November.

From their home in Woolwich, Ellis headed toward the command in Topsham each morning, Cleo to Booth Bay Harbor. The house they were renting, a post-and-beam on eight acres, is far more desirable than the base housing the could have waited for. “We’re just 300 yards from the water,” says Ellis, “and we love our neighbors,” Cleo adds. She is working at St. Andrews Hospital for Lincoln County Share Services.

“We couldn’t have picked a better place to live,” Ellis said repeatedly. The calm and hospitality of Maine was necessary for the unforeseen. Just 11 months after their arrival, Cleo found herself facing a six-hour spinal surgery at St. Mary’s Hospital. During a routine physical, her physician discovered severe problems with her lower vertebrae. Less than a year into her job she had to leave on disability for eight weeks.

The two were surprised by the support she received from her coworkers – who visited her in the hospital and at home, as well as the patience and understanding of her employer. Soon the two will move to St. Louis where Ellis will work for Bayer Corporation. They agree that their time in Maine has been a great downshift toward retirement from a full throttle tour in the Corps.

As with any assignment however, there have been hard moments. The toughest for Ellis is without dispute. Last February a Marine from Bristol, Maine, Aaron Pinnetti, died while on a training exercise at Camp Pendleton, CA. Ellis waited all day at the home of his parents to make that horrible notification, in person. “We were about to change their lives forever – and not in a good way,” he recalls.

Heartbreaking details aside, Ellis went above and beyond to comfort Pinnetti’s family. He complied and delivered a shadow box with Pinnetti’s medals and ribbons – including a National Defense Service medal. “I did it as much for me as for them,” Ellis whispers, his heart aching all over again. He maintains regular contact with the Pinnetti family and hopes to always.

Journey with Cleo
“I picked the most beautiful flower there and took her with me,” Ellis says of Cleopatra. As he rides from Topsham to Booth Bay Harbor where she is training her replacement, Ellis is very enthusiastic in recalling their journey’s beginning. In his “alphas” or olive service dress uniform, he seems like a Marine from a much earlier era. While on embassy duty in Costa Rica in 1995, Ellis found himself making arrangements for the Marine Corps birthday ball, the revered tradition, at the Sheraton Herradura in San Jose.

He says he remembers her walking past him – and taking his breath away. She too recalls him trying to make eye contact with her moments later, but her shyness caused her to duck away in an office, where she worked on the hotel switchboard. “I couldn’t look at him,” she recalls smiling.

Two weeks passed when one of Ellis’ colleagues asked if he had called her. He said, “there’s no way, she’s too beautiful.” He hadn’t stopped thinking about her however; so he sought her out via his contact at the five-star hotel – and the leverage of having just spent over $15,000 for the ball.

Within hours he was on the line with Cleopatra, then 20, from nearby village. “Do you remember me? I’m this big, ugly Marine…” she interrupted, “with blue eyes.”

Soon they went to lunch, but it was three months before they kissed. Her values were to be new to this man from Texas, but certainly welcome.

They married in Costa Rica just before the end of his tour – eighteen months after they met. Soon they were headed to Quantico, VA.

The three tours between Costa Rica and arriving at Topsham were very demanding on Ellis’ time. First at Quantico as Instructor Advisor at Marine Security Guard Battalion. Then he was granted the privilege of attending Virginia Commonwealth University under the Staff Degree Completion program, where he earned his degree as part of his Marine Corps enlistment. From there he was assigned as the Company First Sergeant, Kilo Co., 3rd Battalion at Parris Island, South Carolina, the most absorbing assignment for him.

These matters are of no consequence to Cleopatra. Her demeanor in recalling these assignments does not waver from other topics of discussion. As she sits in a conference room at the hospital offices, she smiles and glances often across the table to her husband. Her humility and gratitude to accompany him is undeniable. Her upbringing in poverty and geographic isolation in a deeply faithful culture is probably the cause of her loving attitude, Ellis explains. “I didn’t know what I was getting when I met her. But I have been so blessed by her in so many ways. She has made me a better man.”

Corps heritage
Ellis’ years gaining his senior drill instructor belt at Parris Island is which he is most proud. It was then he felt he was having the most positive influence on soon-to-be Marines. He has sought to live up to the role model he exemplified.

One way in which he honors his commitments is through his devotion to his child. Although he was divorced many years ago, he has flown his now 15 year-old son Brenham to every post he has occupied, excepting a tour in Africa where the violence was local.

His mother Joey and father Donald Sr. met while both serving in the Corps after the Korean war. On his desk Ellis has a beautiful black and white photo of his mother soon after her enlistment. Joey is from Fulton, NY originally but settled with Donald in his home of Ft. Worth, TX. Presently they live on twenty acres near Tyler, TX.

And they love Cleo. When Ellis flew Cleo to Texas before the wedding his father pulled him aside and told him that if things didn’t work out, he didn’t need to come home again – but she would be welcome anytime.

During his career Ellis happened upon renowned former Marine, Maj. H.G. Duncan, a writer of several books about the Corps. Titles include, “Brown Side Out”, “Green Side Out” and “Sea Stories.” These books are coveted by some Marines as being the most accurate accounting of the Marine experience.

Maj. Duncan recently wrote some of his thoughts about the soon retired Cozine. “Cozine has twice been a drill instructor at Parris Island. He has trained thousands of Marines. He has people in America who will remember him for as long as they live. He was a harsh drill instructor, but fair. He loved his recruits with a tough love the initial training demands.

“I recall several years ago when I was at PI. Cozine had a recruit who had to be dropped from his platoon due to some injury. When he recovered, he was put into another battalion/platoon. But Cozine, who was no longer his DI, still looked after him. He asked me to come with him to talk with the recruit who would be graduating that week. We went there. Cozine brought the recruit out, and we talked. I was touched by Cozine’s concern and compassion for that youngster.

“He cares!! I wish I had had a DI like Cozine (although the ones I had were great and unforgettable).”

Cozine invited the Major to speak at his year’s ball, and of course Duncan happily accepted.

Ellis’ official retirement ceremony was held at Quantico, Virginia on November 16. In excerpts from a letter to his staff at Topsham he wrote,

“It is a sobering thought. My entire adult life has been spent with Marines, my dearest and closest friends are Marines. Next to my wife and my son, the Marines that I have had the honor to serve with and lead, have been the most important people in my life and are the most dearest to me. I can’t imagine my career in the Corps without you all in it. Thanks you for touching my life and making a difference in my career and our Corps. November 8 marks my final formation and I will take the uniform off for the last time, but my heart will always be with the Corps; and the Corps; and the Corps.”