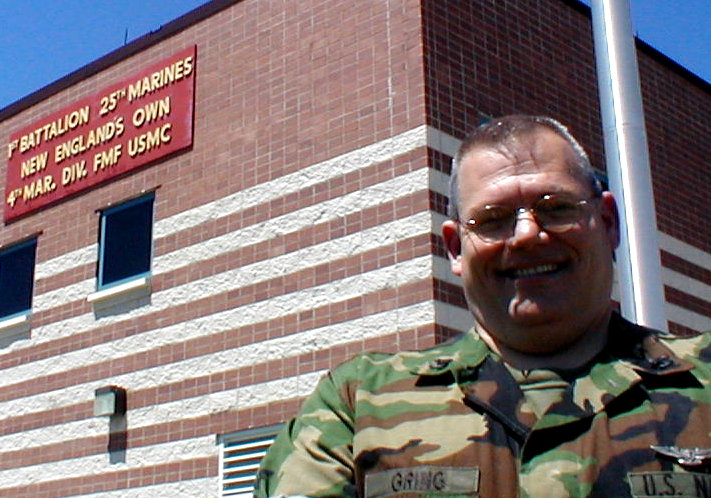 DEVENS, Ma – Chief Petty Officer Michael A. Gring rocks back in his office chair, reflecting on three decades serving the Navy and Marine Corps. He’s seen the best of his military and the worst of war and remains humble, unassuming and relaxed.

In his office at 1st Battalion 25th Marine Regiment the overhead fluorescents are off and a low wattage desk lamp is on. Classical music plays on the multi-band radio and college degrees – including one from Harvard, hang on the wall. Chief Gring prepares for the rest of his life – a long way from the seaman recruit of 1973.

He graduated from Elizabeth Ann Johnson High School in Mount Morris, Michigan in 1972 and arrived in San Diego, California for boot camp the following February. There he also attended hospital corpsman school. After completing operating room technician school in Portsmouth, Virginia Chief Gring spent three years at the naval hospital at the Academy in Annapolis, Maryland.

His experience serving both the Navy and the Marine Corps lets him confidently differentiate between Marines and others. “The thing about Marines, they don’t question – they do. It’s the ultimate form of respect.”

Perfectly serious in demeanor he says, “To tell 50 Marines, ‘OK men, we’re going to charge up that hill and probably half of you will get killed,’ and they all say ‘aye aye’ and head up prepared to give the ultimate sacrifice.”

Further differentiating between blue and green, the Chief illustrates, “I remember this one 14-mile snowy march I was on with these Marines years ago. I was marching along side this Marine and I said, ‘Now I remember why I didn’t join the Marine Corps.’ He said, ‘Doc, where are you now?’ He said something so profound, I’ll never forget that.”

The relationships formed appear to be the greatest reward of his service. “It’s funny how things define your life. I’ve met some of the most wonderful people in the world. It’s the truth, I’ve met people I’ll never forget, and a lot of them will never know what a positive effect they’ve had on my life.”

While at the Naval Reserve Center in Quincy, Massachusetts he worked with Commander Brian Guidodoni, who died of cancer two years ago. “I was devastated when he died. He’s got two young daughters.”

Just as fresh in his mind is the motorcycle death of HM3 William Schultz, who died in Florida twenty years ago. “In that locker over there I still have the lease from the apartment we rented in Virginia Beach with three other guys.” Chief Gring has remained in touch with the rest through the years.

It was in Annapolis that he met Captain Jay Cox, who profoundly influenced the Chief’s career. “He was an outstanding surgeon. I think that was when I learned to teach. He was the consummate teacher.” He continues about the affect of that experience, “When I was at a lot of my other commands, you’ve got to get in there and teach them, and you’re the sole medical provider. If you know the subject then you shouldn’t have a problem. If you know something you should share it,” then he jokes, “I don’t know a whole bunch but I can read.”

The worst days of his career are easily identified as the days he had to perform Casualty Assistance Calls. Ordered to go to the home of the parents and wait without leaving until someone arrived, then to inform in no uncertain terms, that their child is dead, was brutal for him.

He knows the sacrifice those parents made when their child enlisted. Chris Gring is a Marine reservist and Cary Ann Gring is a recently honorably discharged Airman, now a Staff Sergeant in the Air National Guard.

“I remember once my C.O. told me, ‘we’re about to ruin these peoples lives forever.'” One mother wouldn’t open the door as if maybe not hearing it would keep it from being. Another mother welcomed him in assuming he was the recruiter for her other son who was enlisting. “It’s hard not to cry. I hate it,” the Chief says frankly.

The only subject guarded by the Chief is his Gulf War experience. He was on the ground in Kuwait with a Marine unit for many months, returning home when the conflict ceased. His exercises were classified information – and his personal experience is something to remain buried deep in his heart.

“Its amazing how much people can hate each other. It’s always different when someone’s shooting at you, those bullets don’t have names on them. A lot of times the Marines are the first in and last out. Until you get into that situation, you can’t know what it’s like,” is all he will say. Apparently war’s tragedies are greater than words will reveal.

The corpsmen who have gone before him are dear to his heart. At the entrance to the medical suite at 1/25 the Chief has placed the photo and biography of every corpsman recipient of the Medal of Honor, just as they hung at his last post.

Chief Gring is quite satisfied presently. “We’re the largest enlisted group in the military; corpsman. But we’ve got the best equipment here and I believe that I have the best corpsmen. I have no problem going to work every day.” At his station in central Massachusetts he oversees the medical care of several hundred Marine reservists.

Battalion Inspector Instructor Lt. Col. John Monahan is brief but clear in his description of Chief Gring’s effect on the unit. “He epitomizes the independent medic. He’s a fire and forget missile, I can just point him in a direction and it’s done.”

Since the Gulf war, the Chief has worked hard on his education. In 1995, while stationed at the Navy/Marine Corps Reserve Center in Grand Rapids, Michigan he completed two associates degrees from Grand Rapids Community College. In 1999 he graduated from Harvard University’s evening Bachelors program while stationed at Naval Reserve Center, in Quincy Massachusetts. He expects to complete his Masters from Harvard’s College of Public Health in December 2002.

While his retirement from the Navy looms, at 48, Chief Gring will be embarking on his civilian career. “I’d like to get into health care policy.”

A matter dear to him is brought about by the many circumstances under which he has provided medical care – and the broadening his education has allowed. “We’ve got people in this country who decide, ‘are we going to eat this week or am I going to get my heart medicine?’ I really believe in preventative medicine. Our health care system doesn’t take care of that.”

Despite his years at the top of the enlisted ranks, Chief Gring is mindful of his role as a student, a devoted Sailor. “I’ve been blessed to have leaders who have led. They’re all leaders, I respect them.” It appears the corpsman beneath Chief Gring may be thinking the same thing.

Editors Note: Special thanks to Lt. Col. John Monahan for his invaluable contribution to this story.