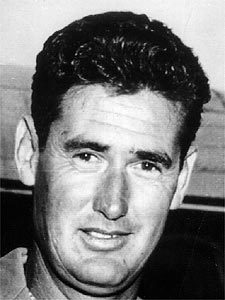 Considered by many to be the greatest hitter to ever play the game of baseball, Ted Williams is a true personification of the Red Sox mystique. Williams played with the Fenway Boys from 1939-1960. His tremendous career was interrupted twice — once when Williams served in World War II from 1942-1946, and again in 1952-1953 when he missed almost the entire seasons serving in the Korean Conflict. Nevertheless, Williams still amassed 521 home runs, including a dramatic farewell homer on his last at bat in 1960.

Adored by the fans, pursued by the press, “Teddy Ballgame” thought of only one thing upon entering the batter’s box: ‘I am Ted Williams, the world’s greatest hitter.’ In 1941 he compiled a batting average of .406, the last player ever to cross the .400 barrier. Not having an overwhelming physical presence, Williams proved that hitting is indeed an art. As Luke Salisbury wrote in A Certain Alienated Majesty, “The high average hitters are artists. They do not hit so high because they have physical gifts others don’t. They have mental gifts others don’t.”

Williams never offered a dull moment, whether he was on or off the field. The explosive drive that helped transform him into one of the best the world has seen also affected his relationship with the media. In retrospect, this occurred because Williams was as close to perfection as a ball player could get. His every move was tracked in order to satisfy the insatiable appetite the public had for him. No other man of his day was followed or photographed more: each day Williams was hounded by some 20-25 journalists whose sole mission was to find both the good and bad within him. Perhaps this contributed to Ted’s constant determination to be the best he could be.

Ted Williams retired from the Boston Red Sox at the end of the 1960 season with a lifetime batting average of .344, a lifetime home run count of 521 and a reputation that will span generations to come.