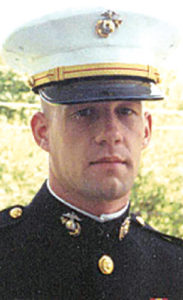 The flag was lowered to half-staff at City Hall and all city offices and Mayor Peter LaVallee is sending a letter expressing condolences on behalf of the City Council and staff. La Mont was the son of former City Councilman James La Mont, who served on the council representing the 3rd Ward from 1986 to 1990.

“The Mayor, Council and City of Eureka staff extend our deepest condolences to the La Mont family,” city officials said in a press release issued Thursday. The city’s flag will be flown at half staff through noon on Memorial Day on Monday.

In Washington, D.C., North Coast Congressman Mike Thompson plans to read a memorial statement for La Mont into the Congressional Record on the House floor. Thompson, a Vietnam veteran, is also sending a letter expressing his condolences to the La Mont family.

La Mont, 32, and at least three other Marines were on a resupply mission in Central Iraq on Monday afternoon when shortly after takeoff their CH-46 Sea Knight helicopter crashed into a canal southeast of Karbala. All aboard were killed, as well as another Marine who drowned in the canal trying to save the crash victims. La Mont’s body was recovered on Tuesday, marking the first confirmed North Coast casualty of the Iraq war.

La Mont graduated from Eureka High School in 1989 and from San Diego State University in 1994, majoring in criminal justice. He also enrolled in Marine Corps officer’s training school while in college, having considered eventually entering the FBI or CIA. But when he took service entrance exams, La Mont did so well he qualified to become a pilot.

After finishing college, La Mont entered active duty as a lieutenant and completed flight school in Pensacola, Fla. During almost a decade of military service, La Mont was involved in the conflicts in Kosovo, Afghanistan and Iraq. He also helped in the relief efforts after a major earthquake in Turkey in 1999.

During the Iraq war, La Mont’s job was to fly wounded servicemen to hospitals in Kuwait.

La Mont had been stationed at Camp Pendleton prior to being shipped to Iraq before the war. His parents, James and Vivian, of Eureka, are at his home in Camp Pendleton awaiting further word from Marine authorities.

The La Mont family is expecting some good news. Andrew La Mont’s nephew, Marine Sgt. Christopher La Mont, who has been serving in the Middle East with the Marines’ 1st Expeditionary Unit since October, is scheduled to arrive stateside in the next few days.

Along with Andrew and Christopher La Mont, Navy Cmdr. David Buckey, a cousin, is also serving in the Persian Gulf.

A memorial service for the helicopter crew is being planned. Funeral arrangements for La Mont are being handled by Sanders Funeral Home in Eureka.