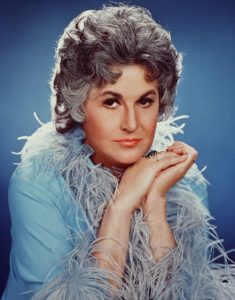 Beatrice Arthur (born Bernice Frankel on May 13, 1923), is an American actress and comedienne with a distinctive deep voice, acid wit, and height, standing almost 5 ft 10 in (1.77 m). Her notable television roles included the title role on the popular sitcom Maude in the 1970s and a starring role on The Golden Girls in the 1980s.

In the former she played Maude Findlay, an outspoken “limousine” liberal living in Tuckahoe, Westchester County, New York; the show was a spinoff from All in the Family, on which Arthur had appeared in the same role, playing Edith Bunker’s cousin, whom Archie couldn’t stand.

In the latter she played the character Dorothy Zbornak, a middle-aged woman who lived in a Florida house with two room mates (Betty White and Rue McClanahan) and Dorothy’s short-tempered yet hip old mother, played by Estelle Getty. One of the most ironic things about casting Getty in this role was that she is actually two months younger than Arthur, so Getty was heavily made-up to seem significantly older.

On stage, her roles included “Lucy Brown” in the 1954 Off-Broadway premiere of Kurt Weill’s Threepenny Opera, “Yente the Matchmaker” in the 1964 premiere of Fiddler on the Roof on Broadway, and a 1966 Tony Award-winning portrayal of “Vera Charles” in Mame. In 1981, she appeared in Woody Allen’s The Floating Lightbulb; two decades later she toured the U.S. in a one-woman show which opened in Broadway in 2002 as Bea Arthur on Broadway: Just Between Friends. In real life, Arthur was good friends with legendary actress and former co-star Angela Lansbury, and in real life Arthur did not get along with Betty White for most of the time that they worked together on Golden Girls, but they have since become close, especially in light of their mutual friend, Estelle Getty’s health woes.

Arthur was born in New York City, but she grew up in Maryland. She became a medical technologist before World War II, when she volunteered for the U.S. Marine Corps, becoming one of its first female recruits.

She was married for many years to her second husband, director Gene Saks, with whom she adopted two sons, but the marriage ended in divorce.