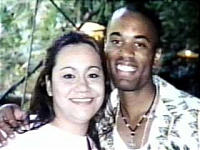 Marine’s Mom Says He Told Her, ‘Don’t Cry For Me’
SAN DIEGO — Camp Pendleton Marine Michael Vann Johnson was just 25 when he died trying to tend to his wounded comrades.

“He was there to help someone who was injured,” said Janisa Hooks, his elder sister. “There was a grenade, and shrapnel hit him in the head. The men he trained with, they were brothers. He didn’t want to see them go over and fight and he sit back and do nothing. He felt there was need for him to be there.”

Johnson was killed March 25. He was a Navy medic assigned to the 1st Marine Division who was born and raised in Little Rock, Ark.

Johnson’s parents said they learned the horrible news from his wife, Cherice, who was in San Diego.

“The loss will be great,” said Johnson’s father, Michael Sr. “I’m not going to let one day of tragedy ruin 25 years of good memories. I walk in my son’s name. He is my hero. Nobody else could be my hero. He is my hero.”

Johnson’s mother, Jana Norfleet, said she recently got a letter from her son saying he was going to be OK. She said he had written that God had “twisted a guardian angel around him.”

“It was his duty as a serviceman to go wherever the country needed,” said Johnson’s father. “He was brave enough to do that.”

His parents said that his body would be shipped first to California and then brought to Little Rock, where funeral services are to be held. “He served for us so we can all walk around the United States and be free,” said his sister. “He made peace with God and himself before he went over.”