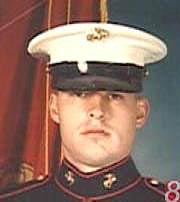 (reprinted from WISHTV.com, Indianapolis, IN, April 15, 2004)
Family: Marine Was Proud to Serve

Deryk Hallal is the 25th Hoosier soldier to die in Iraq. The 24-year-old Marine from Indianapolis died during a gun battle on Monday.

Deryk’s family has spoken to News 8 about their patriotic son, and how all he every wanted to was serve the country as a Marine.

Deryk was a graduate of North Central High School. He was stationed at Camp Pendleton in
California and deployed to Iraq.

His most recent letter to his family asked that they pray for his fellow Marines. Just days after receiving the letter his family learned that Deryk had died in a gun battle.

His parents say Deryk was doing exactly what he wanted to do: serving his country. His uncle, Jamon Jack, talked about how Deryk, although young, helped him make an important personal decision. Jack says he was working as a reserve policeman for the Indianapolis Police Department, a job he loved.

“But when I knew that the Lord had touched my heart and wanted me to surrender to the full-time ministry, to give up my badge, I really struggled with that choice,” said Jack. “I talked to Deryk. I said, ‘Hey, Deryk, what do you think?’ And he said, ‘Uncle Jay, the Lord wants you to do that. It’s probably the right thing to do.’ Out of the mouths of babes, it’s that simple. He made it all clear.”

Jak says his nephew’s decision to serve his country was in keeping with Deryk’s personality. “So it did not surprise me a bit when Deryk had his desires to be a sports agent or other things he wanted to do, after 9/11 hit, he knew it was very clear what the Lord wanted him to do. And that was to protect the freedom of this country,” said Jack.

Jack said the family is going through an extremely hard time. “It hits in phases. It’s like we want to wake up in the morning and pretend all of this has not happened. But it’s a reality, and I truly believe the Lord has his plan in this.”

The family is still making arrangements for Deryk’s funeral. “It’s always hard to say good-bye to someone that you love so dearly and always brought so much cheer in your life,” said Jack.