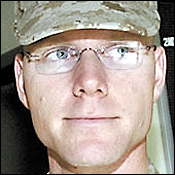 (reprinted from the Metro West Daily News, August 8, 2004)
Milford mourns the loss of a hero: Many see senseless tragedy in death of Marine Elia Fontecchio

MILFORD — Before Elia Fontecchio died a war hero on Wednesday, Manuel Teixeira of Milford knew the former 1992 Milford High School graduate as a little boy he once baby-sat.

“I remember him when he was this high,” said Teixeira yesterday as he lowered his hand about 3 feet off the floor at the Italian American Veterans Club Post 40 in Milford. “The best always die young and he was the best.”

According to the Department of Defense, Fontecchio, 30, a Marine, died Wednesday after being injured during a battle in Anbar province, considered to be a volatile Sunni-dominated region west of Baghdad.

Teixeira was friends with Elia’s father, Dennis Fontecchio, and was Elia’s baby sitter.

“He was about 5 or 6 when I baby-sat him,” Teixeira said. “He was a wonderful kid. As a kid, he was very artistic and he was very nice. Anybody in Milford should be proud to have a son like Elia.”

Brendan Connolly of Milford, who sat on a stool next to Teixeira, said he knew the Fontecchio family well.

“I helped teach Elia’s father the drywall business,” said Connolly. “I knew Elia and I knew the kids. They were a wonderful family. I’m just so sorry to see him die this way.”

Sadness from the local veterans at the club quickly turned into anger against the Bush administration.

“It’s a shame,” said Ernie Tusino of Milford, a Korean War veteran in the Army from the 160th Infantry Division. “He should not have been over there in the first place. It’s all because of Bush’s obsession with Iraq. If Bush had to wear a uniform in the line of fire, he wouldn’t be over there. Bush is a draft dodger. My prayers go out to Elia’s family. This is a sad day — that’s all.”

Alfred Lanzetta of Milford, a World War II Army veteran, said “we need to take all the troops home. Let the Iraqis take care of their country themselves. I knew the family and his grandfather. I’m just so sorry and it’s a shame this had to happen. Elia should never have been there.”

Tom Davey of Milford, a Navy veteran of the Korean War, said Elia Fontecchio should be remembered as a hero.

“You have to give that kid a lot of credit,” said Davey. “This was his second tour of duty and he volunteered for it. It’s a shame he’s dead, because I can’t say enough good things about him. It’s sad he died in this war and not something like World War II where we were defending our nation. This applies to everyone who died in Iraq. We should not be over there. We are not defending our country.”

Ben Zacchilli of Milford, a World War II veteran in the Air Force, said he did not want to comment on politics. “I knew the family and they were a good family. I just want to offer my condolences. That’s all.”

Even civilians felt the sting of Elia’s loss. Millie Niro of Milford was friends with Elia’s grandmother, Ann Szady of Bourne.

“When I heard that Elia died, I called his aunt, Pauline Chaplin, to find out if it were true,” said Niro. “She was making signs for his return home when she found out. He only had two weeks left. His family was just waiting for him to come home. I just thought it was terrible. And for what? I’m voting for (John) Kerry. I don’t think we needed this war.”

“I know Dana very well. It’s such a tragedy for the family. I feel terrible for the family and all the people affected by Elia’s death,” DeBartolomeis said. “My condolences and sympathy go out to his wife and family and his young child.

“It’s tragic to be taken by war,” DeBartolomeis said from his Milford home yesterday. “You can really feel it when it hits so close to home. The town of Milford is a good community and a close-knit community and I hope everyone says a prayer for Elia and his family.”

Selectman Brian Murray questioned the purpose of the war when learning of Elia’s death in Iraq but was grateful for his service.

“It’s just a continuing tragedy for our soldiers to continue to suffer injury and death in Iraq,” said Murray from his Milford home yesterday.”I have a sense of sadness for Elia’s loved ones. We should be thankful he chose to serve his country. Our thoughts and prayers are with him and his family.”

Elia Fontecchio’s burial and funeral services are expected to take place next week in Florida at a time and place to be announced. No further information on services was available at this time.