A long way from piloting helicopters, LtCol. John Worman is the Officer in Charge of the Liaison office. He also oversees five liaison Marines at Walter Reed and two at Andrews AFB. And he knows that second only to Marines needs in warfare is the Corps 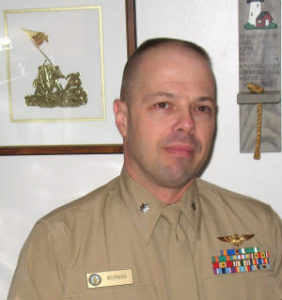 commitment to its fallen and wounded. “The Marine Corps has put time, power, money toward casualty care.”

And with a commander’s confidence he noted, “thatï¿½s why the Marines you meet seem to be pretty well adjusted for what theyï¿½ve been through.”

LtCol. Worman should know. He’s seen Marines in possibly every manner of form. He was enlisted Navy. Then a Naval Academy grad, 1986. Onto a Marine active duty commission piloting CH-53’s. Evolving then to Inspector Instructor for the 8th Tank Battalion/A Co. Anti-Terrorism Battalion. Now high-profile Washington and weekly visits with the Commandant and his wife.

So a primary mission of his is to keep that well-oiled machine called the Liaison office running. He uses humor. And camaraderie. And outings. And spontaneity. His office front is abuzz with Marine activity. The rear of his office – his domain, is low-lit with jazz music whispering from the computer and many pictures of him and his Marines in happy times.

Don’t let his lightheartedness mislead. His stepbrother Matt Koch, a soldier in the 70th Engineer Battalion, was killed in March 2005. He knows war and tragedy and everything in between.

“The emotional experiences with the feeling, as trying as they are, are the most rewarding,” the Colonel said of those treacherous moments with family members in distress. “Whether you shed tears with them or just let them talk,” that’s when he’s reminded of the importance of his leadership and his staff.