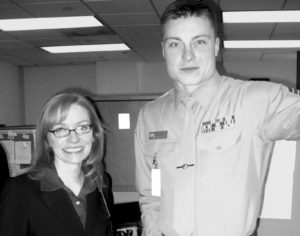 Poor Sgt. Stan Mayer. That fine Marine has been interviewed too many times, he’d probably say. Combine that with 10 months in Iraq with 3rd Battalion 25th Marines in 2005 and the two conspire to create a press-weary and somewhat paranoid yet very patient and polite warrior.

Unfortunately he spilled to this journalist last fall, while he provided extensive interview time on the Graham project, that he would rather work few other places in the Corps than with the Liaison office at NNMC Bethesda.

Ashamedly, at the time I wasn’t thinking about the patients there. I was thinking that then Cpl. Mayer should get whatever he wants. He’d been heartbroken by the horrific and complicated death of his best friend LCpl. Lance Graham (click here for Graham project). He’d watched dozens more from his battalion die. He’d been betrayed by loved ones. He’d worked hard for little pay. He needed to find his spot – even if briefly, I thought.

Soon I realized that what little press the Liaison office had received was enough to stir my interests. And if Tom would go with, Corps Stories might be a great forum for more positive coverage for those Marines. If Stan thought so much of it, it had to be a great command.

Tom, although heavily committed with NYC investigations of varied sorts, dropped everything on short notice to navigate me through our visit there. The Marine Corps has few better friends than he.

And one last caveat: the PAO Ellen Crown would be hard to replace for that post. Ellen met Tom and me, and Corps Stories mission to reveal the best in our Marines, right at the starting gate. She efficiently powered us through several angles, interviews and considerations to make this piece come together for a strong finish. Bravo, Ellen.

So, beloved readers, keep these wounded – and those who care for them – in your prayers.