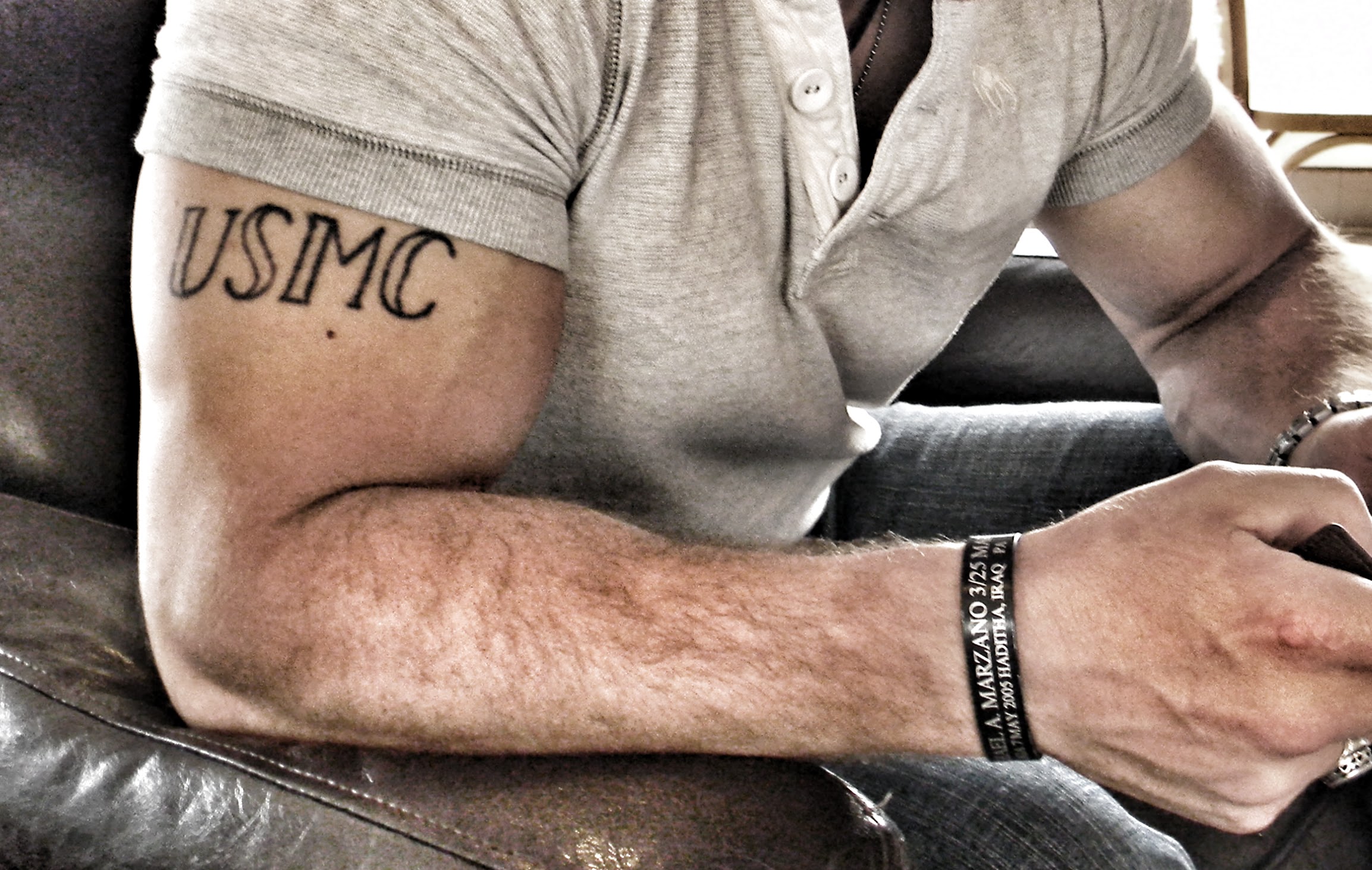 JS wearing bracelet remembering one of his four fallen MAP 7 Marines, Michael Marzano.
He changes them every Sunday.

Every awful obstacle humanity can be dealt, Lt. Jeff Schuller seems to have overcome.

Not with Hollywood style, he doesn’t have a million-dollar smile or tremendous finesse.

for conspicuous gallantry and intrepidity in action against the enemy

But storm after raging storm are weathered by his humility and humor, down-home sensibility and primarily a respect for divine grace.

When I wrote about him eight years ago I prayed that would be the last time I’d see him. Covering Corps Stories Special Assignment on LCpl. Lance Graham gave me a taste of a plane of humanity way above my spiritual capacity, where angels go to hell to keep hell from coming to us.

I cried for days after meeting Lance’s family and the Marines who survived the Haditha Hospital Ambush that killed him and three others.   I cried after meeting Schuller in Quantico a few weeks later.  I cried from then till the day the story ran, Marine Birthday 2006. 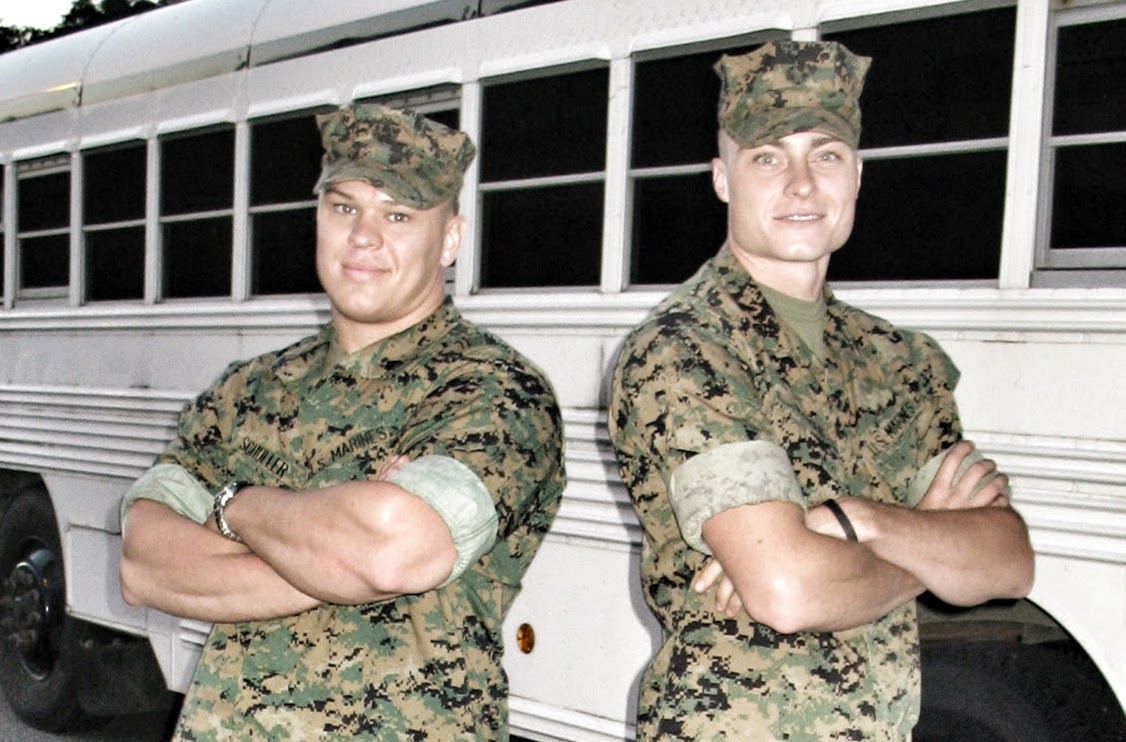 While conducting a reinforcement mission

Dozens of feature news stories, interviews and assignments later I have a new perspective. So does the entire country.

They are better than the rest of us. The Global War on Terror has united national support for our troops – we know and revere our medal recipients.

Instantly, eleven of sixteen Marines were killed or wounded 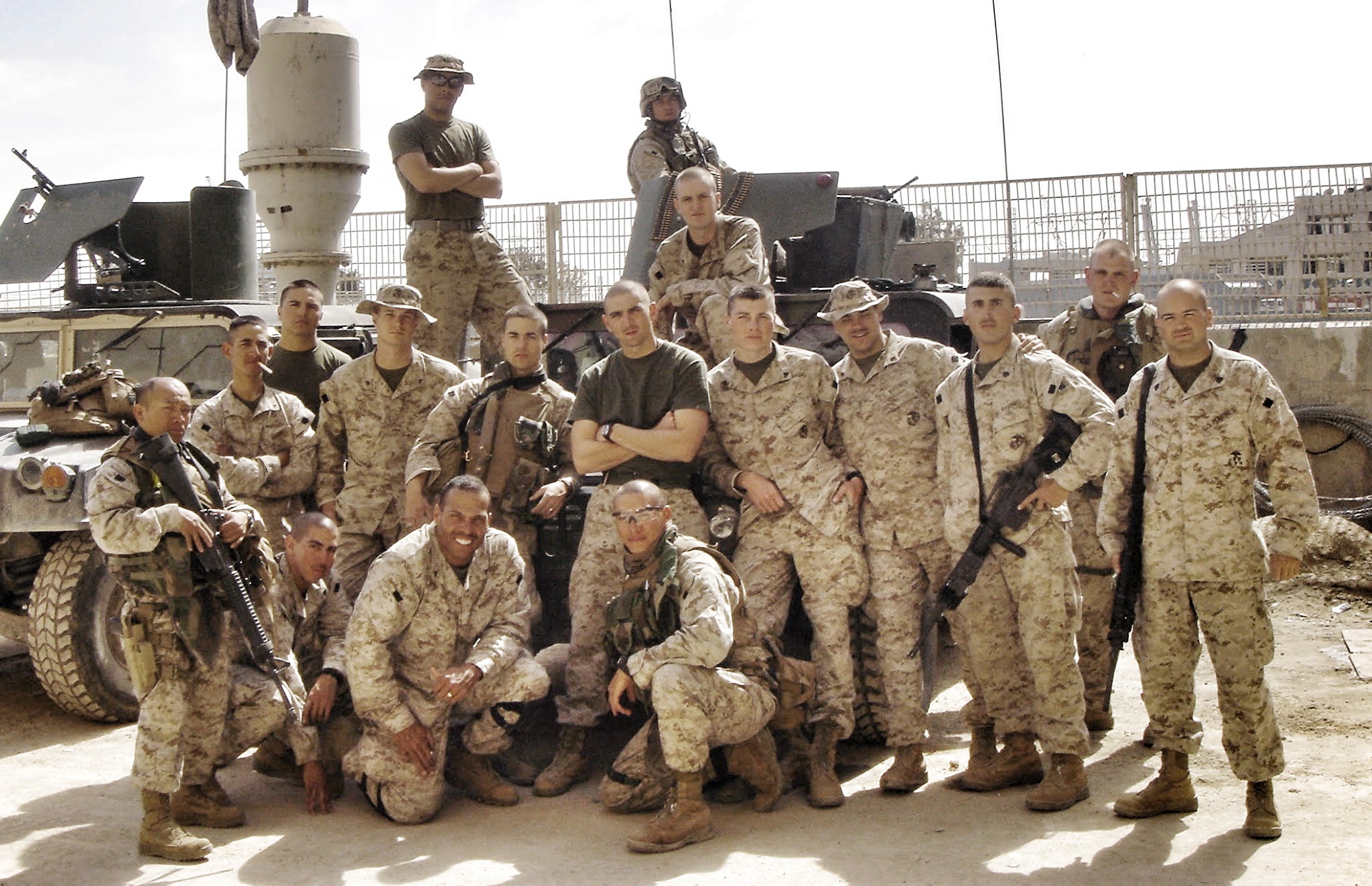 The travels of those Marine’s lives and mine are far and wide. Yet in an Internet age via social media they are a part of my daily life.

But not Schuller. He wants more privacy than many – and that is the least he is entitled to. He is also entitled to find journalists trustworthy.

So when those two ends met and this journalist was allowed to give a 2014 glimpse of “Schullerville”, (as Lance’s father refers to the lieutenant’s unique perspective) thrill ensued. It’s not winning a nine-digit lottery, yet not a far second.

Under intense fire, he alternated his fires between enemy positions and suppressed the enemy for nearly 40 minutes

Rain threatened our Elizabeth City, NC rendezvous; him from the south and on two wheels.“Relax. I’ve got a brand new rear tire and I’ve done this once or twice before.” Right.

I couldn’t relax, I couldn’t find my spot despite the most laid-back coffee house atmosphere. I listened for loud pipes.   Soon the door opened and in walked a third-generation legacy.  “I still have factory pipes, Meriwether,” he said with a grin.  Marine, evolved.

He had deployed again in late 2008 for seven months with 2/25 to a much quieter Iraq.  Not that he knew some level of peace awaited.

“Worst flight ever.  Probably one of the hardest things I’ve ever done.”  Sergeants and above were seated in first class from New York to Germany, still not easing his very realistic fears. “I went around taking pictures of everyone.”

He earned a Bachelor’s degree from Cleveland State in 2010, representing via the wrestling team, having double-majored criminology and sociology and minoring in Middle Eastern studies.

All shared after stirring his press pot coffee with a pocket knife which has accompanied him on three deployments and every season in between, including Officer Candidate School. 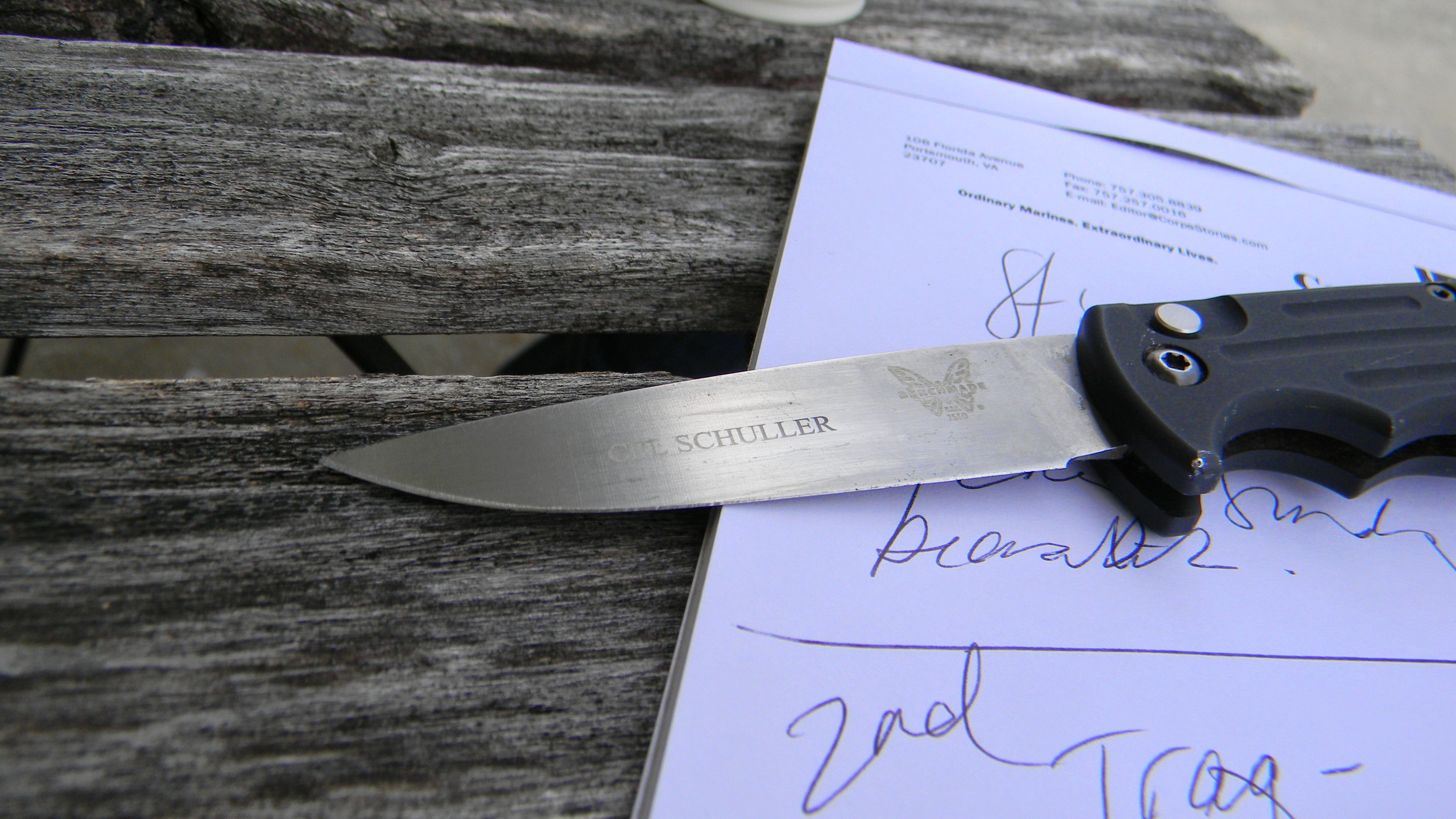 Now 34, he is leaner, more engaged, and speaks in quieter tones.  But some things don’t change.  The fire in his eyes lit up the way it had over lunch in a little Q-Town restaurant so long ago.

“We’d all be dead, if it weren’t for Kalinowski,” he whispered.

“Talk about my faith in God? I had blind faith that the ammo’d keep coming.”

Holding his position, Corporal Schuller expended ordnance of every type aboard his vehicle

But LCpl. Marcus Kalinowski was never awarded for his actions.

Brothers from other mothers Schuller and then Cpl. Stanley Mayer – just 10 weeks after the ambush – sent up a perfectly-written package.

Excerpts from the Kalinowski award package submitted by Schuller and Mayer. 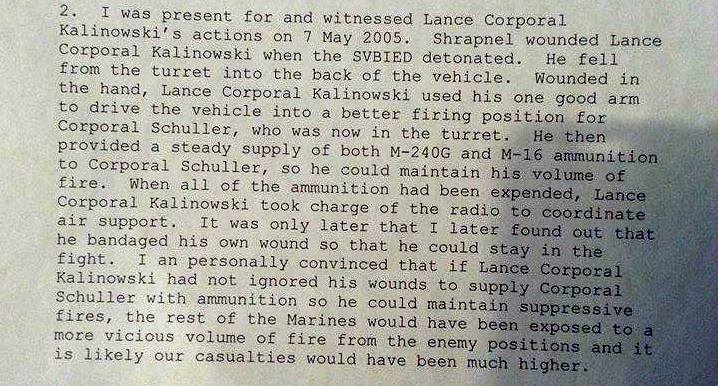 So of all the things Schuller could focus on, could share, eight years of events to discuss and confide, the storm that continues in his heart, in his mind?  Kalinowski.

Bouncing it out privately to Mayer and Brady late that night I learn it burns in them, too – and not surprised Schuller hadn’t let it go.

“With regard to an overwhelming blind spot, while backing up the Humvee, Mark from the turret would guide me by voice throughout the tour.

Never failed, every time we’d get hit by that roadside madness the man would slump over like he was dead.

I’d be in the driver’s seat punching him in the ass yelling at him to roger up and let me know he was okay.

Half a minute later, usually still enveloped by a cloud of dust and smoke, mark would say “whammy” or “I’m good” or something remarkably lame to come from the lips of a dead guy.

That was this man’s indomitable sense of humor. Aggravating as hell, but hilarious.

He didn’t know when to stop. I’ll say not knowing when to stop was one of his greatest traits as a man.

In May, Mark didn’t stop either. One good arm, still in the fight. That’s manshit, like no-shit-real-Marine-warrior-shit.

No Mark, probably no Stan, or any of us, and certainly no Silver Star for Jeffrey, the insurgents would have won the day.

Jeff’s appetite to smoke every bad guy on that killing field was fed from below, where a one armed Kalinowski gathered and prepped cans of ammo, inserted fresh magazines into the rifles for Jeff to use as the belt-fed ran dry.

Mark was the one pushing that ammo up, bleeding all over the place, paying no attention to his wounds, keeping that gun up.

Define selfless service above and beyond what is expected.

Maybe I should run a copy of Webster’s over to the USMC awards board. They’d be shocked, I’m sure of it.

Mark and Jeff were a team, that’s how a machine gun works, it’s a team effort.

The hero of the day was that team, not one individual.

It’s overwhelming to consider the variables. How close we all were to being committed only to the memories of hearts on that day.

I’ll venture to say that of all those variables, if it weren’t for Mark’s inability to know when to stop, I wouldn’t be writing about him today.“

As one of the top ten interviews of my writing career came to a close, the clouds that had parted reappeared. He offered a lot of prayer, kept a few secrets, and tender bear hugs.

Clear sky for the first while of his way home.

At the casualty collection vehicle, Corporal Schuller redistributed ammunition and continued to attack enemy positions as he accounted for wounded Marines and sensitive gear.

But then downpours reigned in, ones that exhausted him, and drowned his phone.

He then mounted the casualty vehicle and continued to engage the enemy from the passenger seat as it traveled through the city back to friendly lines.

He considered stopping for the night.

By his undaunted courage, personal initiative, and complete devotion to duty, Corporal Schuller reflected great credit upon himself and upheld the highest traditions of the Marine Corps and the United States Naval Service.

Instead, he pressed on.

Not worried about that storm.  JS Elizabeth City NC June 2014 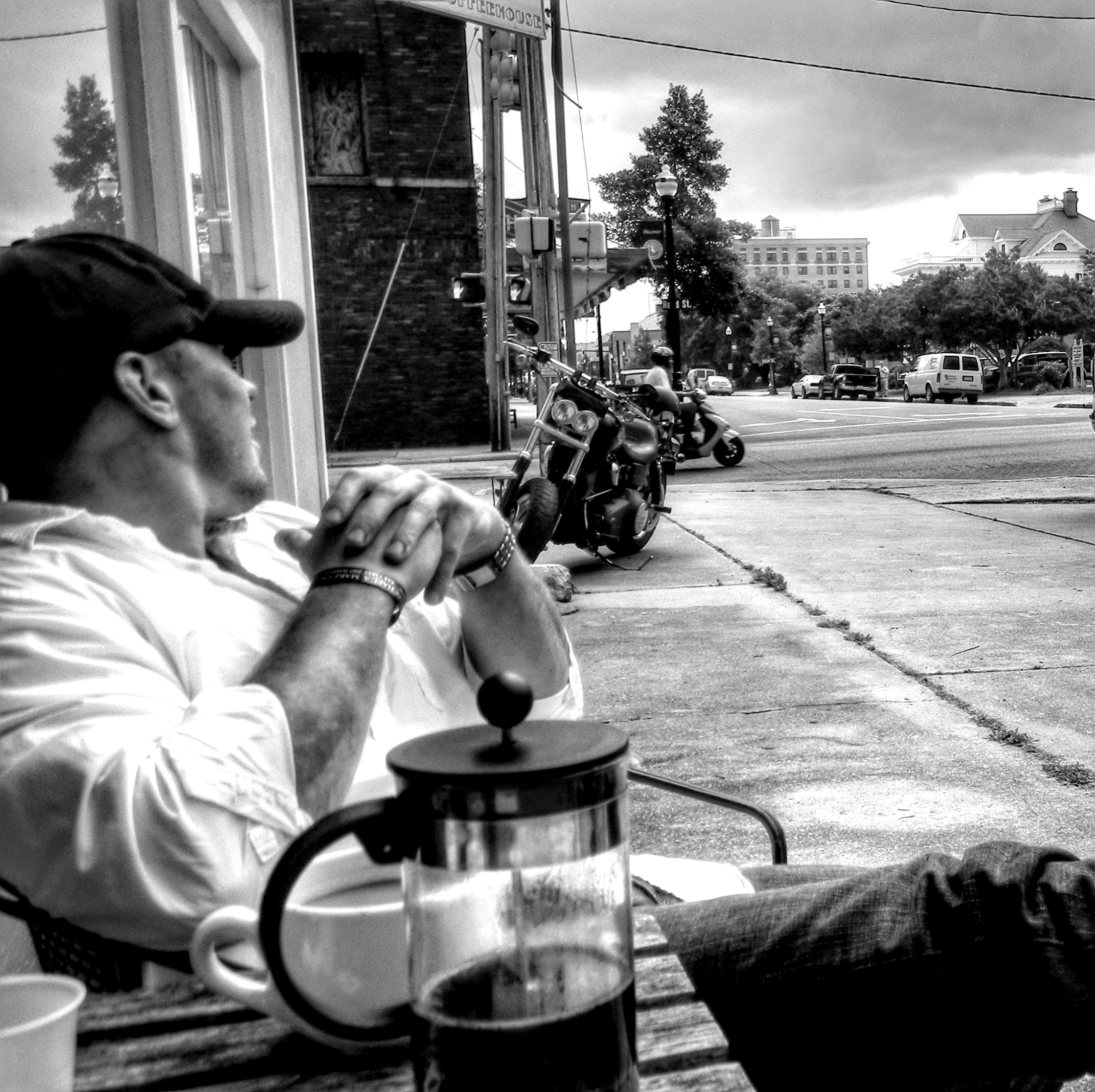 Special thanks to Stan Mayer, Michael Brady – and especially Mark Kalinowski – for thier invaluable contribution to this story. MB