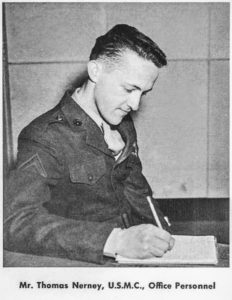 The epitaph of a Roman General, Sulla, who lived and died 2100 years ago, applied perfectly to the life of a New York City Marine who left this life unexpectedly six weeks ago.

No greater friend, no worse enemy. 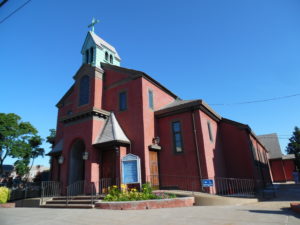 Thomas D. Nerney was born and raised in New York. He served his city as a highly decorated and respected Major Case Squad NYPD Detective, an expert in the investigation of police officer and veteran’s deaths.

Yet just before his life as police officer, Tom had begun his service to his Marine Corps. That only ended upon his heartbreakingly unexpected death. Truth is, that is also the case with his NYPD service as well.

Having retired from police department nearly 15 years prior, one would expect his funeral to occur quietly, without much attention or passion. Ah, another excellent example of his beautiful contradictory life.

Considering the throngs of police officers, Marines, parish and community members, and friends who gathered for a reverent funeral Mass at Sacred Heart Catholic Church on a beautiful June morning, love for this warrior was bountiful. Many, many tears were shed. Hardened officers’ eyes shone with restrained grief.

This church is where he not only celebrated Mass most of his life, but where he ushered every eight a.m. Sunday service for decades, and where he sat in the back pew before every such service and prayed the entire Hail Mary.

They had known him to bring down terrorizing miscreants. To talk down those filled with anguish and despair. To ferociously protect the harmed. To grant respite to the unwell.

Perhaps, though, what these devoted mourners knew most about this Marine, this Servant, was his profound humility.

Each attendee had their own experience of Tom’s gracious giving to their life – and each became aware he had given just as much to another, and another, without drawing attention to his generosity of time and spirit to others in need.

He was the soul of discretion, never revealing the plights and struggles of those in his beloved Marine or police circle of loved ones.

The night before his death – as with almost every other day of his life – he was the picture of health. He had dinner with his longtime friend Ernie Naspretto, and shared he had finally reached the weight he’d been when he graduated from the police academy.

He sent emails before bed late that night, biding “night night” to his closest loved ones, as usual.

At eight the next morning he called Ernie saying he had chest pains and was on his way to the closest hospital. Ernie rushed to the ER, and by then Tom was gone.

In the breathtaking sanctuary of the historic brick church, a eulogy was delivered by a young man, but not just any young man.

Detective McDonald was shot three times by a suspect in 1986 leaving him a quadriplegic requiring a ventilator, whose wife Patricia was pregnant with Conor at the time of the shooting.

As Patricia, who is now in her tenth year as mayor of Malverne, Long Island, sat in a front pew, her son described how Tom came into their lives immediately after the shooting. He became a fixture in their family, as an aid in any way possible.

Conor grew up with Tom telling him children-appropriate tales of catching bad guys and winning battles. He filled in when Steven’s round-the-clock care workers were unable to make it, or any other need arose.

Tom was soon to marry – for the first time. He had reconnected with a childhood friend, Pat, and she is as warm, focused, genuine and plain-spoken as Tom had been; they were a perfect match.

This particular fact of his life’s end was bittersweet for Tom’s loved ones. So delighted he had found true love, and so heartbroken he was only able to live it for one beautiful year. 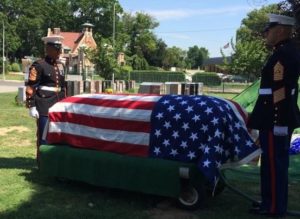 Because of his loyalty and discretion, one quickly realized that while Tom was their dear friend, whom they could count on at a moment’s notice, he was this to another, and another, and dozens more. Your editor’s story may help illustrate.

At the time of his death, I had known Tom almost exactly 15 years. In 2002 a fellow Marine and NYPD officer, Det. Alex Kitsakos, NYPD suggested I write about him for my then-new feature news publication about unsung USMC heroes. That story depicts my perception of Tom then, and my perception never changed.

Tom had the manner of a nobleman. He was calm and displayed outstanding manners. He was charming, and could converse with one from any walk of life. His appearance was never without attention to detail, perfect tailoring, grooming and suit for occasion. This was more than the Corps or even his mother bestowed; he has that very unusual trait which is only borne into a person, true class.

Because CorpsStories would follow the lives of Marines in all types of circumstances, your editor understood a writer must be welcomed and demonstrate great respect of such. There arose occasions when it best someone accompanied for the most important interview missions, Special Assignments.

Tom Nerney was the only suitable candidate to accompany; there would never be a worry of decorum meeting this nation’s highest level of rank, authority or celebrity with him as project partner.

He accompanied me to National Military Medical Center Bethesda, to write about our Marine Liaisons. To the shores of New Jersey to visit USMC Artist in Residence Col. Charles Waterhouse. To a high rise in Manhattan to write about the USMC Public Affairs Officer, Maj. Dave Andersen. He assisted all we mourners during the Quantico National Cemetery funeral of USMC writer Maj. Gene Duncan. And earlier covering when Maj. Duncan and other notable USMC retirees visited Ground Zero for the first time post-9/11.

He never wanted to be part of the story; he wanted these Marines to shine. But he gave outstanding counsel as to how best to tell their story. He was an emissary between me, a Navy Reserve and Associated Press correspondent journalist, and these important Marines. His value to these assignments was immeasurable. His value to this publication was immeasurable.