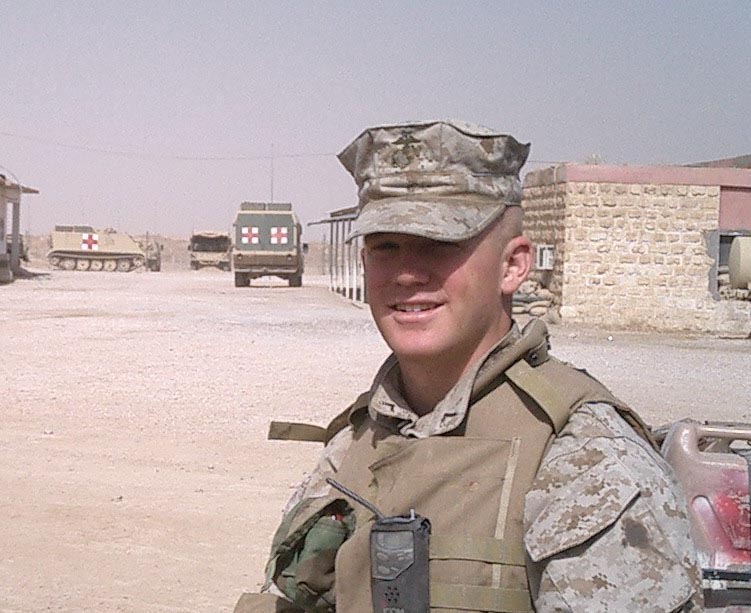 IRAQ, April 2004: “Ramadi, 30 miles west of the embattled city of Fallujah, has been a baptism by fire for many of the roughly 400 from two companies who are serving their first combat mission,” wrote embedded Philadelphia Inquirer photojournalist David Swanson in one of a series of excellent articles from that fateful week in Marine Corps history. Marines he interviewed, those struggling with the loss of the first many – would soon also fall. In the end, 34 Marines were killed.

Those 2nd Battalion 4th Marine warriors experienced the hell that is ambushed, by a few thousand urban insurgents. Cpl. Nick Kelly recently gave a recounting not often found in the media: his six hours on the tight-wire between life and death. With the wisdom of a much older man, he’s counting his blessings.

Cpl. Kelly fought alone from his turret for several hours, taking fire from all sides. He stopped once: with the help of LCpl. Blake Pepper, he left armor to help lift fallen Marine PFC Deryk Hallal onto a body collection truck.

How he stayed focused: “Me being up in the turret – to keep my machine gun operable and on target.  I just remember being terrified,” Kelly said

Only 20 at the time of the ambush, Cpl. Kelly struggles to find words at times. Despite his youth, those happenings have been processed on a very mature level. “I didn’t think of God. I thought of my girlfriend, my brothers. I felt like my body would lock up but I would think of how I wanted to see them again.”

Leadership
Kelly would say that his ability to respond effectively that day was due to the leadership of fallen Marine Sgt. Kenneth Conde. Conde was wounded in that ambush but feircely refused being removed from the front. He died a few months later when his vehicle hit an improvised explosive device. Honoring him, both Nick Kelly and his brother Ryan have a tatoo also worn by Conde, “Ride or Die,” inscribed across their backs.

Cpl. Kelly wanted to focus his discussion on Conde – and his impact on those he led. “He’d teach us military tactics he would make sure everybody understood.  He would stay longer if we needed help. He was a real dedicated teacher.”

The Conde family came to a memorial service held at Camp Pendleton, CA early this year, at which Kelly was able to meet his family. He reports that following the service his platoon went to dinner with the Conde  family. “He had an older brother of two younger sisters. He never told us that he had two sisters. I saw pictures of him growing up,” he said pausing, “I only knew him as a sergeant. Very professional, I never saw ‘Kenneth Conde’.”

Life After
Cpl. Kelly is a faith-filled Marine, and one who deeply needs and appreciates the love in his life. “Some people don’t have the love and care I receive,” he said referring to fellow Marines without a loving home state-side. “I think I’m very, very lucky to come back to a family that cares.”

He says he’ll take away a work ethic not often seen or easily obtained. “I can operate on little sleep.  Working under heavy stress would improve me for the rest of my life.”

He easily carries on the proud Marine tradition of his family, yet his courage and fortitude came with a price.  His father Bruce, is a retired Lt. Col. His older brother Donovan, is in Marine flight training presently, and his twin brother Ryan, has just enlisted after finishing two years of college. Nick’s uncle, Keith Kelly, is a retired Marine infantry officer. Nick also has an older sister, Brianne, who is married to an Air Force officer.

No influence like a father though: “My father talks to me. Lets me know everything is all right. Comforts me emotionally.

(Editor’s note: Special thanks to Lt. Col. Gregg Lyon for his invaluable contribution to this story.)