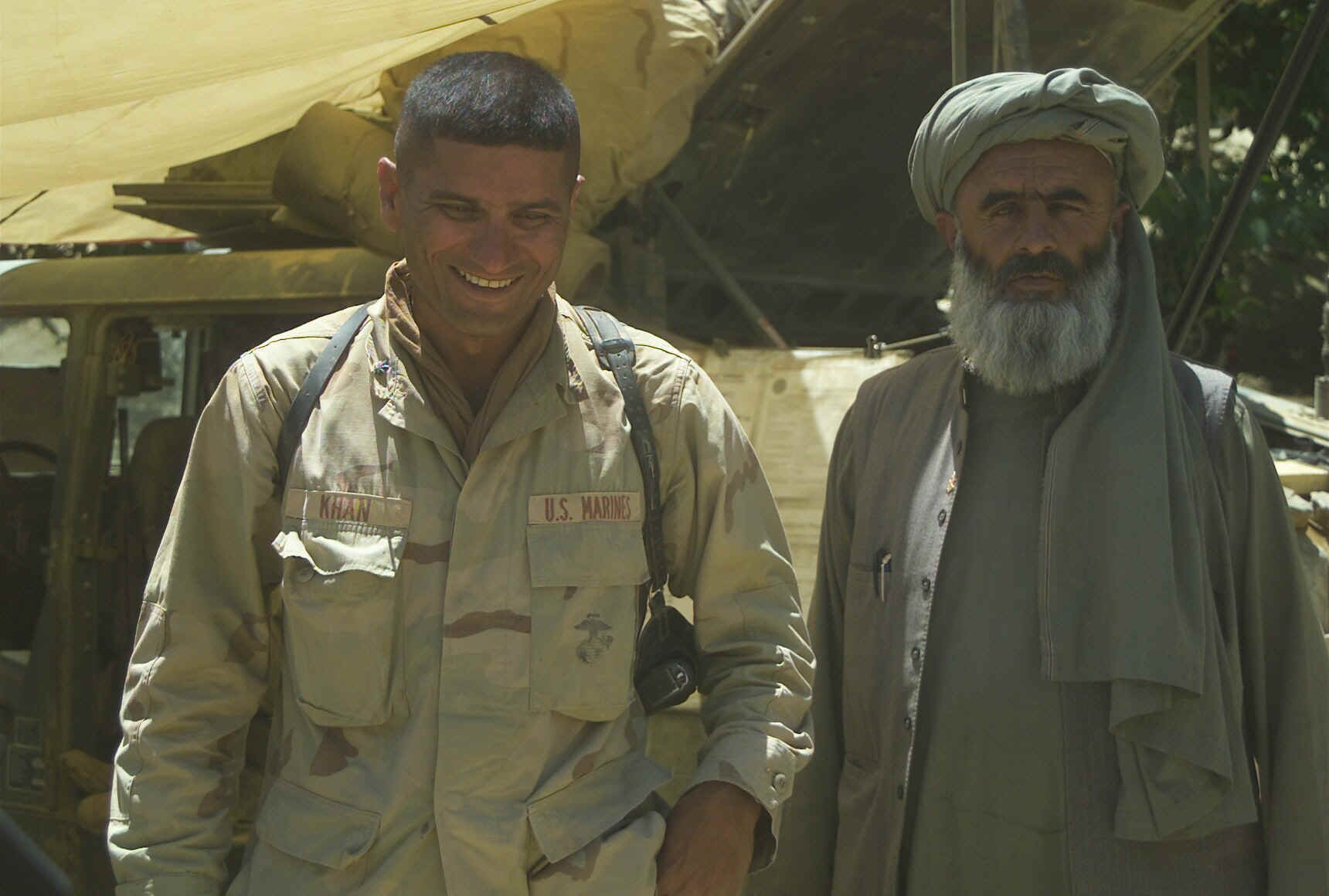 LtCol. Asad Khan has a mind for business – the business of winning battles. The profit is the mission success and Marines surviving. The business strategy is great training and careful negotiations.

“I’ve just been at the pinnacle of my job.” His immensely successful mission in Afghanistan several months ago allowed him that great profit margin of 100 percent battle victory.

His motivation was validated by his actions in Afghanistan: “To create opportunity for the disenfranchised and impoverished around the world.”

During interviews, Khan stressed the importance of seeing issues from both sides, and of building communication between cultures and civilizations.  “Ultimately that’s how we’re going to win this war,” he said.

As a native of Pakistan, this American leader was comfortable in terrain which was completely unfamiliar to many U.S. born Americans. Having fluency in local languages including Urdu and Pashtu, and speaking some Arabic, the colonel brought a needed knowledge and experience to a rather harsh negotiating environment.

However, he knew the guarantee of success lay in the condition of his Marines.

“It takes a year to build an infantry Marine.”

When Khan took over the unit he brought to Afghanistan, things weren’t good – as his Marines were hardly prepared for warfare.

Khan sought extensive financial latitude in providing the training they needed. To do this he needed to persuade the check-signers of the need for far more than average training, including bringing flag officers to the training field to exhibit the poor state of affairs. “I wasn’t afraid to show them our warts,” he recalled.

Training that was budgeted for $800,000, consumed over $4.2 million. Khan knew he was pushing the limits of his latitude, and that he would not be able to prove it as wise investment until the mission was complete. It was a big risk. But Khan wouldn’t consider any other option.

He wanted them in top form. During pre-deployment training, Khan’s level of demand was so high that he expected his Marines to garrison, or deal with inspection, on a daily basis – throughout months of training.

Khan anticipated what his Marines couldn’t: that their mission would take them three months and 3,000 miles away from hot meals or showers. That their mission would require that they be motivated and physically conditioned to withstand zero creature comforts and ongoing conflict for weeks and weeks and weeks. That intense pressure during training would result in stamina for events – events they would relish the rest of their lives.

When one considers the challenges the colonel absorbed, the basics would be serious matters: everything from water to auto parts.

Obtaining drinking water for his Marines was tricky. He didn’t want his Marines to carry more than one day’s needs, about 7 quarts, as they were scaling high elevations which demanded tremendous physical fortitude. “I never really mastered that,” he said. He had it trucked in and flown in via helo drop.

He also had parts flown in for the Toyota Hi-Lux’s used in their convoys.

Realizing the weight burden of flak jackets in extreme terrain, Khan worked with a local “entrepreneur,” whose tailoring skills allowed for a battlefield redesign of the protective vests, named “sapi plate holders.”

That businessman traveled to Pakistan for the appropriate fabric and delivered completed gear within 3 weeks.  Khan paid $20 each for 1,200 of the lightweight gear. Yet another effective business relationship.

Even his control of enemy territory allowed for negotiation:

Upon one raid seeking the enemy at a textile factory, the colonel told the makeshift guard unit there, “I’m going to start firing in five minutes.”

He walked back to his Marines and waited. “Three and a half minutes later they cleared the way,” for his Marines to enter.

Ultimately, his Marines learned the difference between the blameless and the foe and took personal interest in helping – especially the children. His Marine’s families sent gifts from home just for the Afghan children and their schools.

One aspect of warfare is knowing that those who’ve suffered the most at the hands of the enemy may appear very similar to the enemy themselves. It’s not an easy job to enhance a Marine unit’s adeptness with local assets, but Khan was determined to do just that by sorting out who was who.

Local Afghans who had been persecuted by the Taliban and their fighters, provided resources and information that just weren’t available on American training grounds. Khan enlisted a militia of over 200 Afghans. He then sought relations with the village elders of the areas they fought through.

He paid these militia members cash on the barrelhead: $5 a day for their duty, $10 per firefight, $20 for finding a land mine. In a land where the dollar is many hundred times more valuable than stateside, the colonel was a reliable employer.

He insisted on paying these men “right then,” and carrying enough cash to do business ethically, not promising to pay them later.

Although Khan’s experience of Islam has been as an American, he understood these elders were trying hard to hang on to the truth of the Koran, not versions pushed by extremists. Despite their varying backgrounds, Khan sympathized immensely with their experiences.

The colonel met the religious needs of his Islamic militia members by actually flying in special bread required of their faith, and daily he supplied them with a lamb or goat for the slaughter, and he reiterates respect for the Afghan women, “we had women Marines with us to search the females as a sign of respecting and understanding religious and cultural imperatives.”

He said there is an, “Importance of respecting other religions so you can communicate with them.”