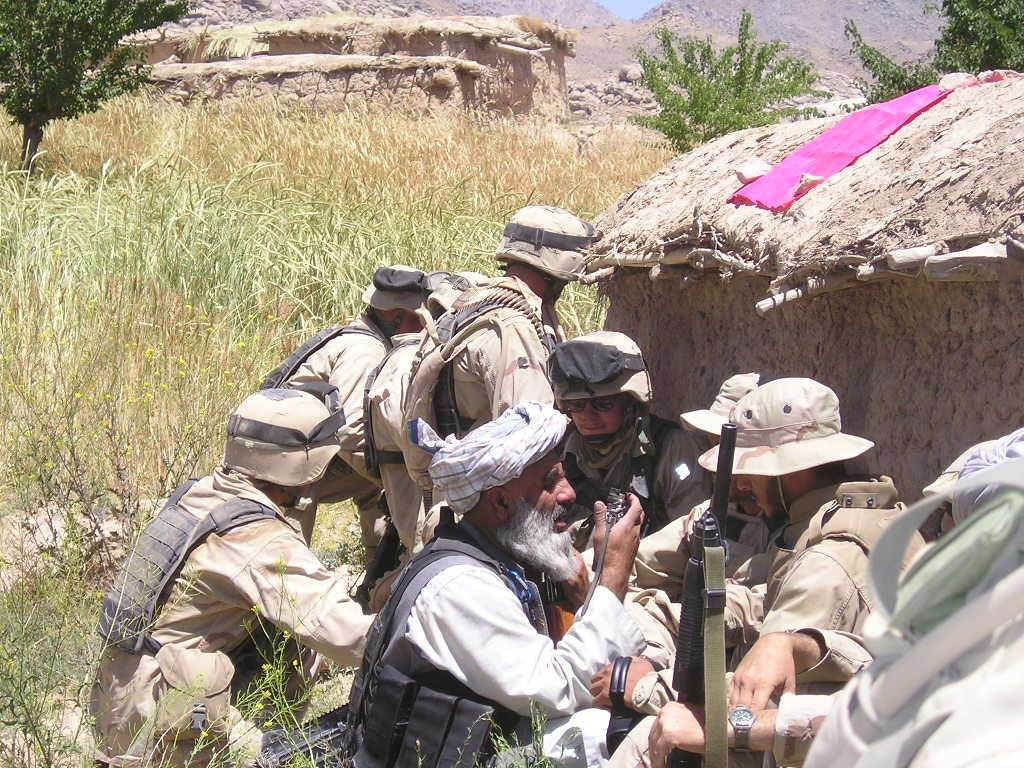 “Our most precious asset is our Marines.” Yes, it’s a platitude. Yes, no editor would want that quote to run. Unless a commander proved this was his personal philosophy by years of pre-war preparation.

So, as LtCol Asad Khan made his way through time and rank, his plan for war considered that thinking carefully.

Of course, an officer wants to win every battle, finish every engagement with the enemy. And that’s what we stateside want as well.

And Marines are going to die. That’s war. We stateside accept that as well.

But is there a point of departure from commander to rank and file? Is there some place in the mind of a commander where he justifies not going to the front line to engage? Shouldn’t every commander be willing to show their Marines how to lead, not simply tell them? Could it make a difference in how many young Marines die in battle?

“I fought with these Marines shoulder to shoulder.” Literally, not rhetorically.

His heart is best illustrated by the complexity and aggressiveness of his plan for warfare. He calls it, “Focus on the Fundamentals”, and uses a find, fix and finish approach.

And while they may seem like complex philosophies, recall from whence they’re borne: He stood before 3,000 family members and said, “I’m bringing everybody back.” He meant it.

Their minds relied upon their bodies. Khan demanded twice daily physical training for all of his Marines, himself included – even crossing the Atlantic enroute to their mission. And the colonel took due pleasure in radio transmissions indicating the enemy wasn’t expecting a BLT at 9,500 feet. Khan’s term: “Physical fitness equate to mental toughness.”

Firing as natural as breathing. Weapons training from pre-deployment to mission prep at Kanhahar. In squads, in platoons, in companies. During the day, during the night. While on ground, and while embarked. Using over 250 percent of the ammunition they were initially allowed. Khan’s term: “Weapons Proficiency.”  Possibly an understatement.

Let the youth have their day. His senior enlisted Marines taught the junior enlisted the Infantry Squad Leader’s Course, when ideal scheduling wasn’t available. Khan knew they could and would be courageous fighters in small numbers. They would respond to points of failure, friction and transition.  Khan’s term: “Small Unit Leadership.”

Share the glory. The infantry Marine is a powerful weapon. But combine him with some airborne guns, and success is imminent. His Marines trained in the complexities of cooperating with firepower from the sky, including training junior Marines on Close Air Support. Khan’s term: “Focus on Combined Arms.”

Keep everything running. Khan focused extensively on ensuring equipment maintenance. His Marines learned to operate, repair and retrofit their equipment and vehicles, even under combat conditions. Khan’s term: “Expeditionary Logistics.”

Keep talking. Communications equipment on Marines and vehicles throughout all parts and parcels of the battlefield was essential to Khan’s plan. Even a great commander can’t be all places at all times so with radios everywhere he could influence the battle in the middle of the fight. Khan’s term: “Command and Control.”

Attract and annihilate. Moving around in broad daylight attracted the enemy to Khan’s forces. Maybe the enemy wasn’t quite aware that that small group of Marines wasn’t all they would be up against. Mobile reinforcements then massed against, and victory was assured. Khan’s term: “Winning the Tactical Fight, Always.”

Love the innocent. Displaying respectfulness and integrity with local Afghans was critical to Khan’s strategy and success. Knowing the cultural hierarchy allowed him respect who they respected, and help them meet their needs. Khan’s term: “Integrated Civil Affairs.”

“I wish that I was there the night Cpl Payne was killed. I would have gladly laid my life down for his.” Khan was onboard one of the last planes out of Afghanistan. When the hatch closed, he shielded his face with his hands and cried his heart out, knowing that despite the great success of the unit in battle, he had personally failed by not bringing all his Marines home.

Some Marines influenced Khan immensely. SSgt. Vigiani, “inspired me and the Marines around him.” He received the Navy Cross:

“Most engagements with the enemy began as meeting engagements or ambushes that required the small unit leaders to respond aggressively.

“In the most notable example, when his Marines were pinned down and wounded by heavy enemy fire, one of our squad leaders did exactly what we expect our NCOs to do — he exposed himself to the enemy’s fire, maneuvered against the enemy’s position, and killed them by dropping a hand grenade into the position.  He was wounded in the process, but refused evacuation, and continued to lead his squad in the assault up a mountain against the enemy.”

Khan was born in Pakistan and moved with his family to the U.S. when he was 12. Those youthful years gave him just the experience he would need on this mission. He knew to respect the village elder for his wisdom and his influence. Khan sought to communicate with that leader at every opportunity, to build trust and understand need.

Khan knew that the women of that culture required immense respect and privacy, and that their loved ones demanded it for them. Searching innocents for weapons is a necessary evil of war but Khan was considerate and deliberate. He used only female body searchers out of respect for the Afghan women, the Afghan men, and their culture.

For all of his heart in leadership and his complex, successful plans, being human he certainly had his moments when it was just he and God. He said that while at the front, at the highest elevation of nearly 10,000 feet, “No one has a clue what was going on in my mind.”

Concluding, leading from the front is optional. But not for Asad Khan.

Why? Why take these risks? What happened that you would take on fights that could kill you and the Lance Corporal?  What caused you care so passionately for them?

Finally, after nearly eight hours of interviews, the Colonel made the connection between his mind for battle and his heart for the love of those who would die for we Americans.

“The birth of my children.” His three, Caleb, Jessica and Syra, awakened the effective warrior.

These 1,197 apparently are also his children.

“I told them, they will be my Marines till they day they die.”