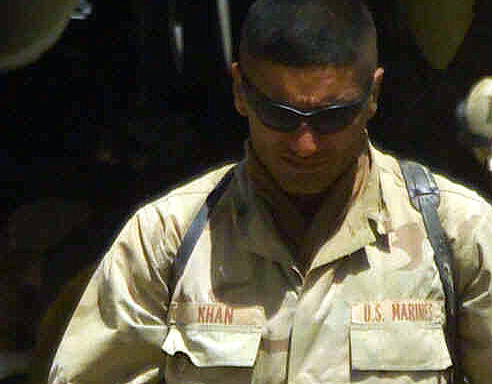 Marine LtCol Asad Khan is a simple man, but one willing to undertake complicated strategies to keep his Marines successful and alive. This is the first of a three-part series on the commander who led a magnificent series of battles in Afghanistan in 2004. Research and discussion demanded this faith-filled Muslim man be carefully revealed.

Strikingly he has two facets, one a nearly unexplained level of passion for his Marines, and two an unlikely implementation of his Babson business school model: winning battles via commerce considerations.

His career has been spent seeking the ways of victory, but at some point he threw the book out and followed his heart to no fratricide and one fatality. That’s the brilliance of God’s work through Asad Khan.

The Blood of Asad Khan (second part) is the story of what pumps through the Colonel’s heart, what runs through his veins and what motivates the passionate commander.

The Business of Asad Khan (third part) is the telling of his dossier as a warrior, his calculated pull of 1,197 Marines to the top of the battlefield ladder.

This is the who, what, where, and when: His battalion landing team consisted of 1,197 Marines.  The 1st Battalion, 6th Marine Division. Over 3,000 mountainous, treacherous Afghani miles. April, May, June and July 2004.

They killed 100 enemy. They captured 131 enemy.  They confiscated large weapons and ammunition caches. They initiated over a quarter million dollars in civil affairs projects.

His Marines and their over a hundred vehicles took on the enemy daily – hundreds of miles from the closest forward operating base. Asad Khan, or, “the old man,” fought out front with the lance corporals.

Colonel Khan has been inspired by:  John Archer LeJeune, possibly for his strategic skills. By Holland (Howlin’ Mad) Smith, possibly for his “I’m coming after you,” attitude. By Black Jack Pershing, possibly for his foresight in influencing the enemy. But no one inspired Khan more than those who fought along with him in Afghanistan.

While being nicknamed “Genghis,” must be borne of his ferocity of mission, he certainly lacks the viciousness of that iconic warrior; he loves his Marines far more than Genghis ever would have.