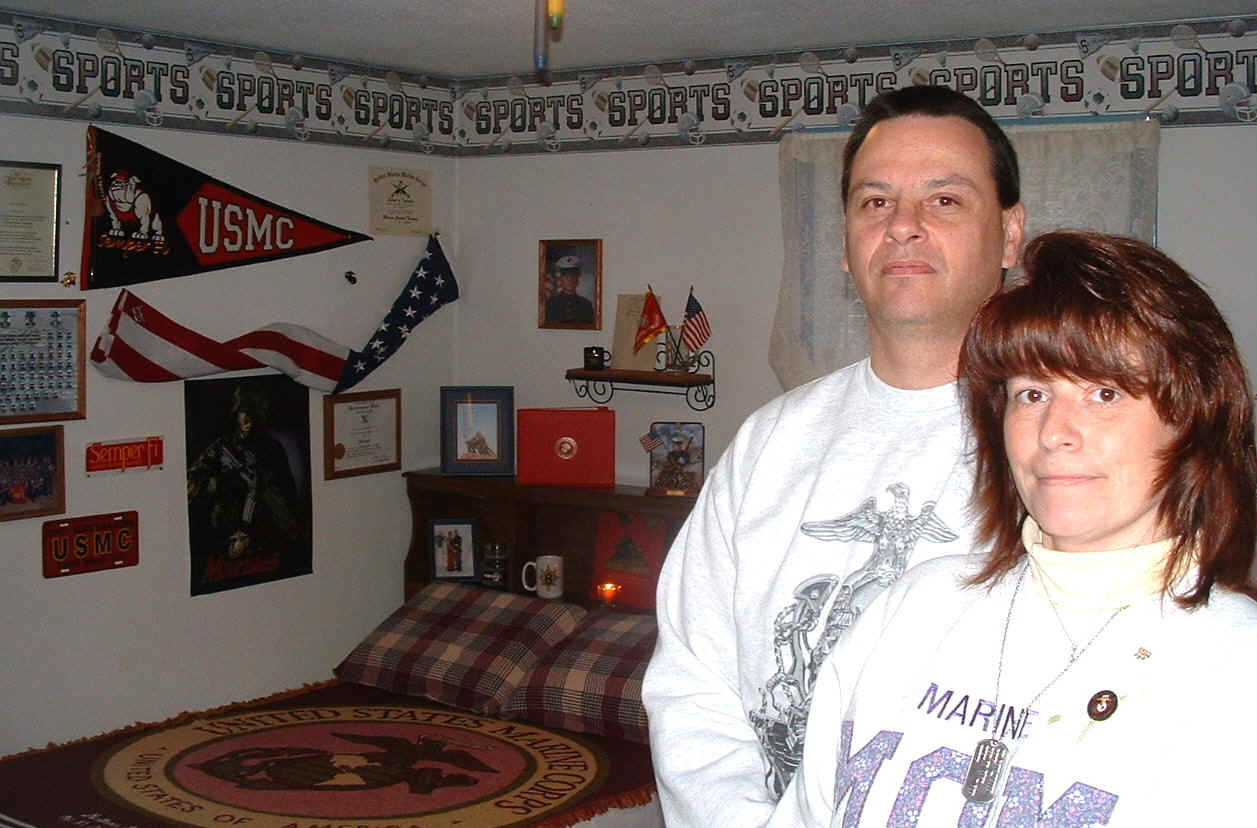 PHOTO: Glenn and Sally Davis in their son Matthew’s room.

TEMPLETON, MA – This Marine’s mom is led by her heart. Sally Davis, with the quiet support of her husband Glenn, are keeping local troops in the eye of their community. With the yellow ribbons she’s places all over town, the candlelight vigil set for Sunday evening in this small town’s common and an upcoming banner at the Country Store, she’s doing what she has to do.

LCpl. Matthew Stewart Davis, 21 is her motive. Although MSNBC journalist Kerry Sanders is embedded with her youngest son’s unit near Nasiriyah, Irag, she has to stay away from the television. It hasn’t been pretty so far. His unit has faced some of the most intense warfare of the liberation effort. “I don’t know if that kid on TV is my kid.”

“As long as my phone doesn’t ring and no one pulls up in my driveway, I’m having a lovely day,” she said Thursday as she held onto the dog tags around her neck, wearing a “Marine Mom, Parris Island, SC” sweatshirt – she and Glenn casting supportive glances for each other.

Sally attended the rally supporting the troops at the Athol Memorial Park the previous Monday. With less than 48 hours preparation the event drew nearly 400 locals.

“I was overwhelmed but I felt so wonderful after I left. I met people who are total strangers who said, ‘God bless your son for protecting us.’”

The difficulty is intensified by the lack of contact. Matthew wrote often before the war started, the Davis’ received their last letter two weeks ago. He writes about life in the dessert, seeing things he never imagined seeing, and, “your warrior son loves you.” Reading this aloud Sally’s eyes fill with tears. “He’s always called me ‘Mom-bo’s.’ I’d give anything to hear him call me that now.”

Growing up Matthew loved to play with G.I. Joe’s and swore he was going to join the Army. But on his way to the Army recruiting office after his 18th birthday, a Marine Corps recruiter apparently suggested another idea.

The actuality of Marine Corps service created hesitancy in Sally, but his seriousness locked it down. “If I’m going to do anything, I’m going to be the best. And by the way Mom, I’m 18.”

Recruiter GySgt. Paul Myers reassured her. “They will take care of him just like you would,” he told her as he sat in their home, “It’s a brotherhood.”

Glenn reports that Matthew has been a hard-charger from youth – a natural leader. “He’s always been the most go-getter I’ve ever seen. He would always stick up for the next guy.” He describes times in high school when Matthew would advocate and defend his friends, even when his own credibility was on the line. “He risked his own reputation,” defending his friends, a proud dad continued.

“He expect to play Tiger Woods,” Glenn brags about his son’s penchant for golf. “I’ve seen him hit a 358 yard drive. He’s a left-handed natural golfer. I’d like to see him play on the PGA.”

Glenn and Sally report that he was Marine of the Month two months in a row while at Camp LeJeune, NC, his last duty station before heading to the middle-east.

“I had to let people know that we have to be positive. It’s up to us to support these troops. The President is the President. It’s like our boss at our job. We have to support him weather he’s right or wrong.

“My child is there doing a job for us, and he won’t finish until the end.”