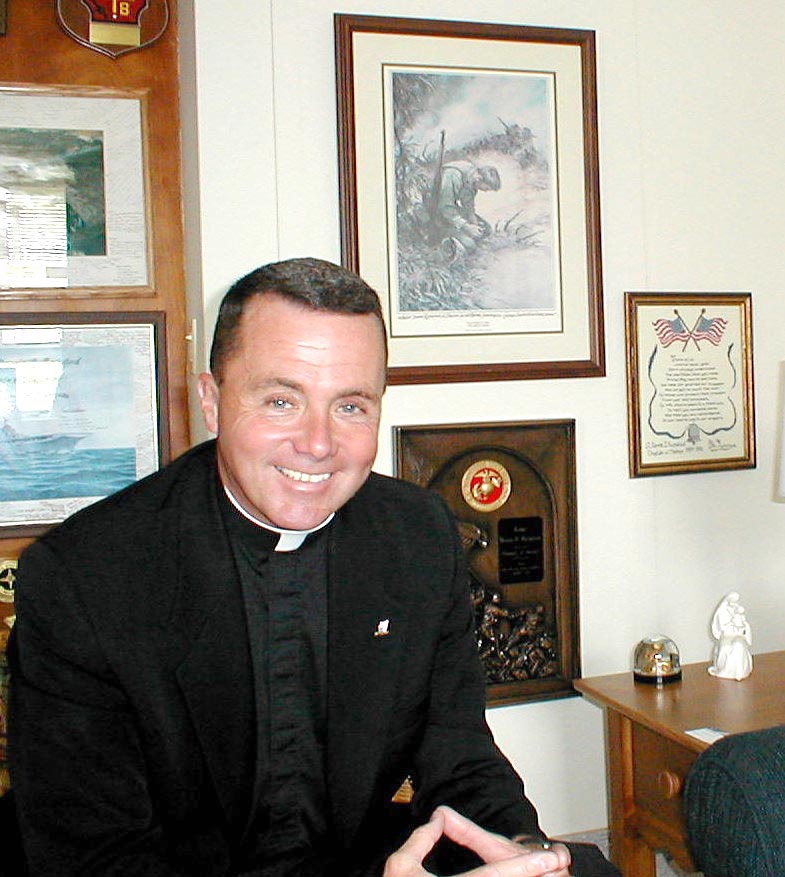 Cmdr. Dennis Rocheford: A Father in the Field

BLACKSTONE, MA – Armed with his faith and his Marine Corps training, Commander Dennis Rocheford (USNR), 53, fights the good fight on more than one front. As Pastor of St. Theresa’s parish in this southern Massachusetts town and Chaplain to the 25th Marine Regiment, Chaplain Rocheford listens carefully to his heart.

After graduating from South High School in Worcester, Massachusetts in 1967, he joined the Marine Corps. “It was the first time I had individually accomplished something. I actually didn’t want to leave Parris Island. By the time those three months were up, you were locked and cocked. There is nothing better than walking across that parade ground, hearing the Marine hymn,” he recalls with a gleam.

Cmdr. Rocheford soon shipped out to Vietnam where he claimed his two purple hearts.

The Commander returned home – but not before facing a moment of truth. He realized he would be soon walking on American soil. He realized the better part of his unit would not be joining him. And at three a.m. on dark bus in Okinawa, Japan in January, Cmdr. Rocheford promised The Father that he wouldn’t waste his life.

“At 19 years old I thought I was invincible, immortal. On January 16, 1969, a lot of my friends were dead or catastrophically injured.”

The system wasn’t working for the well being of our Marines and soldiers, either, he recalls. ‘They sent in replacement troops, which I hope they never do again. Unit identity and integrity is very important. The basic thing of boot camp is if one screws up, everyone pays.”

His return home was no walk in the park either. “The anti-war feeling was so intense. If you wore the uniform as a Marine in Boston or Worcester, you could prepare yourself for scathing verbal attacks.”

After his 1971 discharge, Cmdr. Rocheford began attending the University of Massachusetts in Amherst, where he intended to get a psychology/sociology degree. “Umass was a great blessing to me. I thought we were on the paradigm of a revolution. I wanted to be a social worker.” But another life changing experience was about to occur.

“I made a retreat near the college,” he recalls. At the time he reports he was in love and intimately involved with a woman he met at college. “I was so involved and devoted to the church, she said, ‘have you ever considered becoming a priest?'” Fortuitous, her words were.

Becoming a priest, the Commander would have to part with romance. But true love had not eluded his young life, and he was better for it. “I was seriously involved with someone from my senior year of high school. She was faithful to me while I was in the Corps. To this day I hold her in my heart of hearts.”

Cmdr. Rocheford completed his bachelor’s degree in psychology with a minor in philosophy in just three years. He then attended St. John’s Seminary in Boston, where he was the only veteran in his class of 225.

The Bishop of the Worcester diocese asked Cmdr. Rocheford to get his commission in the Army, serving as a Chaplain. “I said ‘No!'” a bark, actually. “They let me join the Navy Chaplain Corps,” which he joined in 1987. He supported the Marine Corps in this capacity on active duty until 1998 when he went became a reservist.

In his spacious office of the parish rectory, Cmdr. Rocheford’s walls are adorned in the majority with Corps mementos, including a personally autographed painting by Col. Waterhouse. His eyes light up at the memory of his Chaplain days at Parris Island.

“Your D.I. is the paradigm of what you want to be. He seems to be the integrated person, body, mind, soul. Going back, I used to ride hard on the D.I.’s ‘you’re in a phenomenal position to insure they never give up'”. There the Commander also informed the Instructors that they were welcome to worship in the chapel, but not to instruct. “When the recruits were in the chapel, that was my time.” Unfortunately not every Drill Instructor took kindly to changing roles. “The one’s who went toe to toe with me…lost.

“Its something to see 1,400 recruits singing and crying and begging God to help them through their training,” he notes.

So when he goes on 20-mile hikes and runs from fighting hole to fighting hole during exercises, it doesn’t take long for young Marines to realize he was a Marine. “They won’t come to my office but when you’re out there, sweaty and nasty, I tell them that we’re having a mass at 18:30. That’s when you get them,” he says with a smile.

Today two battalions of his local reservist regiment are forward deployed, so he doesn’t spend as much time with Marines. However they’re not far from his heart. “I get calls and emails, ‘Father, do you remember me?’ of course I do, its in my fiber.”

His parishioners keep his sprits buoyant as well. He learned Spanish in Santo Domingo and says masses in Spanish as well as in English. “I have great moments [as a veteran] in my community. I know they’re proud. They don’t say it, but I feel it.”

When a parishioner happens to enter the Corps, Cmdr. Rocheford bring them to the altar, and says a special prayer, the prayer of St. Michael.

Prayer of St. Michael the Archangel, defender of the military:
Saint Michael the Archangel, Defend us in battle; Be our protection against the wickedness and snares of the devil; May God rebuke him, we humbly pray; And do thou, O Prince of the heavenly host, By the power of God, thrust into hell Satan and all evil spirits Who wander though the world for the ruin of souls, Amen.

Cmdr. Rocheford concludes, “I am proud to be a priest and proud now to have served in Vietnam and served in the Marine Corps. I’m grateful to God for the opportunity.”

Editors Note: Special thanks to Lt. Col. Marcela Monahan for her invaluable contribution to this story.