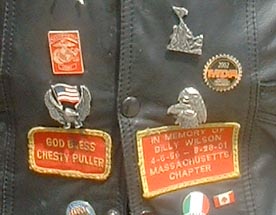 PHOTO: A former Marine displays his pins and patches at a recent veteran’s memorial run.

BOSTON – Some journeys are longer than others, but for Rick Burrill, Sr. the road always takes him to service, whether to his community – or his country.

Today  he’s a weathered 56. “I may look ok on the outside, but I’m falling apart on the inside,” he jokes.

And on the 50th anniversary of the Korean War Armistice, it was plainly apparent that injury and ailment seek Burrill out.

As a few members of the international motorcycle fund-raising organization for which he recruits – the Leathernecks, comprised of former and serving Marines, as well as Fleet Marine Force Navy corpsman – arrived at the Charlestown Navy Yard, Burrill’s bike slammed into the bike ahead of his. His face hit the top edge of the fairing, leaving him on the ground, unconscious and with two facial gashes and a cracked cheekbone.

Someone yelled, “bike down!” and riders came running from all directions. Within seconds Burrill was being attended by two former medics and his 750-pound Vulcan Classic was upright – thanks to the rest.

Soon police, fire and ambulance arrived, Burrill regained consciousness and then took a ride to the local hospital. His fellow Leathernecks performed some roadside surgery rendering his bike running and legal.

But those four years in the Corps still served him: after sitting in the ER waiting room for more than two hours without treatment, he got a ride back to the ceremony in time for closing colors, then rode with his chapter back to the Cape.

Since he took on the role of recruiter four years ago, the organization has grown from 17 members to over 700. there are chapters in Hawaii and Okinawa as well as nearly every continental U. S. state.

He developed and maintains the site, http://www.leathernecksmc-cc.citymax.com  , which he credits (along with other chapter web-sites) their rapid growth, as well as by word of mouth. “Everywhere we go we sign up new members.”

And go they do. Burrill reports that every weekend through the spring, summer and fall months his chapter, as well as most others, are riding in some event. They contribute to each fund raiser from their own pockets, usually $10 – $20 per ride. Sometimes they sponsor cookouts or other feeds for the Brocton Ma. Veterans Hospital spinal cord injury patients.

The only thing required for membership is that the rider be a former or serving active or reserve Marine, or FMF medic.

Burrill’s life has taken a lot of turns. After serving under then Lt. Charles Krulak (former Commandant), he served in the Army and the Coast Guard.

After his military years, Burrill served on police departments in Massachusetts and Florida. He then moved around in profession but ultimately liver disease and diabetes rendered him disabled.

Despite those matters, Burrill’s service to local non-profits and veteran’s organizations comes easily and will so for the apparent future.