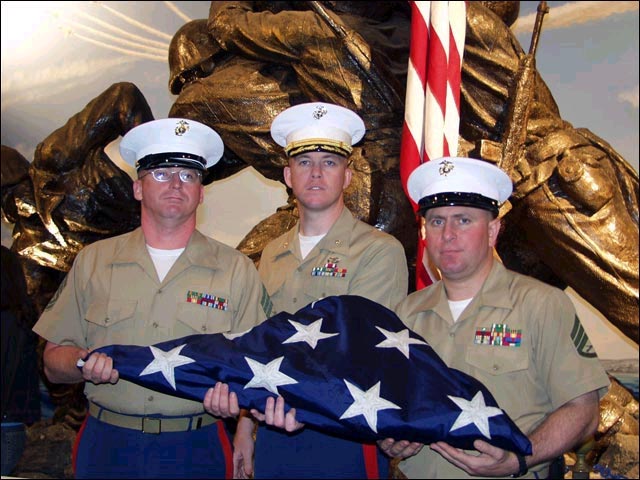 SSgt. Alex Kitsakos: Community in the Heart of this NYPD Marine
April 2003

NEW YORK, NY – It was a balmy, breezy Saturday evening before St. Patrick’s day and SSgt. Alex P. Kitsakos, U.S.M.C.R. was positive and focused. Over dinner at the Beekman Pub – a few blocks from police headquarters and near the recruiting station – he discussed his time with New York’s finest and time with the Corps. The two have melded recently.

As a Marine Corps Public Affairs Office journalist in Manhattan, he’s just come off a three month activation. As a Reservist Liaison/Combat Correspondent he responded to the media for the stepping-off of reserve units from the New York area. This after the time-intensive Toys For Tots campaign.

Insisting he more assisted than led, “It was a pleasure for me to work under the guidance and leadership of acting commanding officer Capt. Jarrett Heil and GySgt Tim McGough.

“As far as switching hats, it was just getting into the mindset of having (since I fell under federal jurisdiction, to focus on things that were happening nationally, and thinking about having to leave New York for an extended period. I was surprised and disappointed that they didn’t have the funding to keep me on longer, but I’m happy to be back with the NYPD recruitment unit.”

During the Gulf War he served in Saudi Arabia.

“I was pretty new to the Marine Corps. I didn’t know a lot of people, I didn’t know what to expect. I just wish that I had had more time in the Corps to know how things worked. As a senior NCO I let Marines know that they’re cared about and they’re needed and that we’re all one big family.”

Half of his 14 years as an active Marine were spent recruiting, a natural precursor to his present slot with the NYPD. “I had the privilege to recruit and qualify men and women, many of whom are sergeants, staff sergeants, lieutenants and captains.” All of the 235 Marines he brought in were from the New York City area.

The war was looming at the date of this interview – and Kitsakos was secure. “I am concerned about sitting back here in New York while my Marines are out there. But I am absolutely wholeheartedly positive that our training and equipment is second to none.”

Born a New Yorker, his heart has always been home – both locally and nationally.

Before joining Kitsakos engaged in self exploration. He knew he wanted to be a part of two great organizations: the United States Marine Corps and the New York Police Department.

His career in the Corps was inspired by his father’s service in the Coast Guard. Although he died five years before Kitsakos graduated from boot camp, he’s sure his father would be pleased. “He drove me harder than any D. I. Discipline and respect were with me when I went to Parris Island. Although nothing can really prepare you for Parris Island, it’s a life-changing experience.”

Since his active duty years, Kitsakos has spent the last four years as a reservist. He has completed his bachelors degree from the John Jay college of Criminal Justice, where he is now attending working on his master’s.

“The Marine Corps has given me the opportunity to see things in life with a lot more humility. Things could always be a lot worse. It builds your resilience.”

With these years of Corps service behind him and more ahead, he relishes working in both of his endeared occupations. “I’m thankful and humbled that I’ve had this privileged.”