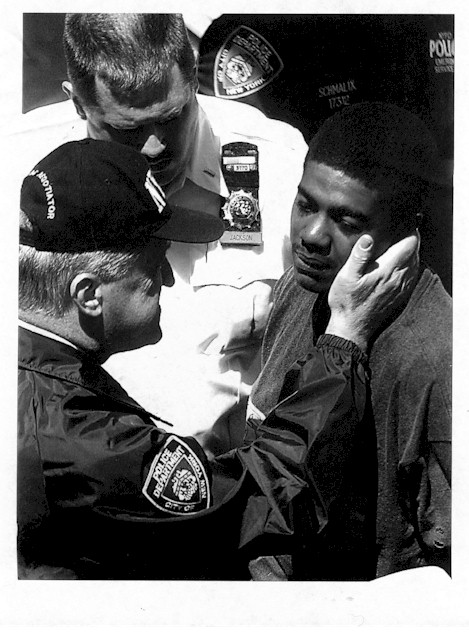 NEW YORK, NY – First Grade Detective and former Marine Tom Nerney walks quietly into the Skylight Diner on west 34th Street. His black suit, tailored shirt and perfect posture give away his Corps background. Just after dawn on this early-summer day in Manhattan, Det. Nerney is starting his day.

Just a few blocks from the docked USS Intrepid, he recalls how much the New York City cops enjoyed this restaurant’s food during Fleet Week last year. This year these cops are very different than they were when the big ships sailed in July 2001.

Soon, he’s across town to an auditorium at on of New York’s many medical schools. With some time to spare, he sits in his car, reflecting on his days in the Corps, 43 years earlier. He rattles off the better part of his chain of command while a recruit at Parris Island, including first names and middle initials.

In the auditorium, he is speaking to more than 100 detectives training to be homicide investigators. After two hours, the detective concludes his discussion with, “I owe all of my success to the United States Marines.” Whispered Marine slogans arose from the silence, delivered by his brothers in arms.

As he departs, his Marine compatriots gravitate through the crowd, to commend his devotion to their Corps. “Semper Fi,” he says smiling as he walks away down the marble floored corridor.

Lunch this day will be at an Irish-pub restaurant known as “the Met,” nestled in the municipal buildings of lower Manhattan. City Hall, a courthouse and a jail all adjoin the main police headquarters building. One must enter the cluster on foot, and pass through three security checkpoints before even entering headquarters.

Over a lunch of salmon and iced tea, the detective tells about his association with the local Marine Corps League, his efforts to unite NYPD Marines with their own association, and his long-term friends from both.

That One Day
The detective doesn’t want to talk about September 11, 2001, but he remarks, “we got a lot of people out of there.” Many of the 23 NYPD cops who died were from the Manhattan south area, just a stone’s through from the site, but not to mention the 37 Port Authority police officers and 343 New York City fire fighters and emergency personnel.

“It was my Marine Corps training that allowed me to live through it.” Its very easy to picture the detective becoming 23 year-old Corporal Nerney, USMC, as he and many others guided thousands out of the World Trade Center that awful day.

Devotion to the Finest
Det. Nerney has helped solve the cases of 22 slain NYPD officers, and continues to work on other cases, some recent, some old. He is the only detective in the Major Case Squad hunting cop-killers full time.

Linda Scheu’s husband, police officer George Scheu was killed when he confronted a car thief near his home in Queens. The officer, a United States Navy Reserve Petty Officer, was wearing his summer whites when enroute to his weekend drill. It took 14 years, thousands of hours and scores of detectives, but one day Henry Vega bragged to an undercover officer about the murder – on videotape.

In an interview for a New York Post story in May, 2001 Det. Nerney said, “If the cop in the street can’t believe that someone is watching his or her back and there’s a swift reaction to someone who has killed one of them, then it becomes more difficult for him or her to do their work.”

And on this summer day, Det. Nerney cuts short his interview to go brainstorm with other detectives on the murder of Robert Bolden, an officer killed more than 30 years earlier while off duty at a restaurant in Brooklyn.

He’s being forced to retire in September. But this detective, who has been recognized for not calling in sick even one day in his 36-year career, has not had enough. “I hate to leave,” he says with grit in his voice.

While A Leatherneck
Det. Nerney left his Queens home in 1959 to join the Corps. His brother James had joined a religious order to teach high school. The detective knew that was not to be his path. His father, proud but apparently stoic, let a tear fall upon the news of his son’s enlistment.

But the detective came by the fighter in him naturally. James Sr. was a combat veteran of World War I.

His five years in the Corps were busy. He was assigned to AIRFMF-WESTPAC and other duty stations and learned French and Japanese.

NYPD Captain Ernie Naspretto wrote a chapter about Det. Nerney for an upcoming book. He aptly wrote about the influence the Corps left upon this Marine, probably without even knowing he was doing so.

“Tom Nerney looked like a TV detective. He dressed impeccably and was immaculately groomed; his full head of closely cropped graying hair and mustache perfectly in place. He spoke in a deliberate, yet flowing professional manner. He rarely swore and showed respect to the uniformed officers and supervisors who were present. Although it was apparent that this detective was a confident true professional who knew he was excellent at what he did, there was nothing pretentious about him. His 5’9” medium build frame was not imposing but his piercing blue eyes and perfectly chiseled face sent a message, “Don’t even think about [messing] with me.” Those same eyes softened when he smiled and showed genuine empathy for crime victims and their families.”

The sentiment and experience of that or other onlookers does not change – despite the years since that piece was written.

Editors Note: Special thanks to Capt. Tom Moore for his invaluable contribution to this story.