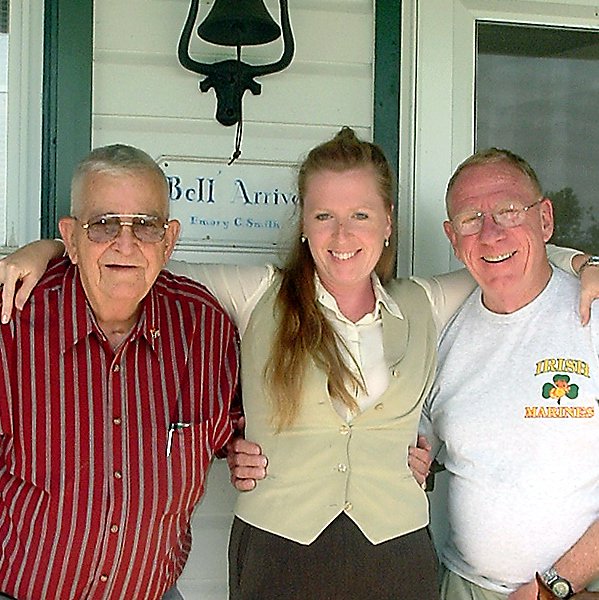 KANSAS CITY, KS – No moss is growing on Capt. Thomas Moore. At 68, this Marine’s Celtic connections and love of liberty inspire a complex life.

Capt. Moore left his hometown of Booneville, Missouri to join the Corps in 1951. He came up through the ranks and was commissioned as a Warrant Officer in 1961. His enlisted years included time as a Platoon Sergeant for the 3rd Marine Division in Okinawa, Japan as well as demolition and mine warfare training at Quantico, Virginia.

“Probably the most important years in the Corps,” for the Captain were spent as Logistics Officer (S-4) of the Combined Action Force in Vietnam from 1969 to 1970. The CAF provided protection for 114 villages and consisted of United States Marines and South Vietnam Popular Force troops. These 8,000 Marines and their national counterparts were distributed by placing a platoon in each village. They taught the villagers how to protect themselves via operations including building small buildings or bridges. These structures were then helpful for the nighttime ambushes, which were conducted in and around the villages.

“Of the 114 villages we protected, not one went back to communist control while we were there,” the Captain reports.

Capt. Moore retired from the Corps in 1974 to become a police officer – spending another quarter century serving his community.

During his years with the Fairway, Kansas Police Department, the Captain focused his expertise in counter-terrorism training. Subsequently he traveled nationally to deliver seminars on terrorism, bomb threat planning, explosive devices and combat pistol use.

Even today the Captain remains a sharpshooter and instructs for the National Rifle Association regularly.

He prepared for police work by his time in the Corps, and his commissioning contributed greatly to his appointment as Chief. “I was a 40 year old rookie,” he said referring to the start of his second career. “Marine Corps leadership paid off by the time I went into law enforcement. I had been used to making decisions really quickly which is an absolute must in police work.”

Capt. Moore continues with an illustration. Part of his duties was to prepare a budget. “I did it just like I did for a battalion.” Upon the budget being accepted, the Police Commisioner asked how he prepared it – and he told her. “I might have known,” she said.

Also during his law enforcement days the Captain’s writing interest surfaced in book form. In the 1980’s he authored Raggedy Ass Marines, and co-authored Green Side Out with Maj. Gene Duncan. The two have been friends for 40 years, and the Captain reports that there has never been a harsh word between them.

Last year retirement faced him again, this time after 24 years with the police department. Now it was time to pursue matters of the heart.

About seven years ago the Captain gained membership in the Ancient Order of Hibernians, which is the oldest Catholic lay organization in America. The Captain aquatinted himself with his Irish heritage by participating in the Order’s activities related to political issues on the emerald isle.

His background in the Corps and law enforcement gained him the credibility to act as an international observer for the Lawyer’s Alliance for Justice. In this capacity the Captain stood-by during the traditional political marches reflecting the still unsettled religious-based conflicts in Ireland. He has traveled there four times in the last six years.

The Kansas City division of the Order has developed an extraordinary program, which brings forth the Captain’s deepest social concerns. Every July, during the season of political marches, the Order’s program titled Children for Peace in Ireland, goes into action.

Twelve Irish children, six Catholic, six Protestant; six boy, six girls, come to Kansas City for two weeks of great times across the ‘pond’. They are housed in member’s homes with children of the same gender. They spend the week going to Royal’s baseball games, amusement parks, fireworks displays and other fun events.

The purpose is to expose these future voters to desegregation and inspire them to share their new perspective upon returning home. “When they get off the plane, you see two distinct groups. When they get back on the plane they’re all laughing and hugging, one group.”

However all is not well in the Captain’s world. His wife of 44 years, Lela, is swimming in difficult waters. She is presently treating for cancer in the brain and the lung. “I can’t understand why it isn’t me suffering from this illness instead of her. I’d trade places with her in a minute if I could.”

He reports that through his years serving his country and community, he has friends and loved ones praying for her all over the world – but welcomes more.

The Captain concludes about the pattern of his life experiences. “Leadership training gives you some pretty good values; love of country, importance of family. I fly the Marine Corps and American flag outside my home every day. Thus far I think my Marine Corps years have had a positive effect on my family. None of my family is afraid of open patriotism, even before September,” the Captain reflects, “I know my children are proud of me.”

Editors note: Special thanks to Maj. Gene Duncan for his invaluable contribution to this story.